Just about everybody knows by now that 2017 marked the 50th anniversary of the Camaro. Chevy is certainly doing its part to raise awareness, starting with introducing a special 50th-Anniversary Camaro SS to pace the 100th running of the Indianapolis 500 on May 29, 2016. If that weren’t enough, the pace Camaro was driven by none other than Roger Penske in his 50th-anniversary year as a team owner—a streak that started with fielding the original ’67 Camaro in the Trans Am series with driver Mark Donohue. The Anniversary package that debuted on the pace car is now offered on the 2017 Camaro. It includes features seen on the pace car like the package-exclusive 20-inch wheels, a special grille and hood stripes, specific “Fifty” fender badges, and special leather upholstery and interior treatment. While the pace car was white, the Anniversary road cars come in Nightfall Gray Metallic. Both Auto World and Maisto produce 1:18 models of the Anniversary Camaro—Auto World has the white pace car, while Maisto is releasing the gray production version. Given their price points ($100 versus $30), they are obviously not direct competitors, but it’s still cool to see them door to door and both are worthy additions to a Camaro collection. To see more of both cars, check out our expanded coverage at DieCastXMagazine.com.
autoworldstore.com; maisto.com 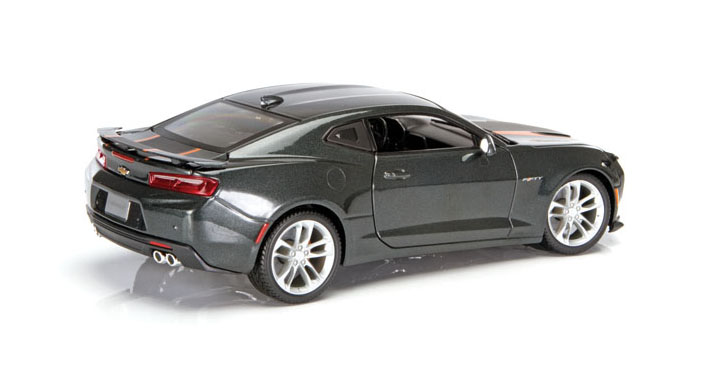 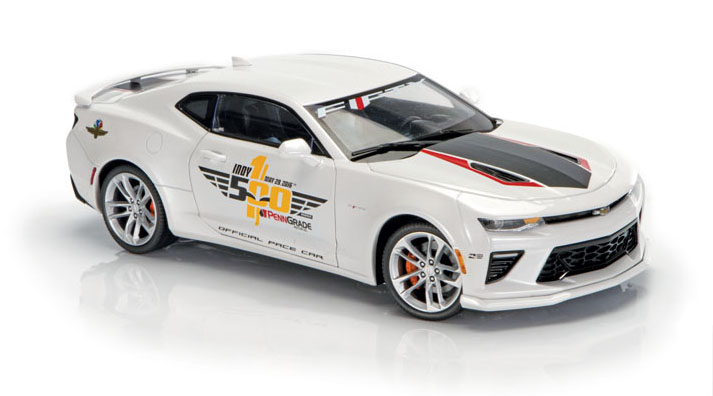