By Matt Boyd
Long before alphanumeric model names became the norm in the luxury sports segment, Oldsmobile was ahead of the curve. And while Oldsmobile’s image slid into obsolescence in recent decades (unfortunately leading to the division’s demise in 2004), in the 1950s and ’60s, Olds was seen as a sophisticated performance machine. The heyday began in 1949 when the “Rocket” 88 was introduced; its 303 V-8 made it the fastest thing out of Detroit, and today it makes a convincing case for being the first muscle car. 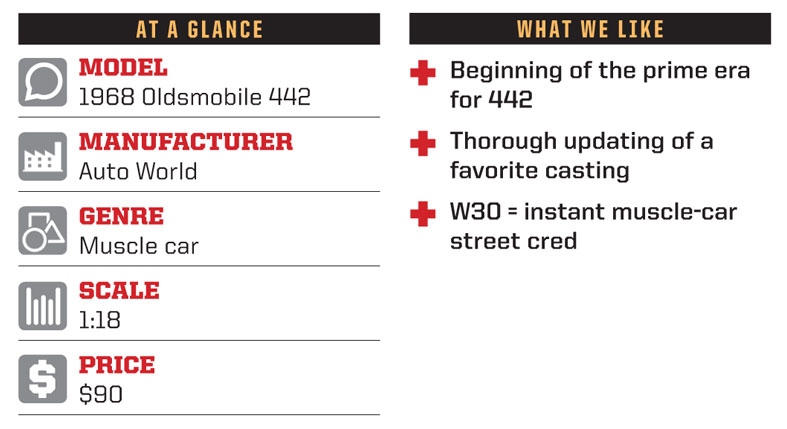 A decade later, Olds entered the sporty compact fray with the F-85, sharing a unibody Y-platform and innovative aluminum V-8 with the Buick Skylark and Pontiac Tempest. Those three siblings would move up to an intermediate body-on-frame chassis for 1964 and enjoy larger, more powerful engines. Olds had assigned its sporty 2-door F-85s the name “Cutlass,” but when Pontiac introduced its “GTO” version of the Tempest, Oldsmobile decided the Cutlass needed sharpening. Engineers raided the Police Package parts bin to produce the B09 package, which consisted of a heavy-duty police suspension, a special high-output 330ci V-8 (good for 310hp), and a sporty manual transmission—along with subtle “4-4-2” fender badging calling out the 4-barrel carb, 4-speed gearbox, and dual (2) exhaust system. The option package would not be officially named the “4-4-2” until the following year, but nevertheless, the legend had begun. That legend grew—along with engine size and output (to 400ci/345hp)—in ’65, and again in ’67 with the introduction of “Outside Air Induction” (don’t you dare call it “Ram Air”), better known by its option code: “W30.” 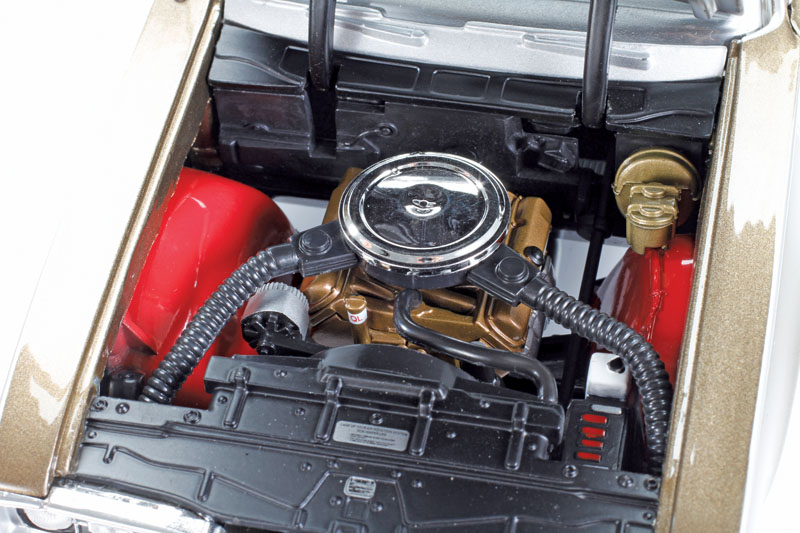 Bronze-colored engine block, twin snorkel cold-air induction, and bright red plastic fenders are all signature features of a ’68 W30—and the model has them all. 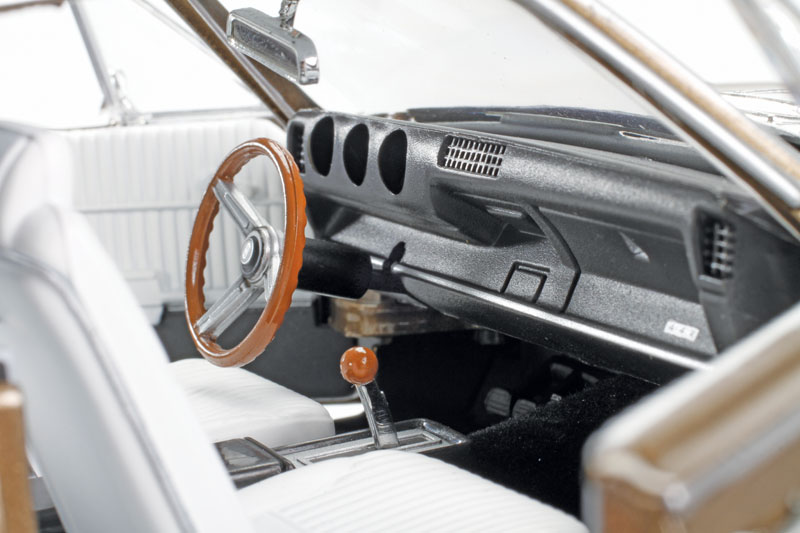 The white interior with black carpeting is true to life and looks great. The only miss is the pedals: The gear lever and transmission housing are for a TH400 auto, but the floorboards have a clutch pedal. 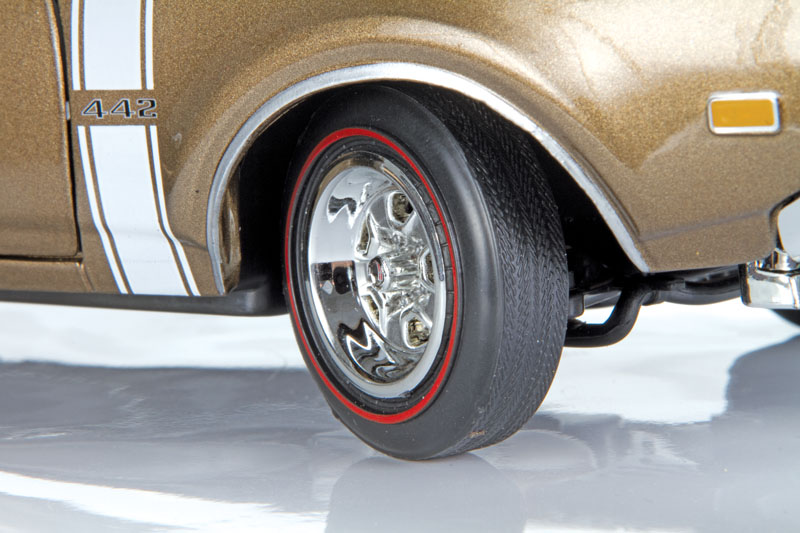 Olds introduced the famed SSII wheel pattern in ’68, and these wheels have the correct argent gray centers with silver painted edges. 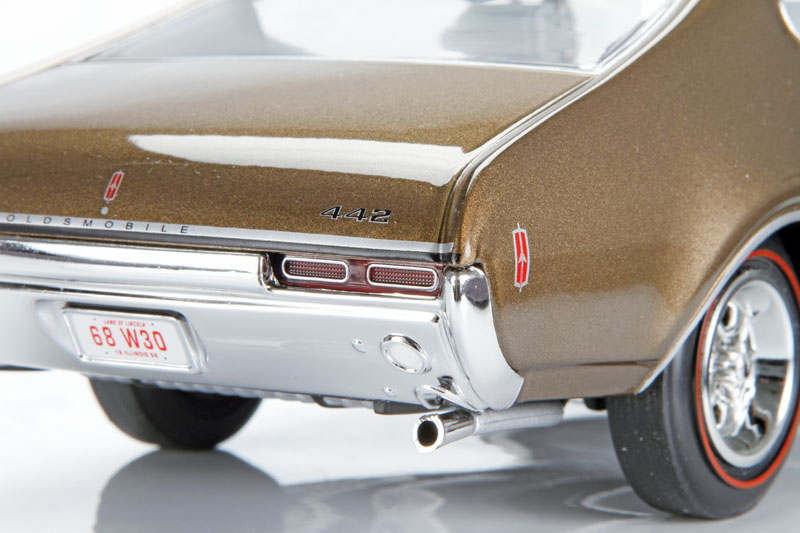 The badging is painted rather than etched but is deftly applied and looks great. The “2” in “442” was for dual exhausts, which is fully molded on the model.

Another leap forward came in 1968 with the launch of an all-new body style, at which time the 442 was split off into its own separate model instead of being an option package on the Cutlass. There was a new motor too—still 400ci but with a torquey long-stroke crank shared with the new 455 available in full-size Oldsmobiles. The W30 was again the top engine option, identified by scoops under the corners of the front bumper that fed cool outside air straight into the engine. Checking the W30 option also got you a 10-bolt limited-slip differential, and all 442s got beefy anti-roll bars and other suspension upgrades as in previous years, making it among the best handling of all muscle cars. For many, the ’68 is the beginning of the best years for the 442 and the W30 is the best of the best, making this Cinnamon Bronze Holiday Coupe from Auto World something special for collectors.

The 442 shared its A-body platform with siblings from Buick, Pontiac, and Chevy but for many GM muscle fans—myself included—the Olds is the most attractive of the bunch. Gone was the boxy F-85 bodywork of the previous generation, replaced by a curvy new coupe with prominent fender bulges, sweeping rear glass, and a bullet-shaped C-pillar that enhances the dramatic profile—especially on this Holiday Coupe. The triple vertical stripe behind the rear wheel was optional on all 442s but W30 cars got them standard, and the white matches the interior. This is an updated version of the old Ertl 442 casting, so the badges are screen-printed rather than cast or etched pieces, but they are well rendered with nice crisp lines and edges on the scripts. The trim and molding—and the Olds has quite a bit—is painted on, and that’s really the only obvious place where the model reveals its origins. The front fascia is nicely done; effective use of flat black paint enhances the look.

Doors swing open on old-school doglegs, but the throw is pretty good and the hinges are nice and firm. It’s worth noting that the car has wing windows; 1968 was the last year for them on hardtops and convertibles, although they hung around a while longer on 2-door post cars. The black carpet, lower door panels, and console are all correct for white interior cars like this, the bucket seats are nicely shaped and trimmed, and the seatbacks even fold forward. The gauges are well detailed, but some of the other switchgear could use a little paint to pick them out. The biggest question mark on the interior concerns the transmission. The gear lever is for the Turbo Hydramatic 400 automatic, but there’s a clutch pedal in the footwell. The TH400 was available on the W30, but only 319 such examples were built in ’68 (compared to more than
1,100 4-speed W30s). Either would be authentic, but the shifter and the pedals do need to match, and as we’ll see when we get to the powertrain, the error is the pedal set.

Speaking of that powertrain, let’s get to it! The hood is heavy on this model and the hinges don’t want to stay open on their own, so to really enjoy the motor you may need to fashion yourself a prop rod. This is a W30, so the pair of 4-inch-diameter air ducts fed from the bumper scoops is the central feature. The ducts themselves are just a tad too thin, and due to the duct routing, the windshield-washer reservoir was relocated to the passenger side on W30s, but this model still has it on the non-W30 driver’s side. Those two quibbles aside, the motor matches OEM spec quite nicely. While that air induction setup is the engine bay’s centerpiece, checking the W30 option also netted you special D-port heads, and usually a 328-duration cam (more on that in a minute). The W30 was laughably underrated at 360hp—just 10 more than the standard 442. In reality, the W30 equipment added 40–50hp along with a mountain of torque! That rowdy cam sacrificed idle vacuum though, making power brakes impossible. Olds thought that might be a problem for some customers, so it devised a workaround. W30 4-speed cars had only manual brakes, but it was possible to order power brakes with the automatic—at which point a tamer cam was substituted, sacrificing a little top-end power for drivability. This appears to be how the Auto World W30 is spec’d out as there is a power-brake booster on the firewall and the transmission housing is the TH400. Also note the bright red inner fenders; these are absolutely correct. All W30 cars had specially molded red plastic fender wells in place of sheet-metal ones to allow the air ducts to pass through from the bumper.

One of the things that makes muscle-era Oldsmobiles so stylish are the wheels. Olds introduced the Super Stock II (SSII) wheel for 1968, and the look would define Olds performance cars for the next 20 years. For ’68, they measured 14 inches with the centers painted argent (gray) and the holes rimmed in silver with a thick outer chrome ring. The ones on this car are a little oversize, but the detail and coloration are both very good. The tires are convincing replicas of the stock Redline
F70-14 bias plys, even if they lack the official “Firestone Wide Oval” sidewall scripts.

Final Thoughts
The Olds 442 is often labeled a “luxury” muscle car—the implication being that it is not a machine singularly focused on performance, and therefore somehow less pure than some other muscle cars. To dismiss a 442 on the basis of its style and creature comforts is to risk an embarrassing reality check, particularly in the W30’s case. Oldsmobile’s most potent performer was a legitimate 13-second car off the showroom floor—quicker than many of those pure muscle machines. Auto World’s model is a nice update of the classic 442 casting; the extra detail and the added cachet of the W30 hardware add even more appeal. Auto World does need to sort out the correct pedal set, but all in all, the Cinnamon Bronze W30 is a fine way to commemorate the pinnacle of Oldsmobile performance. ✇