﻿Brains and Brawn in a Futuristic Hydraulic Loader

The selection of machines manufactured under the Caterpillar brand seems limitless: industrial equipment of nearly every size and description serving functions so diverse they would be impossible to list. That is how a company like Diecast Masters can devote itself to modeling Cat products and be constantly coming out with new and interesting models.

And because Cat itself manufactures its products to complement each other, working seamlessly in concert to accomplish projects of enormous size and complexity, Diecast Masters likewise manufactures its models to interact—their scale and range of functional features naturally allows the models to be displayed together as they function. That presents an extra level of engagement for collectors, as each display combination becomes truly one-of-a-kind.

What we like
+ Multilink metal tracks look and rotate realistically
+ Boom is fully posable, and its hydraulic pistons flex
+ Scale accurate cabin opens to allow placement of operator figure

This time, we are taking a look at the new High Line series 49-ton hydraulic loader: the 349F L XE. The model is so new, in fact, that Diecast Masters had a preproduction sample shipped to us directly from their factory overseas before the packaging had even been finalized. By the time production pieces reach collectors, the model will include the usual High Line metal pre­sentation box (we’ve come to think of them as “lunchboxes”) with photos of the actual 349F in action, along with specs and other information screen-printed on it. It really is some of the nicest packaging we see on any model these days.

The 349F L XE itself is a technological marvel. When it was launched in 2017, it introduced information and control systems that would have been previously unimaginable. It starts with Cat’s exclusive Adaptive Control System valve—the smart valve integrated into the pump that routes hydraulic pressure quickly and precisely to all the vehicle’s functions, increasing its speed and effi­ciency. The 349F also offers a quick coupler and tool control system, with memory functions that store the pressures and flows for 10 different boom attachments, allowing quick changes between tools. But the most impressive innovation is probably the Cat Production Measurement system, which actually weighs the payload in the bucket as it moves to the truck, keeping track of precisely how much material has been loaded. And it can upload that info wirelessly, to be monitored remotely. All that is in addition to the 349F’s physical capabilities, which include a bucket that is able to lift 35 feet up, can dig
25 feet below the surface, and has a drawbar pulling strength of more than 75,000 pounds.

So, as one of the newest, strongest, most advanced vehicles of its type, it was the perfect candidate for Diecast Masters’ newest model. Like other High Line series models, it comes in 1:50 scale and is constructed primarily out of sturdy diecast metal for the undercarriage, superstructure, and boom, giving it substantial heft. The paint perfectly matches Cat’s signature yellow, and the Cat brand insignia and model designation behind the cabin and on the boom are screen-printed. Those are augmented by warning labels at various places around the model. There are rubber lines and fittings at the base and along the boom that attach to the hydraulic pistons at each of the hinges. Those pistons are functional and telescope when the boom is articulated.

The superstructure is nicely detailed, with cast-metal steps and molded-plastic railings. There are cast-in panel lines and grab rails around the surface as well as screen-printed engine-cover vents. There’s an exhaust stack at the right rear corner, and the operator’s cabin is at the left front. The frame of the cabin is cast metal, with clear plastic windows and a removable roof panel. This last detail allows access for placing the included operator figure, and gives an even better view of the interior with its seat and molded control levers. Below the cabin sits the undercarriage; the treads have metal links and rotate smoothly on sprockets and guides. The superstructure rotates 360 de­grees, and the boom is hinged in three places, allowing a range of motion that matches that of the full-size 349F. 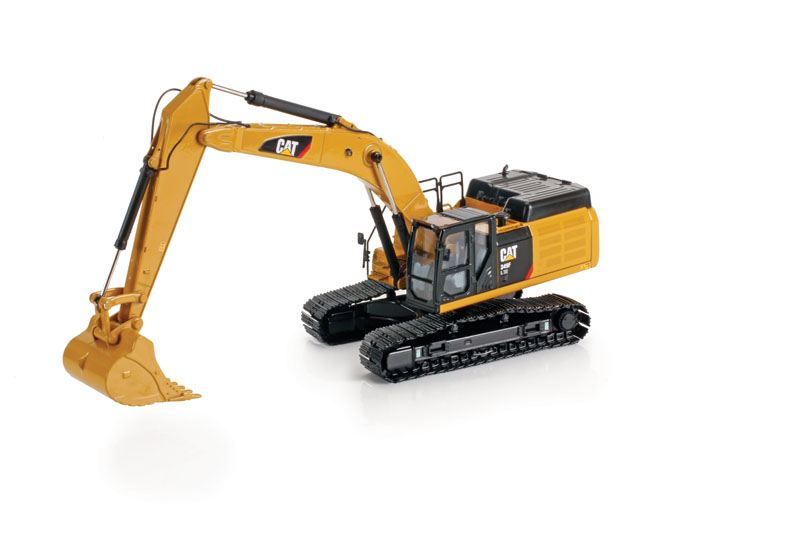 There is a scale operator figure at the controls. The roof of the cabin lifts off, so the figure can be installed or removed. 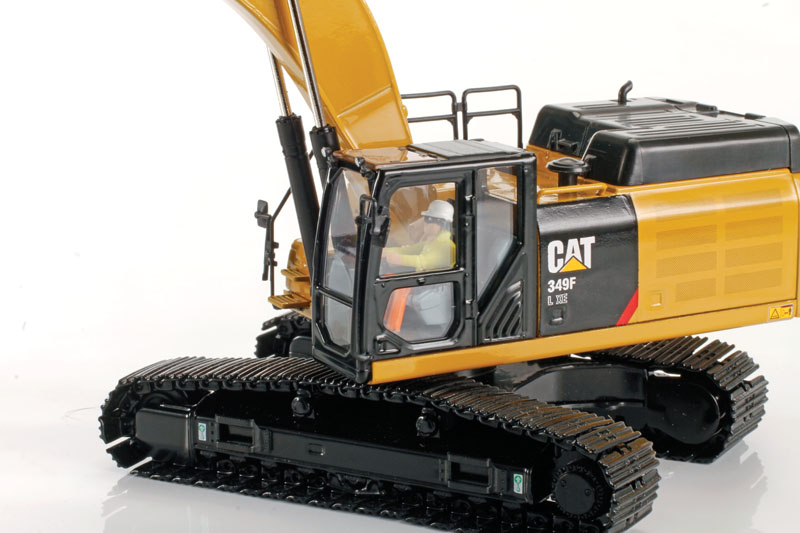 Final Thoughts
We’ve now reviewed a few Caterpillar models from Diecast Masters, and a few patterns have emerged. All feature meticulous surface detailing, sturdy metal construction, and a level of articulation that encourages collectors to pose them in dioramas with multiple models. The 349F L XE is Cat’s newest and most sophisticated hydraulic loader in this class. It makes an impressive model on its own and is a perfect complement to any of Diecast Masters’ dump trucks, thanks to the fully adjustable boom and bucket. And given the sub-$100 asking price, a multimodel display is well within the budget of almost any collector. Dealers are already taking preorders, and this one is not to be missed.

by the DCX Crew