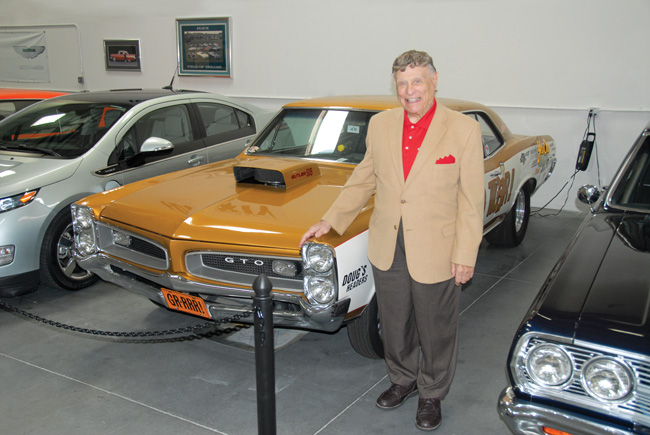 Usually, when a marketing executive is good at his job, it’s his client—his product—that becomes the legend. But Jim Wangers is far from just your usual marketing guy. Jim is a car guy through and through. He’s also a racer, a visionary—bold and creative and more than a little wily—and the principle architect of one of the most memorable and effective automotive marketing campaigns of the last half century. The Pontiac GTO would not have been the success it was without his vision. Very probably the muscle car phenomenon would not have been what it was had Jim not understood so perfectly what resonated with young, performance-hungry buyers. But his influence at Pontiac went far beyond the GTO. He was instrumental in cementing Pontiac as the performance brand in the minds of the enthusiast market. Jim has earned a considerable measure of fame for his efforts—along with the gratitude of Pontiac enthusiasts the world over—but ironically, he never actually worked for GM directly. Rather, he worked for the ad agency Campbell-Ewald that serviced the GM account, and then later McManus, John and Adams, with the Pontiac account. Nevertheless, his impact on Pontiac’s image during that era was enormous. A great deal of his “street cred” with GM management and enthusiasts alike was earned behind the wheel rather than behind a desk. Deep in his heart, he is a car guy and racer first and a marketing powerhouse, second— something that is apparent the moment you meet him. 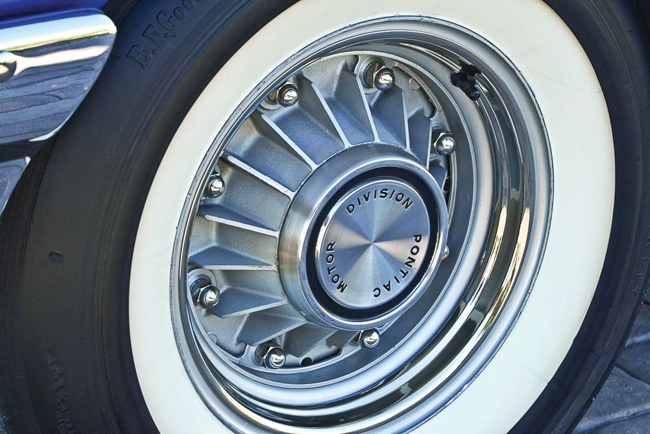 Above: The 8-lug wheels with integrated aluminum brake drums were a technical and styling novelty that sold a lot of Pontiacs. 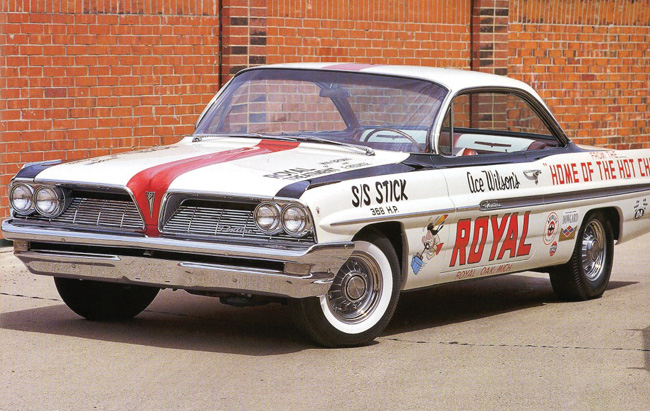 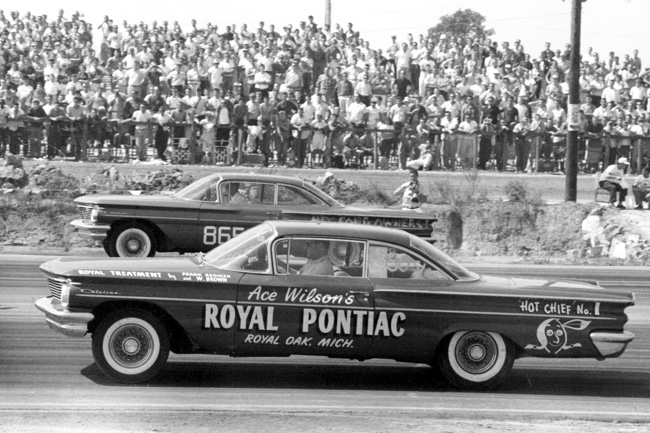 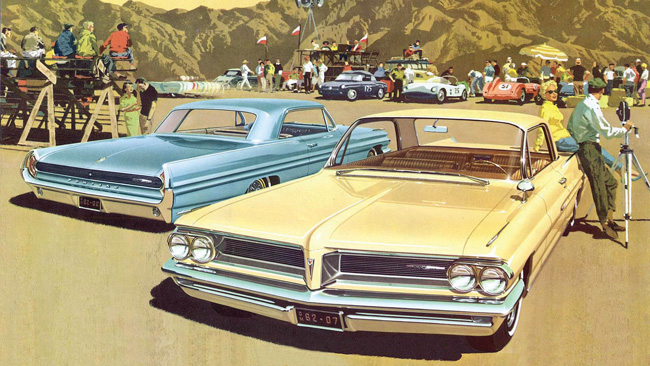 Jim grew up around Chicago and attended Illinois Tech’s School of Engineering. He explains that he loved cars and thought he wanted to be an automotive engineer, but he struggled with calculus and physics. “A wise counselor convinced me that getting the cars sold was as important as designing them, and maybe my talents were better utilized in marketing and advertising.”

With ad writing stints at the Chicago Daily News, Esquire Magazine, Kaiser-Frazer, Campbell-Ewald (for General Motors) and then Dodge, he earned a reputation for being in touch with the newly defined “youth market” consumer segment. So the ad agency McManus, John and Adams, which had the Pontiac and Cadillac accounts, hired Jim in 1958 to focus on Pontiac. “Bunkie” Knudsen had just taken the helm at Pontiac, and an engineer named John DeLorean was enjoying a meteoric rise through Pontiac’s management. Knudsen put Pontiac on a new course, discarding its dowdy family car image for one based on performance and style. As Pontiac’s Chief Engineer, DeLorean had developed a number of new features that supported this change in direction. Best known was “Wide Track,” introduced in 1959. It pushed the wheels out into the widened fender wells, giving the cars a squatter, more planted look. T e accompanying 8-lug wheels (along with aluminum brake drums) are still considered one of the most beautiful automotive accessories ever made. “Those 8-lug wheels sold a lot of Pontiacs!” Jim recalls. 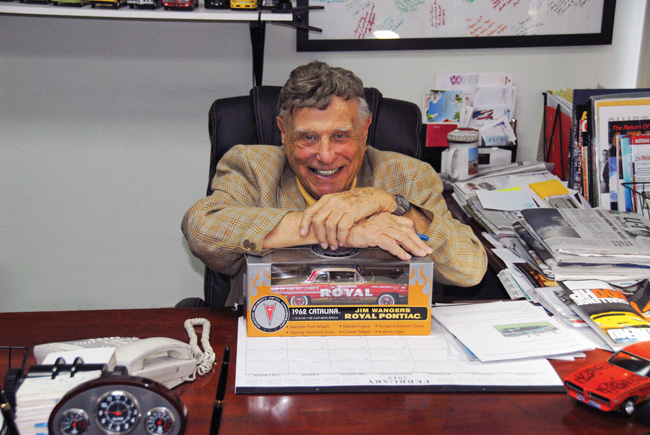 Above: Jim keeps many of his prized diecasts right there on display in his office.

Jim further pushed the Pontiac performance image by getting dealers to sell customers cars with features that enhanced power and handling rather than just the rudimentary “plain vanilla” cars found on the dealerships’ back lots. He also worked with the dealers’ Parts Departments to order high performance parts to be retrofitted to the cars of customers wanting more “stoplight juice.” T is program was test-marketed at Royal Pontiac in Royal Oak, Michigan, just off of Woodward Ave. and halfway between downtown Detroit and Pontiac’s headquarters in Pontiac, Michigan. It should come as no surprise that Woodward Ave., 21 miles of arrow-straight highway heading north out of Detroit would become a hotbed of street racing with the local gendarme often turning a blind eye to the goings-on. And Jim was in the thick of it; his name will forever be indelibly linked with the street racing and cruising that was so much a part of Woodward Ave. and the Detroit car culture. Jim had a wonderful relationship with Royal Pontiac owner Ace Wilson and unofficially ran their performance program. In 1960, Jim piloted a Royal-sponsored Pontiac Catalina to a Top Stock Eliminator title at the NHRA Nationals in Detroit.

During his years with Pontiac, Jim is probably best known for his work marketing the famed Pontiac GTO. Although the “Goat” wasn’t his idea, (the brain trust of DeLorean and engineers Russ Gee and Bill Collins came up with it while playing around with chassis/engine combinations at GM’s Milford, Michigan proving grounds), Jim came to be known as the “Godfather of the GTO” for the work he did to bring the first GTO to market and kick off the Muscle car Era. It was during this time that Jim really cemented his relationship with John DeLorean, who had been promoted to run Pontiac when Knudsen moved up to head General Motors. Other people sometimes had to wait days or even weeks to get a return call from the new Pontiac boss, but Jim tells us “I could always get right through to DeLorean when I needed to talk to him. We had a great relationship.” 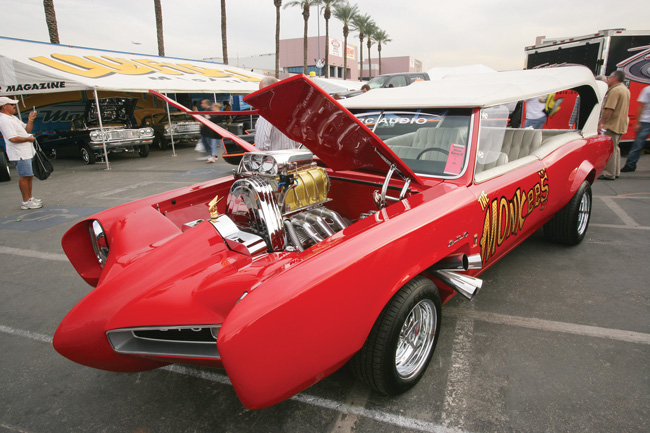 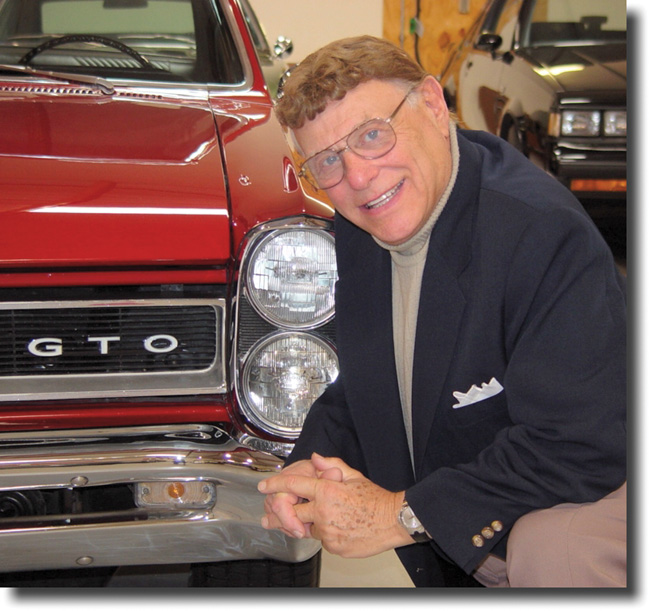 Top: “Although gaudy and stupid-looking, it turned out to be one of the most remembered TV/movie automotive tie-ins.”Bottom: The Godfather of the GTO next to the legend he helped create.

Jim also helped develop ad and promotional programs for the 1968- 69 GTO “Judge”—named after Rowan and Martin’s “Laugh-In” TV show and their catch-phrase “Here come ‘da Judge.” Jim facilitated The Monkeemobile, a Dean Jeffries-modified GTO built for the TV show “The Monkees”, the black & gold Pontiac Firebird 400’s used in the “Smokey and the Bandit” movies with Burt Reynolds and numerous other ad campaigns, not all of which went according to plan. One incident Jim recalls with the Monkeemobile: “I thought I was really in trouble with the Monkeemobile. Jeffries didn’t use any of the suggestions that our designers gave him for the car. When people started calling it “Wangers’ Folly”, I thought this project would ruin my career. But it all worked out in the end.” Indeed. At its peak, DeLorean’s cars and the Wangers’-led marketing put Pontiac in the #3 spot of all domestic auto brands.

In 1972, Jim Wangers left McManus, John & Adams and went on to work for George Hurst at the Hurst Corporation, a builder of automotive shifters and other performance products, as well as specialty conversions of existing production automobiles. He then eventually opened his own automotive marketing and consulting firm, AMCI, where he is still active today.

Jim is an avid diecast and automobilia collector and has1:18 scale diecast models, many of which are of the cars that played an important role in his career and life. He shared some of his favorites with us during my visit and gave us these thoughts on them: 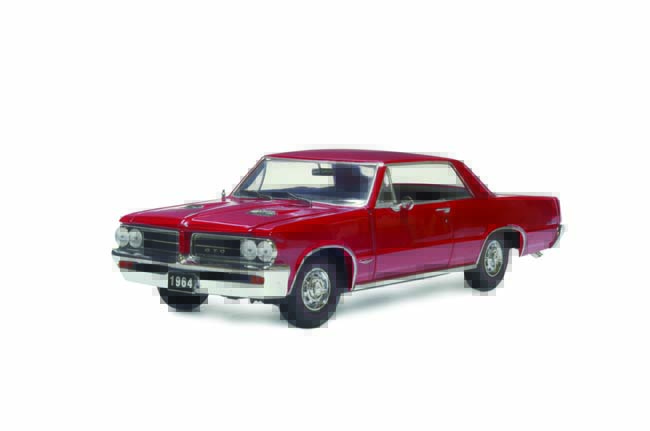 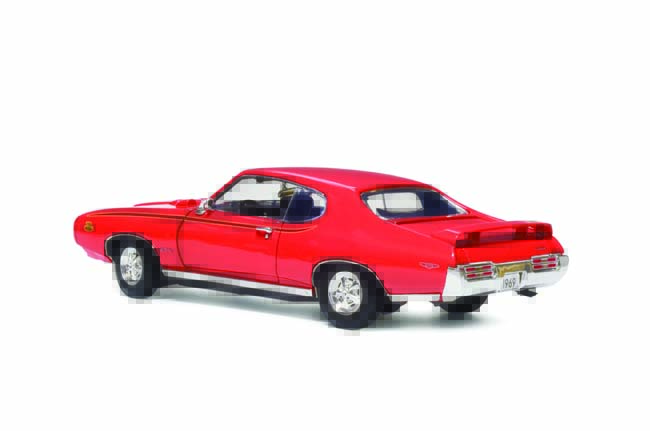 “Of course in Carousel Red! This was Pontiac’s spoof of the contemporary performance car trend.” (Ertl). 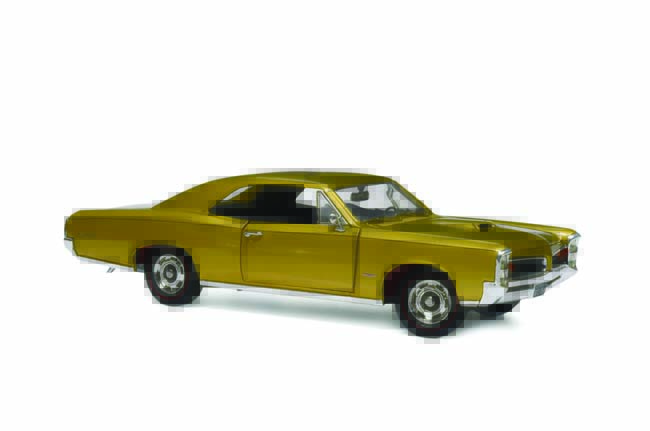 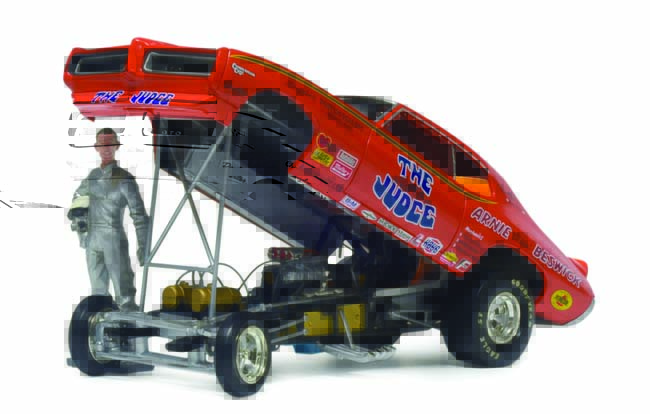 Jim’s well-crafted performance image for Pontiac was campaigned on the dragstrip as well as the street. (Ertl). 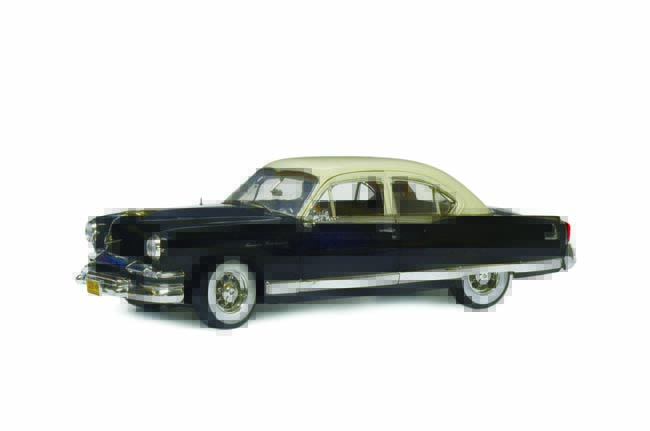 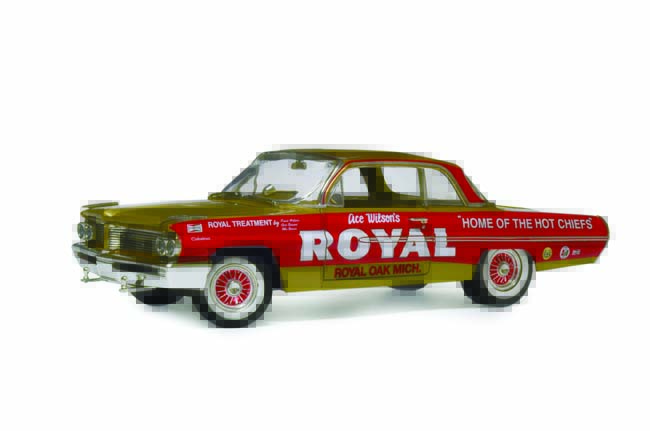 “My favorite drag-race car. It was released by Pontiac with many factory aluminum parts.” (Ertl). 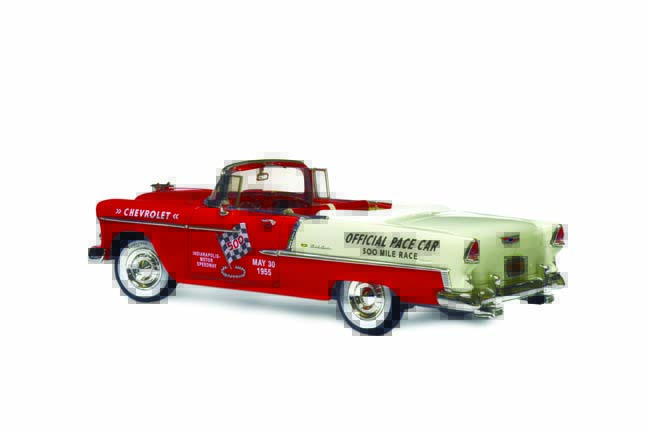