DCXMag.com
Featured News, From the Magazine

As you read this, the 68th Formula 1 Championship Season has just come to a close. Mercedes has secured its fourth consecutive Constructors’ Championship with the help of Lewis Hamilton, who also won his fourth Drivers’ title, tying him for third place all-time. The 32-year-old Hamilton is at the top of his game, so only time will tell how many more championships he might have in him. But he’s already sufficiently accomplished to rate among the first releases in a fascinating new series of Formula 1 models in 1:43 scale from Panini Collections (f1carcollection.com). The cars are accurate in their replication of shape and livery (although federal regulations now prohibit replicating the tobacco promotion logos, so the models must omit those). One of the features that make Formula 1 The Car Collection so appealing is the exhaustive research that goes into the models—which subscribers get to experience first-hand through beautifully illustrated magazines that accompany each release. They provide tons of history about the driver, background about the season and the drama that unfolded, and fascinating technical info about the cars themselves. It is valuable reference material in its own right, and most collectors will want to keep the magazines right alongside the models themselves. The collection is set up in a subscription format, and is currently projected to cover 60 F1 cars spanning the history of Formula 1. The first five releases have already been announced, so let’s take a look! 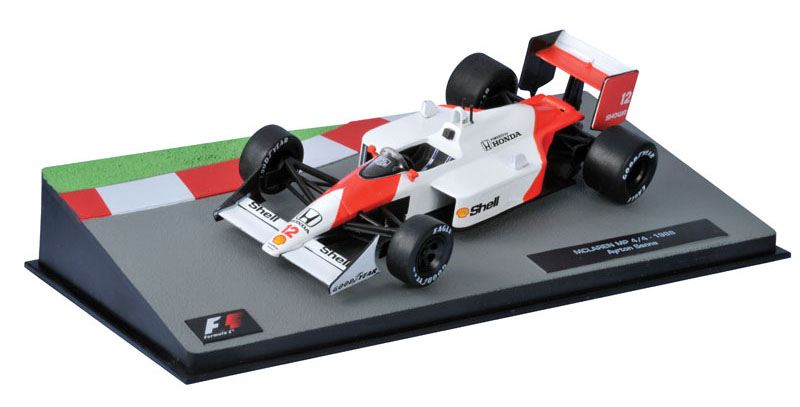 1988 McLaren MP4/4—Ayrton Senna
If one were to rank the most impactful, most dramatic, and most influential drivers in F1 history, Ayrton Senna would be a fine place to start. And what better car than that of his first championship—scored in his debut season with the McLaren team and over his two-time World Champion teammate Alain Prost! The McLaren MP4/4 would be the final winner of the first turbo era, winning 15 of the 16 races—eight for Senna to Prost’s seven—and establishing the Senna legend.

1977 Ferrari 312T2—Niki Lauda
Niki Lauda rebounded from the epic battle with McLaren’s James Hunt for the 1976 Drivers’ title by taking the ’77 Championship on the strength of consistency. He won just three races in his Ferrari but scored 10 podiums to best the fast but fragile Mario Andretti–driven Lotus-Ford, securing both the Drivers’ and Constructors’ titles despite quitting the team with two races to go!

2014 Mercedes F1 W05 Hybrid—Lewis Hamilton
In just his second year with his new team, Lewis Hamilton established himself as the new power in F1 and the Mercedes as the dominant team in the new hybrid turbo era. He and teammate Nico Rosberg won 16 of the
19 races, with Hamilton winning a career-high 11 races and easily sweeping to his second Drivers’ title.

1992 Williams FW14B—Nigel Mansell
Veteran Nigel Mansell was contemplating retirement after the 1991 season, but team principal Frank Williams convinced him to have one more go—and both are certainly glad he did! The technical marvel that was the FW14B featured active suspension, automatically tailoring grip and balance for each individual corner. The advantage helped Mansell win nine races in 1992 and finally secure himself a Drivers’ Championship.

1972 Lotus 72D—Emerson Fittipaldi
1972 marked the debut of one of the most recognizable racing liveries of all time: The John Player Special sponsorship bathed the Lotus in a lustrous black with gold accents. The paint and trim scheme is unmistakable, as is the lithe silhouette of the 72D, which, following a series of evolutionary changes in 1970–71, finally rea­lized its potential in the hands of Brazilian ace Emerson Fittipaldi, who drove it to the first of his two championships.

How It Works
When a subscriber signs up at f1carcollection.com, he or she receives Senna’s McLaren MP4/4 for a promotional price of just $4.95, including shipping. After that, the cars arrive in pairs roughly once a month and cost $19.95 each, plus a combined shipping cost of $4.95. The deal also includes a handful of bonus gifts like DVDs and a binder to hold your magazines. The gift items continue periodically if you stick with the subscription, but there is no obligation or minimum number of cars to buy, so collectors can cancel at any time. 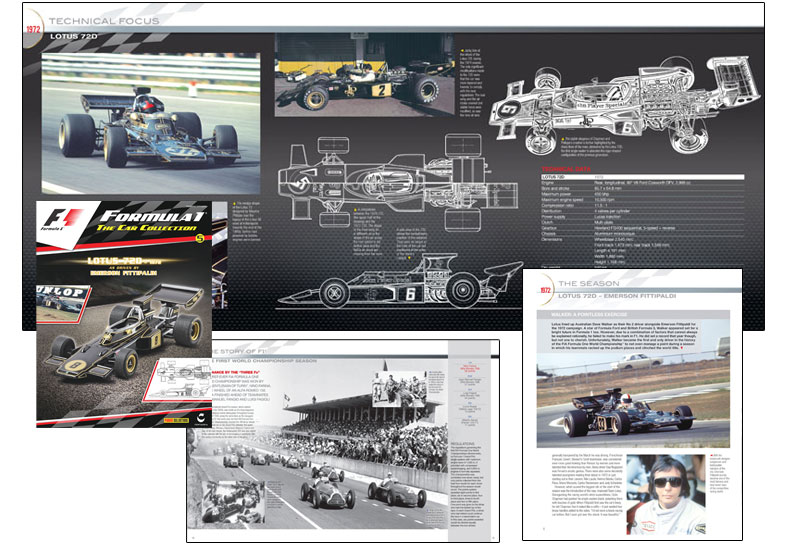