Like most of the 1950s Chrysler show cars, the 1954 Dodge Firearrow III and IV were fully functional, and with 315 cubic-inch Hemis under their hoods, they performed quite well. Gene Casaroll, founder of truck builder Dual Motors, was so taken with the Virgil Exner design that he bought the rights to it, had it reworked for production, and sent it back to Italian coachbuilder Ghia, who had put together the original show car for Chrysler. The Dual Motors “Firebomb” convertible debuted at the 1955 Geneva Show, but it was uncomfortable to sit in and handled poorly. So Casaroll had it redesigned again by his friend and soon-to-be Vice President Paul Farago, and the “Dual Ghia” went on sale in late 1956. It was exclusive (just over 100 were built) and expensive ($7,646 for the base model), and it became a favorite among Hollywood celebrities of the day, led by Frank Sinatra and the Rat Pack, Lucille Ball, and Eddie Fisher. 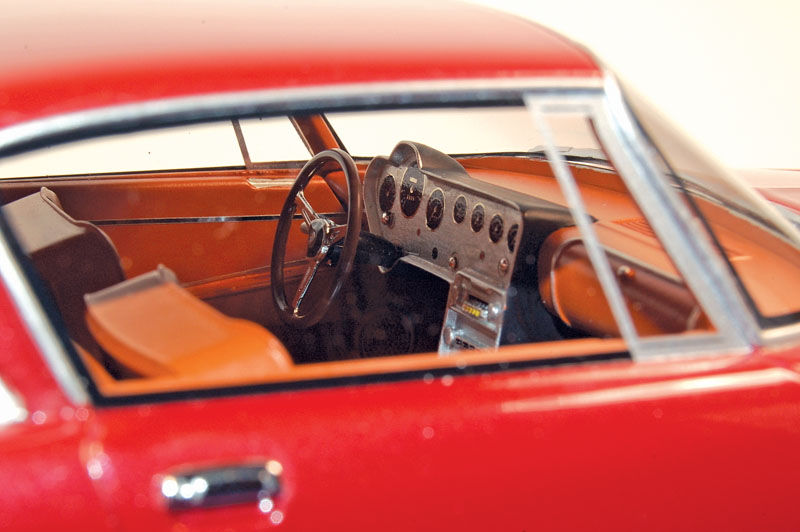 Above: The large expanses of “glass” give an excellent look at a dashboard with lots of chrome accents. Below: The double-row photo-etched wire wheels are especially realistic. 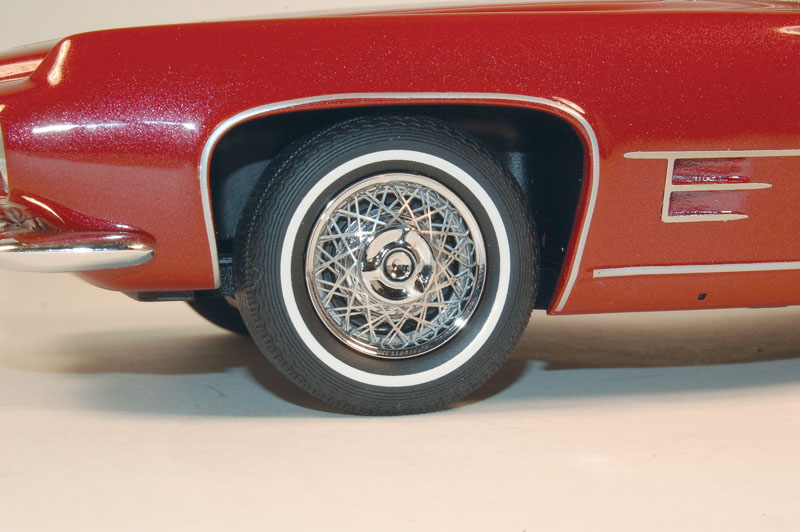 But by 1958, the Dodge subframe parts were no longer being made, so production of the Dual Ghia ended. Casaroll, now fighting cancer, soon sold the rights to a company set up by Farago and the CEO of Carrozzeria Ghia. Farago designed a new chassis, still using Chrysler parts, and induced Virgil Exner to create a new coupe body with exceptionally clean lines, minimal rear seats, a 383 V-8 (6.4-liter) Chrysler “wedge-head” engine, and air-conditioning. Production of the Ghia 6.4L (no “Dual” this time) began in late 1960; Frank Sinatra bought the first one made and, again, the Rat Pack followed suit. But at almost $15,000, there just weren’t enough celebrities to make it profitable; only 27 were built before the Dual Ghia/Ghia 6.4L story finally came to an end.

Best of Show’s big new resin-cast model is every bit as good-looking as the original. That long coupe body and its metallic burgundy paint are simply superb. Front-end details varied a bit among the cars, but the single round headlights with parking lights and horizontal trim inboard of them and the lack of fins would make this a late 1960 or early ’61 car. Most of the exterior trim—and there’s a lot of it—is crisply printed in silver that’s not quite as bright as the plated bumpers, grille, and tunneled taillight housings. It’s curbside (although there is some basic chassis detail), but all that clear “glass” makes it easy to see the well-detailed and realistic interior. Up front, seat and door-panel details are accurate, and there’s lots of chrome trim printed on the busy console and dash. The latter has a full complement of detailed instruments; the centered tach is correctly larger than the others. In back, the plush rear seats are occupied by a set of fitted suitcases. The especially realistic double-row photo-etched wire wheels are the final touch on this accurate and beautifully made Ghia 6.4L. The story of the Ghia is defined by passion for a design together with the determination to make it a reality. With this model, BoS captures the passion, and the shape, details, and accurate dimensions deliver realism to match.

The second-generation Ghia was designed by Virgil Exner as a sleek coupé with exceptionally clean lines.