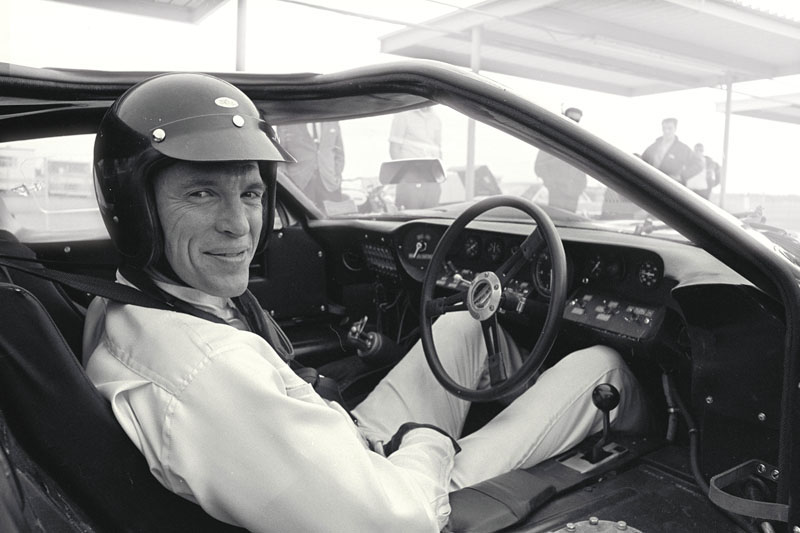 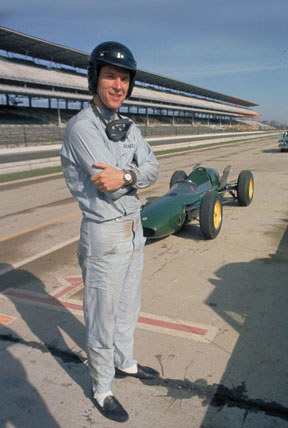 [Editor’s Note: This story was originally published in the Summer 2015 Issue of Die Cast X. With news of Dan’s passing on January 14, 2018 we updated and are reposting in fond remembrance of this Great American Racing Hero.]

Dan Gurney was born with great genes. At Oberlin College where his mother Roma Sexton and father Jack did their undergrad studies, they were known as the “Golden Couple”: smart, athletic, rich, talented and beautiful. His father went on to earn his MBA from Harvard, but instead of joining Dan’s grandfather at Gurney Bearing, the family business and predecessor to SKF Bearing, Jack went to Paris to take voice lessons and became the lead basso for New York’s Metropolitan Opera Company. He also sang for the Ziegfeld Follies. Jack was hugely successful, but after 15 years in the music business he’d had enough of the constant travel, so he retired to spend more time with his family. He purchased a commercial orchard in Riverside, California specializing in citrus and avocados.

Dan graduated from Manhasset High School on Long Island, then made the trek with his parents to the West Coast just as the post-WWII “Golden Age of Hot Rodding” was blooming in Southern California. Like most young men his age in So-Cal, he fell in love with cars, and even built a Ford flathead-powered race car that he drove to 138mph at the Bonneville Salt Flats. Dan went off to Menlo Junior College, a feeder school for Stanford University, but got snatched up by the US Army and did a tour in Korea. Returning to California after his service, he began racing a Triumph TR2 in West Coast amateur events in 1955. In 1957, Dan’s 2nd place drive in Frank Arciero’s fast but ill-handling Maserati/Ferrari/Mistral race car at the first Riverside Grand Prix so impressed US Ferrari importer Luigi Chinetti that he arranged a Ferrari factory ride for him at the 1958 24 Hours of Le Mans!

A factory Ferrari drive meant Dan was on his way, and Formula 1 soon found him. He drove for most of the prestigious F1 teams of the day: Brabham, BRM, Ferrari, and Porsche. Later, and most notably, he raced—and won—in his own Gurney Eagle. But F1 wasn’t his only focus; he also raced and won in NASCAR, Sports Cars, and Indy Cars. At his home track, Riverside International Raceway, he was almost unbeatable in anything he drove and many came to call Riverside “The Track That Gurney Built.” The handsome, likable Dan was so popular with the fans that Car and Driver Magazine actively promoted him as a candidate for President of the United States until they found out he was too young to run for the office.

In 1964, Gurney, driving a Shelby Cobra Daytona Coupe no. 5 with co-driver Bob Bondurant, won first place in the GT (over 3 liters) class and fourth place overall behind three prototype Ferraris. Made by Exoto.

The 1962 804 was the only winner for Porsche as a Formula 1 constructor. The 804 won the ‘62 French Grand Prix at Reims with Dan Gurney driving the no.30 (shown from AUTOart.) Powered by a flat-eight air-cooled engine, this was the car’s only win in the 1962 championship season, although Gurney won another non-points race in Stuttgart. At the end of the season, Porsche shut down their Formula 1 program.

During his 15 year driving career Gurney won 7 Formula One races, 7 Indy Car races, 5 NASCAR races and placed 2nd twice at the Indianapolis 500. He was also competing and winning in the Sports Car World Championship, Can Am and Trans Am. Possibly the greatest compliment he ever received came from the father of Jim Clark—at his son’s funeral. He told Gurney that he was the one driver his son truly respected.

Over his 60 year career in motorsports, he was an innovator and trailblazer that deserves recognition for many diverse racing firsts: He was the first American to design, build and win in his own F1 car. He was the first F1 and Indy Car racer to wear a full-face helmet. He was the first race winner to spray champagne from the podium. He worked actively to bring rear-engined cars to the Indy 500, helping to elevate both safety and performance. He was a leader in creating CART to replace USAC as the sanctioning body for Indy Car racing. His “Gurney Flap,” also known as a “wickerbill,” dramatically advanced the science of race car aerodynamics, and is used worldwide in automotive and aviation applications.

After being a dutiful Ford employee for the 1966 Le Mans and playing “hare” to get the Ferraris to chase him and use up their cars, Gurney and teammate Foyt were “allowed” to win the 1967 24 hour race in their GT40 Mk IV no. 1 (Exoto 1:18 shown). The relaxed Gurney and the mercurial Foyt were an unusual pairing, but they made the best of it and brought Ford their second Le Mans win in two years.

Dan’s company, All American Racers, has won 8 championships and 78 races with their in-house-designed Eagle race cars, including the Indy 500, the 12 Hours of Sebring and the 24 Hours of Daytona. Although he turned over day-to-day operations of AAR to his son, Justin, he played an active role in the company right up until his passing. His driving talent and technical innovation across numerous series and disciplines thoroughly qualify him as racing’s Renaissance Man, so let’s look at some of his most notable machines replicated in scale.

One of the most beautiful Formula 1 racecars ever designed, the aluminum, magnesium and titanium Eagle with its nose designed by Dan, his dad, Jack and Len Terry to represent the eagle’s beak, won two races during the 1967 racing season, the Belgian GP at Spa and the non-point Race of Champions at Brand Hatch. This is the no. 36 Spa winner by Carousel1. 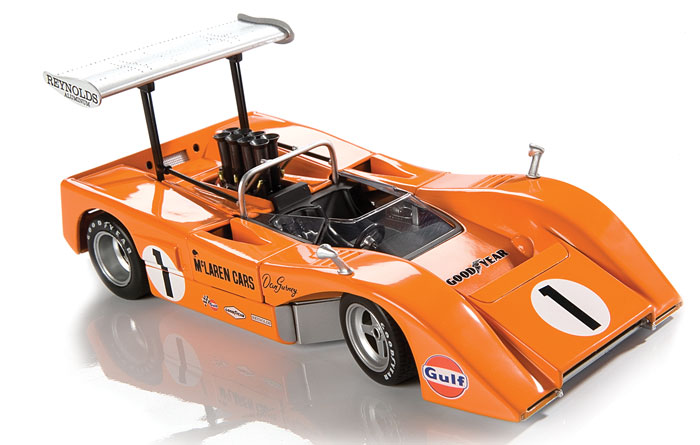