We’ve been spending a lot of time lately on the web and Facebook checking out the brilliant custom work being done by some genuine artists in the world of diecast. One who’s work we’ve admired many times is Damon Paterson. His work covers several genres, but he tends to gravitate toward American muscle cars and classics with many of his builds. When he finished his 1:18 replica of the Super ‘Cuda built by Legendary Motorcar Company we knew we had to show it off. If you want to see more pix of the original here’s a link, but honestly its not really necessary — Damon’s replica is that good! But don’t take our word, check it out for yourself! And Damon shared a few details about the build when he sent us the pix, so check out the captions too. 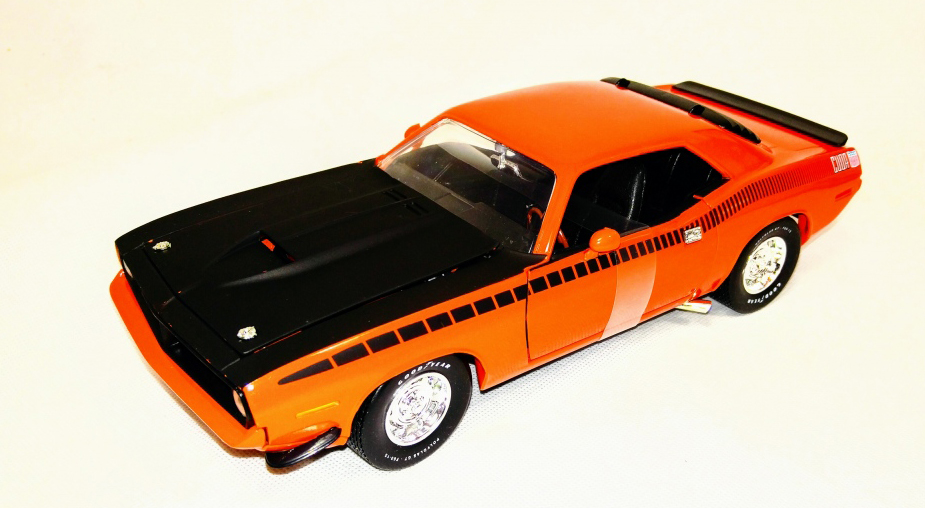 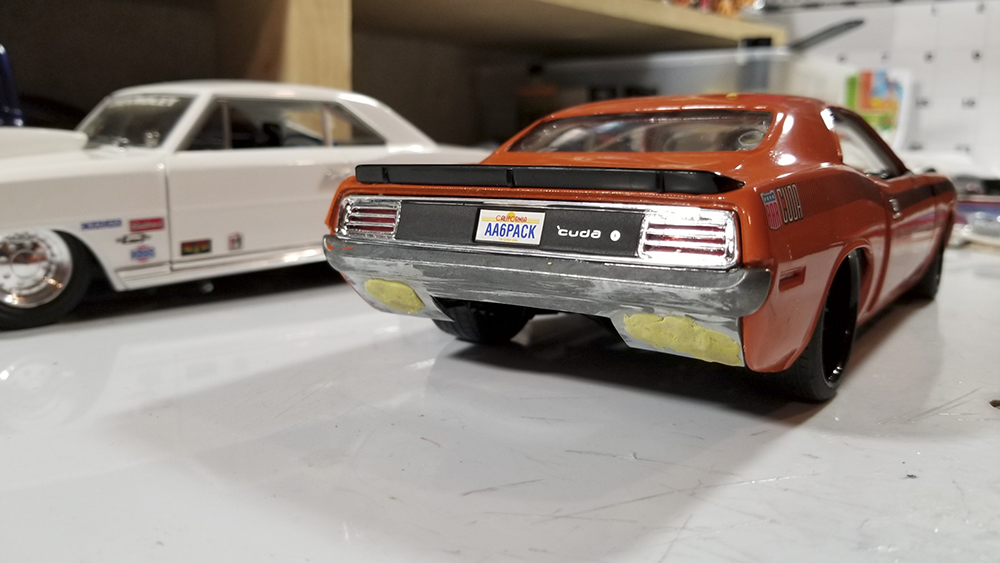 He immediately went to work of the lower valences. It looks like Ertl’s notoriously thick lower overhangs actually helped a little in this case! 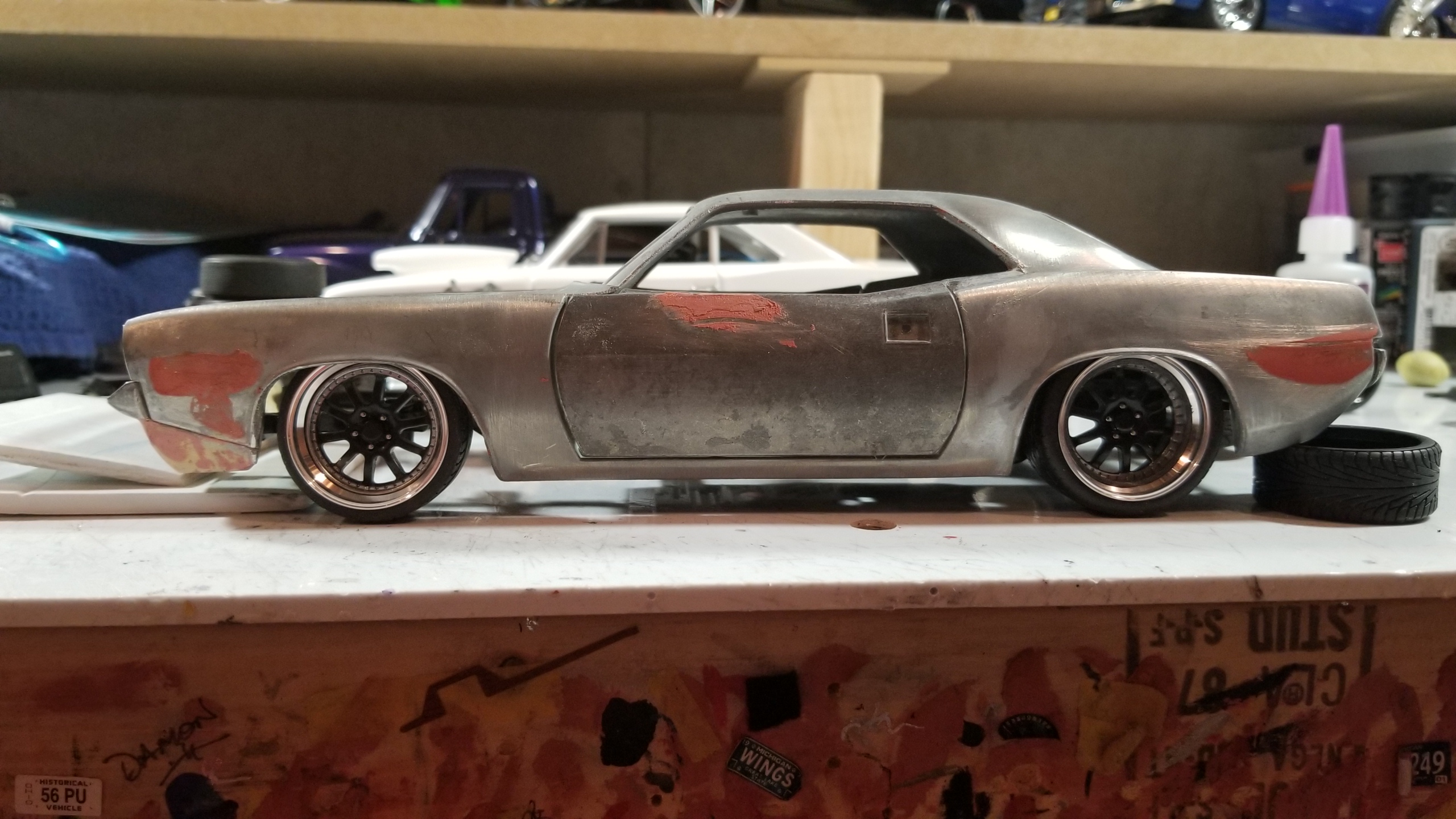 After he stripped off all that K2 Orange, he test-fit his custom wheels to get the stance right. 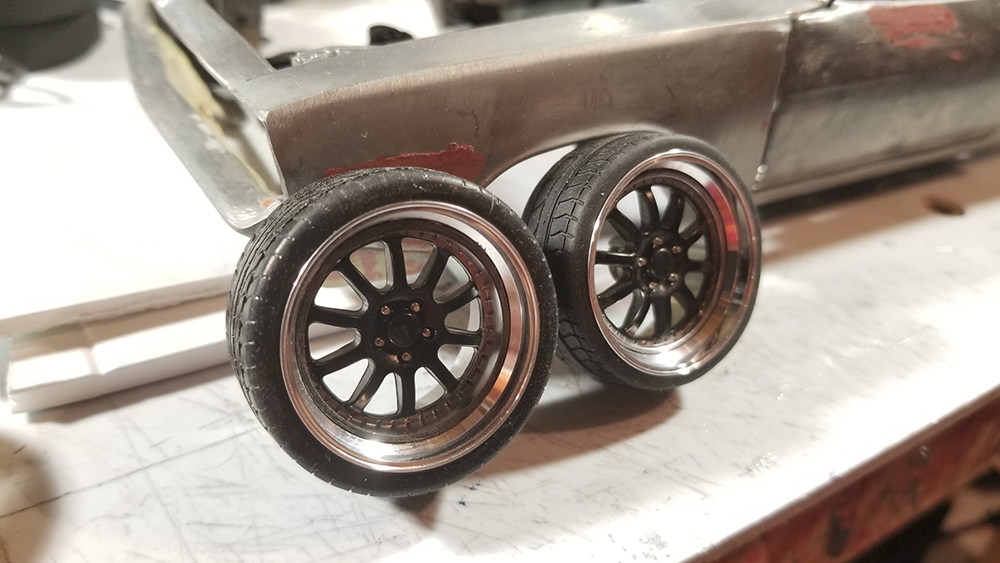 You might guess that the wheels were off-the-shelf pieces, but you’d be wrong. Damon borrowed the centers out of GMP’s Kinesis wheels, but he added his own rims out of genuine aluminum to get the right diameter and lip. 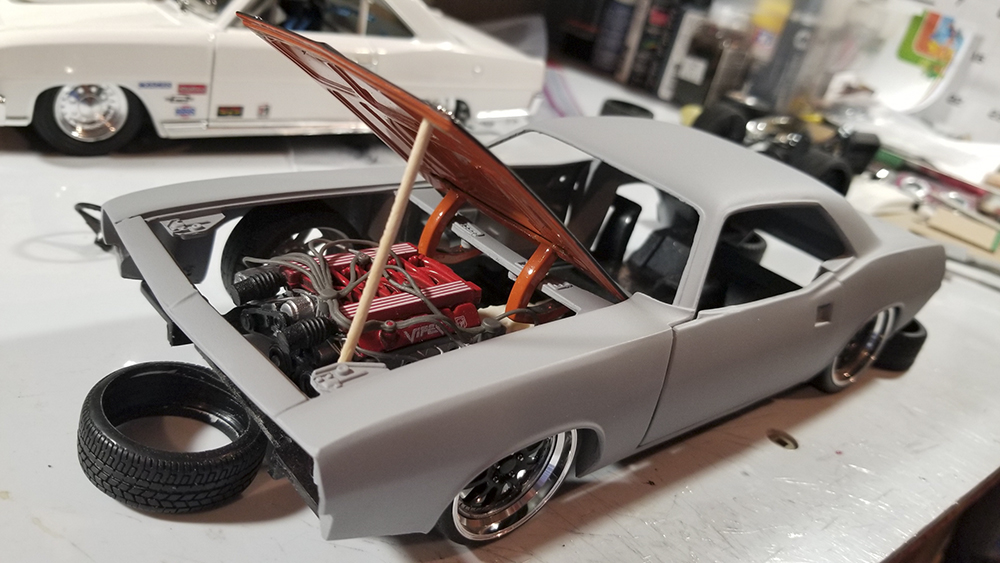 After primer there was more test-fitting — this time to get the placement of the Viper-sourced V-10 correct. The motor he used was the 8.0L from a Maisto’s 2nd-generation Viper. This is one slight departure from the full-size Super ‘Cuda, which used a 3rd-gen 8.3L V-10, but scale donor motors of that are pretty hard to come by! 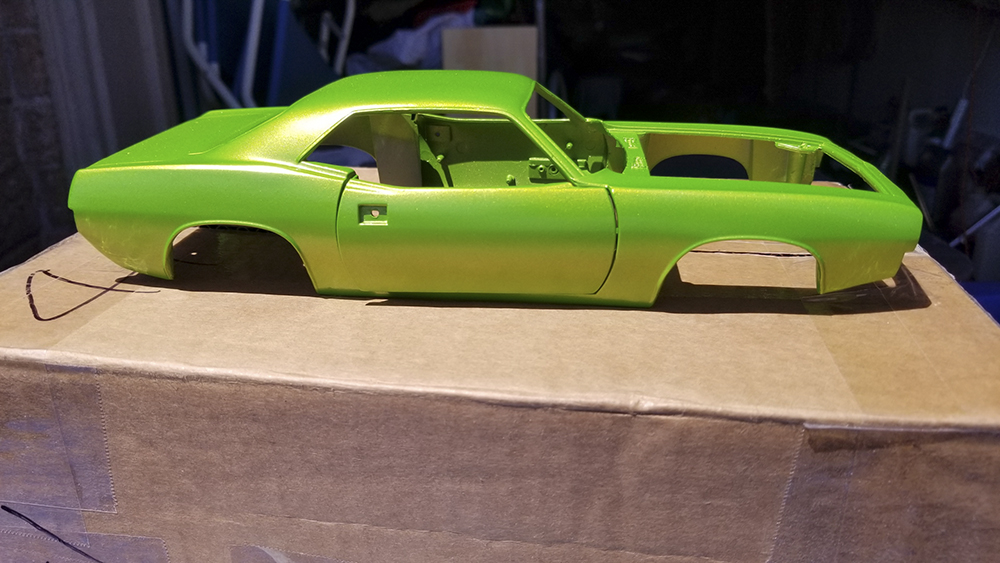 Damon then sprayed the new color — the aptly-named Sub Lime! 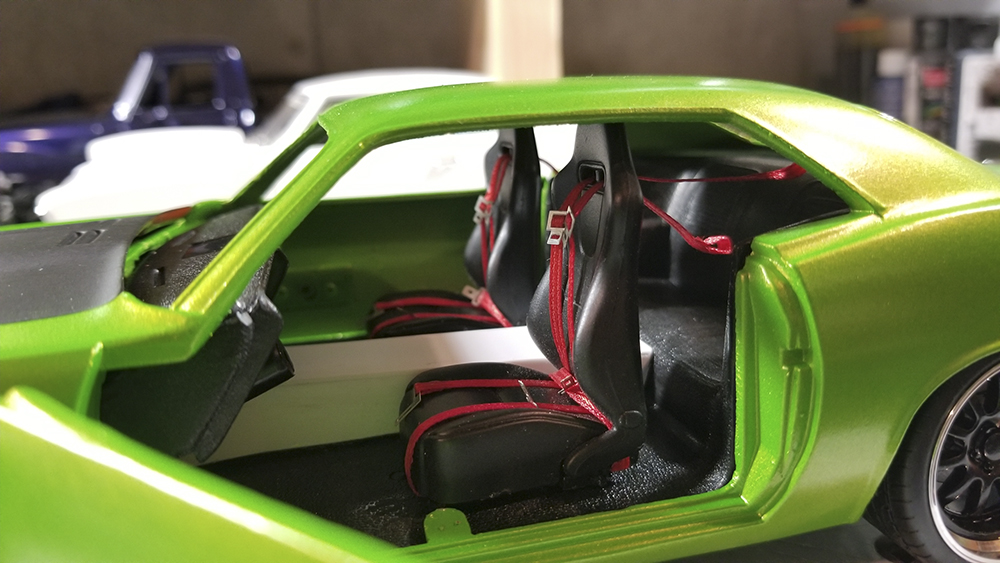 When it came to the interior Damon went to the web for resin-cast seats and steering wheel. Nobody made the console though, so he had to scratch-build that (and also the roll cage) out of styrene. 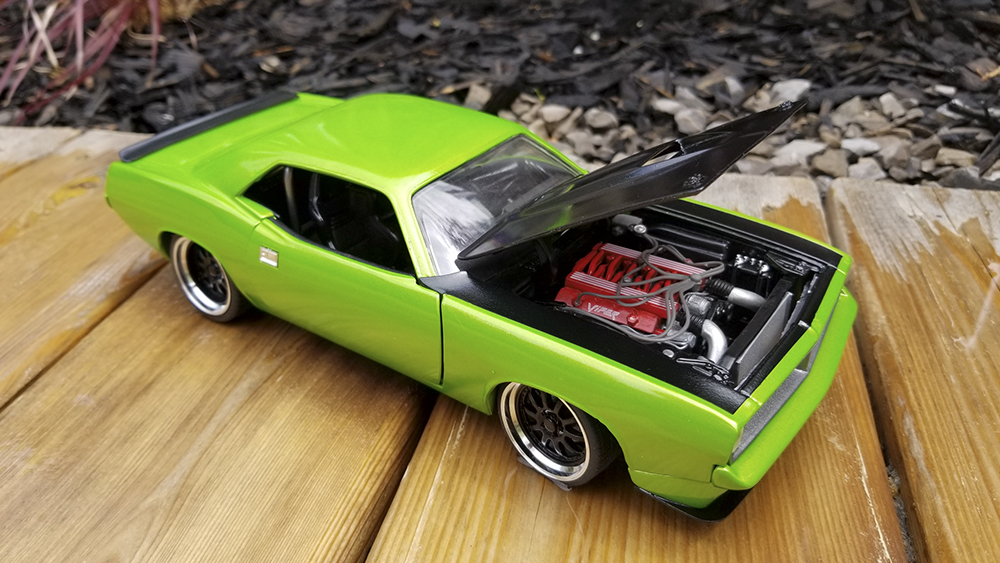 More styrene to craft a custom intake to funnel fresh air into the V-10 from the scratch-built valence inlets. The radiator was poached from an Ertl Corvette. 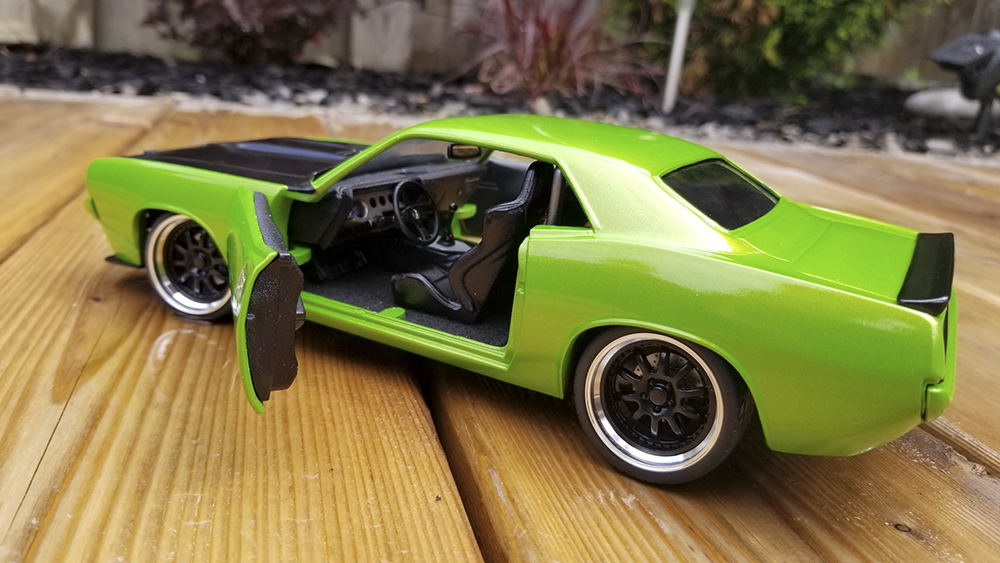 Want to know what a stickler for detail Damon is? He didn’t want the holes in his rear glass from the the AAR Cuda’s louvers, so he dug up a ’71 Ertl Cuda window insert to eliminate them! 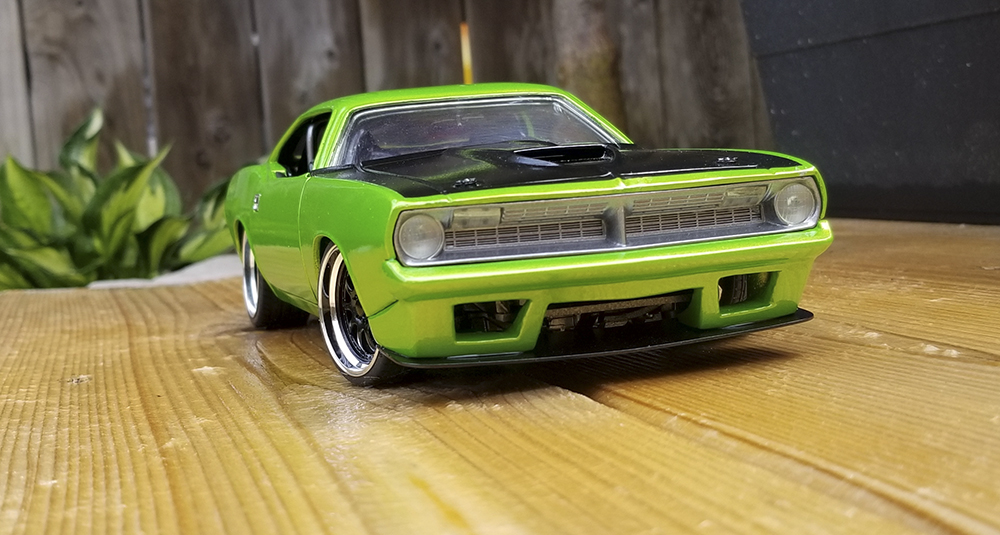 That front valence and diffuser are scratch-built too, and they nail the look of the original. 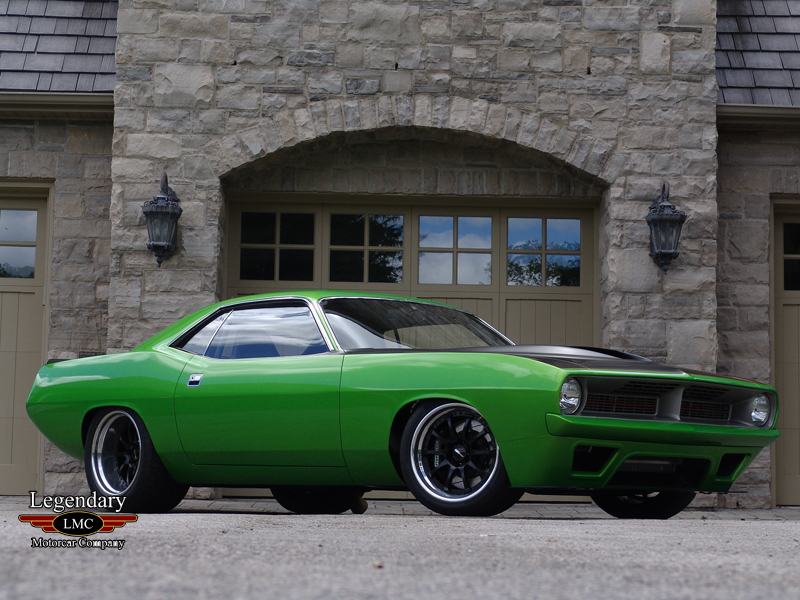 Here’s a look at LMC’s original for comparison.