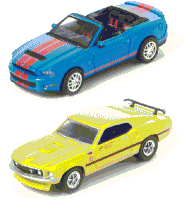 Just because a car magazine was issued in the 21st century doesn’t mean that the machine on the cover wasn’t a historic, high-octane legend from years past. GreenLight Collectibles’ ‘Zine Machines Series 2 features a plethora of cars from the ’60s and ’70s that your dad and his pals (and probably his little sonny boy) drooled over. It’s not all oldies; ‘Zine Machines also pays respect to the newer muscle cars roaming the streets today – like the 2010 Shelby GT500 featured on the cover of Motor Trend (March 2009), making an appearance in a blaze of Grabber Blue with Torch Red racing stripes.