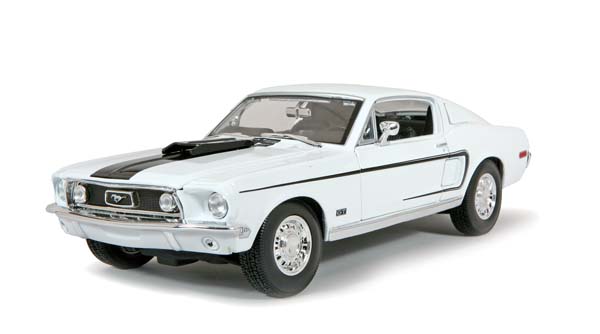 In 1968, Ford’s secret weapon, the 335hp 428 Cobra Jet big-block, made its debut in the Mustang, thanks to Bob Tasca. Ford, of course, made more of the cars, and the result was one of Dearborn’s most iconic factory race pack- ages. Maisto’s “Wimbledon White” example is proportionally accurate and features opening doors, hood, and trunk; the exterior graphics are correct, with the only nits being chromed marker lights (they should be clear) and overly shiny wheels. Not a deal breaker, at this price. The interior is comprised of plastic molded panels throughout, with a well detailed and accurate dash and readable gauges. Beneath the ram air hood, a well plumbed and wired 428 Cobra Jet engine rests, complete with original catch can and a fan shroud warning label. The working suspension and functional steering are very nice features at this price point, too. Overall, a slick example of pre-SVT Ford his- tory in an affordable package. – Andy Goodman maisto.com