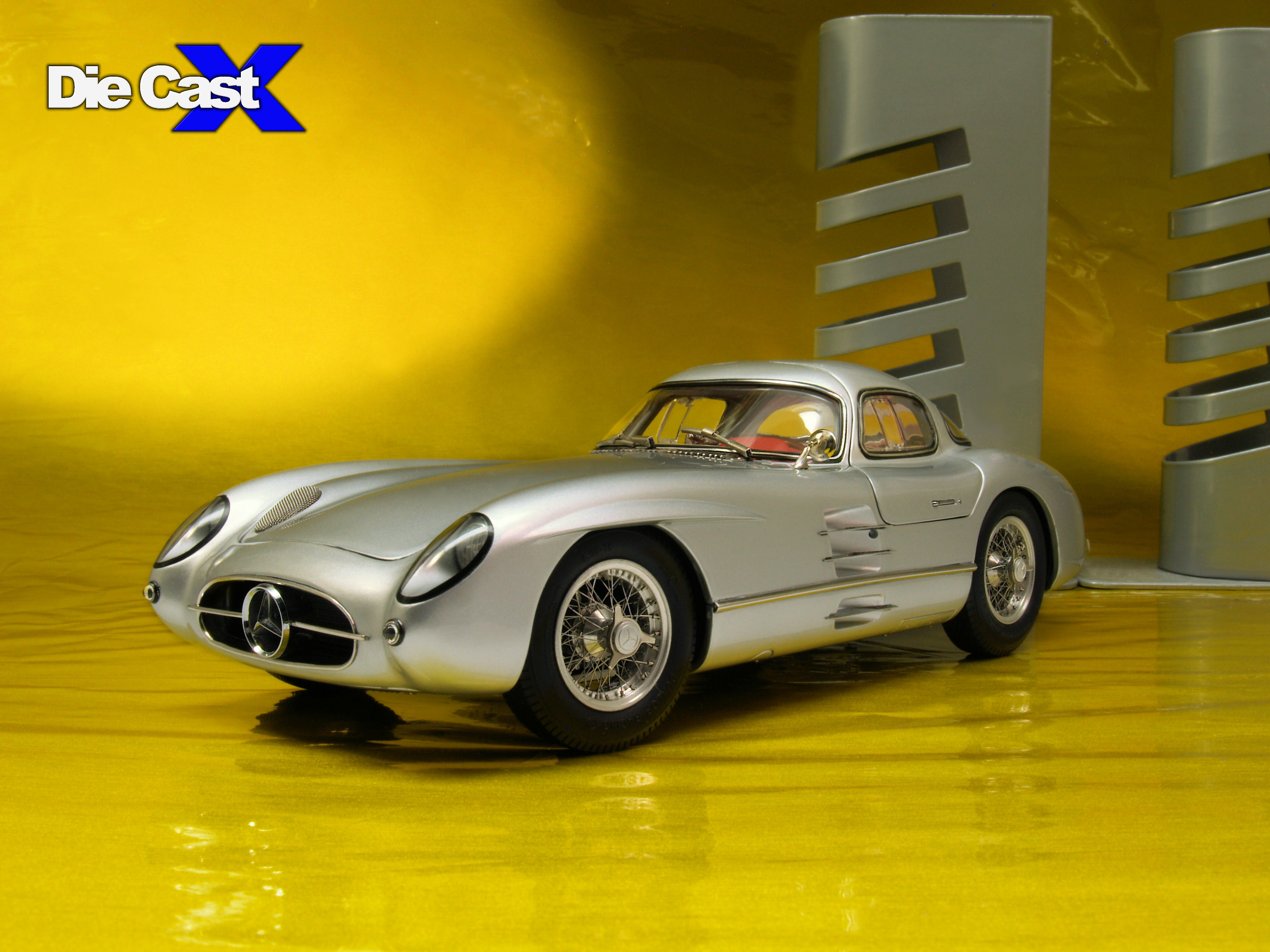 “Desmodromic” sounds like some sort of ‘fifties-era sci-fi rocket propulsion; the kind of thing a Brylcreemed Hollywood astronaut in a silver suit would mention as he flipped a switch. Replace the celluloid spaceman with a flesh and blood race car driver of the same vintage, however, and the whole thing rings true: Desmodromic actuation – where the engine’s cams open and close intake and exhaust valves directly, without spring tension – was what Mercedes-Benz engineers used to clap the clappers on the straight-eight motors they planted into the famed 300SLR racers.

The sci-fi stuff didn’t stop at the valve train. Like the fabled W196 racers that came before them, these streamlined beauties were hotbeds of cutting edge car crafting, using alloys and materials that bent the periodic table in directions that few had ever before imagined. In race trim, their bodies were made of “elektron” – a specially potted, lightweight blend of magnesium, zirconium, and aluminum. They also had inboard-mounted brakes; these binders were attached to the front wheels with half shafts and were aided on the track by air dams that rose from the rear bodywork when called upon. In an effort to keep weight down, the engine blocks weren’t cast, but were formed from sheets of silumin – another stratospheric-for-the-time alloy. The finished pieces were fitted with direct injection, fuel delivery technology that’s only recently been incorporated into production road cars.

The high-tech approach paid off. In races ranging from the Targa Florio to Le Mans, the cars were virtually unbeatable. Rudolf “Rudi” Uhlenhaut was the man behind much of that success. He’d been the head of Mercedes racing since the late 1930s, and had done some driving in his early years. This, and a background in engineering, gave Uhlenhaut the insight to go beyond nuts and bolts and reach into the soul of a machine. With fellow designers and engineers Max Sailer, Albert Heess, and Max Wagner in his crew, Rudi’s racers made up a virtual parade of competition-dominating machines.

So, one fine day, Mercedes-Benz gave him a car. No, not a family sedan, or even a sweet little cabrio. For his service, the 49 year old Rudi was given an SLR of his own – chassis 0007/55, fitted with a hand-hammered, gullwing-door coupe body designed by Karl Wilfert. An almost identical body was affixed to chassis 0008/55; because that second car hardly ever turned a wheel on the road, and Uhlenhaut’s copy was actually driven in public, both Rudi’s ride and its lesser-seen doppelganger would become known as “Uhlenhaut Coupes”.

These were seriously fast machines, very probably the fastest road-going cars of their day. Both had originally been slated to compete; chassis number 7 had been seen practicing for the Swedish GP and the Targa Florio, while number 8 was on deck for the Carrera Panamericana. Those plans were halted when an SLR piloted by Pierre Levegh disintegrated at Le Mans in 1955, killing its driver and more than 80 spectators. Mercedes, in the shadow of that tragedy, withdrew from competition at the end of the season.

With the pressure of competition off his shoulders, Rudi enjoyed the car to an extreme level, and was often seen working out his middle-aged crazies by bombing around in the coupe at extreme speed. Legend has it that Uhlenhaut once made the run from Stuttgart to Munich – a two and a half hour drive at normal velocity – in just over an hour. Given the lax speed limit on the Autobahn (and the car’s mechanical and engineering magnificence, no doubt kept on point by the team of Mercedes mechanics who tended to it), that’s not a hard story to believe.

Much like the real coupe, the CMC replica of number 0008/55 – the partner to  Uhlenhaut’s actual road car – is a direct descendant, and therefore major parts recipient, of the equally outstanding models of the 300SLR these fellows offered up just a short time ago. And like those cars, this one’s a jamboree of gee whiz features, solid build, and a uniquely German sense of showing off its materials and build hardware.

On first blush, that may grate on purists, who will see the unpainted steel spokes and rims on the wheels as an affront to history. But to most collectors, this one included, this is the kind of stuff that makes for an engaging first impression. The quality and precision of the thing keeps that glow going; while not pin straight, the shut lines on the diecast body are well joined, and speak more to a careful hand build than a precise machine assembly. The body itself is painted in a tight metallic blazing with wee metal flakes; look at this car in any multiple-point light source and it puts on a terrific show.

The doors, hood, and trunk all open on realistic hinges, and each has a prop or a set of jointed struts to keep it aloft while you check out the goods. There’s a lot to see and do, depending on your level of dexterity – and willingness to explore. Example given: Under the trunk is a brace of beautiful spoked wheels. These are fastened in place by tiny central nuts. Spin these off, and you can pull the spares out in the same manner as on the 1:1, by guiding them up at an angle over the frame that supports them. Putting them back may be more of a challenge – but it’s a kick that someone’s taken things this far for the few who will make the journey.

More readily experienced are the under hood and cabin details. The 3.0 liter, 310 horsepower engine is sloped to the right at an angle of 33 degrees, as in life, and here it’s an uncompromising show of rubber clamps, metal castings, stainless plumbing, and flawlessly applied textures and surfaces. It goes really deep and wall to wall, with all of the frame tubing and structure festooned with pipes, clamps, and accessories. Amidst all of this, my favorite detail is the positively elfin ID tag riveted to the cam cover; my second favorite is the cam cover itself, which wears a real world part number in its casting. Should you ever need a replacement unit for your 1:1 SLR, let me save you a trip past the tennis courts, stables, and pool house: It’s 1900510503. Glad to help.

While you’re poking around with the magnifier, take a look under the doors, past the sills, and into the cabin. Beneath the stare of a gorgeous silver metal dash and well-stocked instrument cluster, real leather has been dyed a brilliant red and carefully formed over the seat frames, sills, and binnacle. I don’t know exactly what kind of critter these hides were lifted from, but they’re amazingly supple and form-fitting. So is the tartan plaid at the seat centers. Minikin steel fasteners are used to secure the door panels, rear carpet, and the door strikes. This is incredible work, and it’s well appreciated.

You can pull the wheels by unscrewing the knockoffs at the lathe-turned wheel hubs. While you’re at it, check out the individual spoke adjusting nuts at the rim, and the cast-in lettering on the rubber tires. It’s all there, from the 6.50 x 16 size, to the Dunlop Racing logo, to  – I kid you not – the original’s licensing and trademark info on the sidewall, in letters scarcely large enough to reflect light.

Chassis detail is limited, due to the streamlined lower pan, but a second glance is rewarded with some neat notes, like the drain tube for the oil vent, the brass radiator drain plug, and the scoops cut into the pan to vent the engine compartment and the transaxle, which pokes through a cutout of its own, alongside the lower control arms. Assembly screws begged to be loosened – prior CMC Mercedes models are splittable along their sills, to reveal a full frame – but common sense kept me from taking the trip on this late pre-production sample without a factory rep on hand.

Truthfully, there was no need to push things. This is an incredible piece. It’s been suggested on more than one occasion that CMC could make a model of a ride-on lawn mower, and most collectors would elbow each other aside to procure a copy in every color. I have to agree. With high parts counts, noble materials behind every nook, and the undeniable hand-built element, this maker’s products tug at the heart strings. Match that almost magnetic pull to a subject as wondrous as this one, and you have a piece that can enchant for years. Well worth the price.