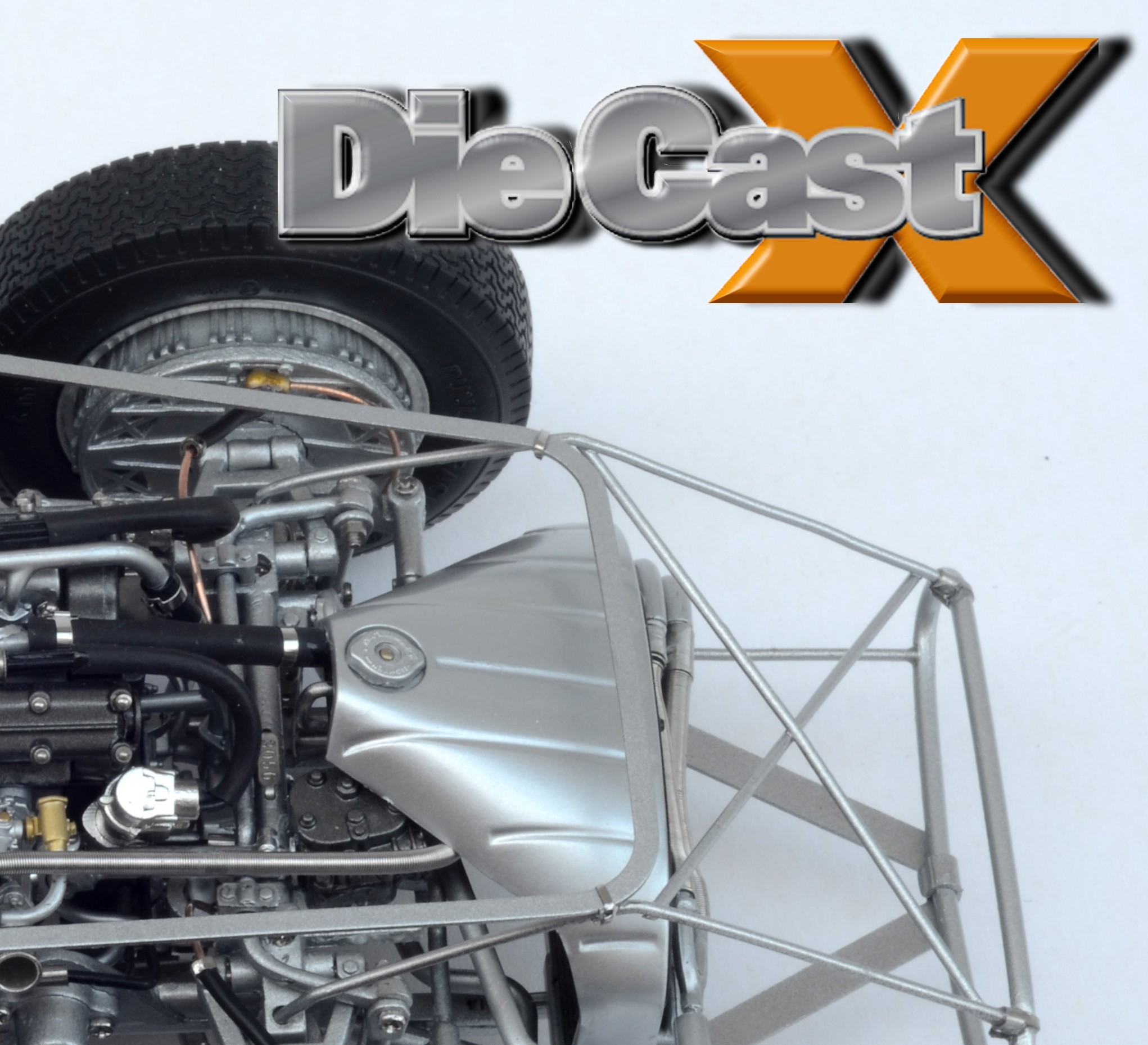 CMC has given collectors two amazing versions of the 1955-1958 Maserati 300S draped in beautiful Carozzeria Fantuzzi bodywork, but the most impressive version of the 300S just might be this rolling chassis version, on deck for release sans body.

It’s an important car, and this release of a nuts-and-bolts (and tubing, and rubber, and…) chassis is the icing on a very quick cake. In 1954, Maserati basically re-configured their highly successful 250F Formula 1 monoposto into a two-seater sports car to contest the FIA’s World Sportscar Championship for ’55. Since the car would be racing on bumpy post-war European road circuits, using pump gas and racing for up to 1000 km, this redesign had to be made more robust than the F1 car. The chassis was widened and strengthened, and the engine was opened up by a half-liter. The compression ratio was dropped to improve reliability, but yield the same horsepower as the 250F, and the whole thing got wrapped with an alloy body developed without the aid of a wind tunnel. Though done by eye, the intuitiveness of the design – which grew a longer nose as it evolved –  yielded a shape that was both aerodynamically slippery,  and extremely beautiful.

CMC’s complete 300S was reviewed in the Spring ’13 DCX, and we were crazy about it, even though we could only guess at the details hidden under its impressively rendered  skin. Now that the shell has been taken away, it’s apparent that our guesses were right: CMC ’s engineers build their models with details that go far beyond what’s visible with the body in place.

This isn’t a surprise. We saw this kind of completeness in an earlier Maserati from CMC – the “Birdcage”, which also got marketed as a skinless, plinth-mounted museum piece. In an evolutionary move, this 300S running frame takes that no-detail-left-unexplored philosophy a step further: CMC has deleted the body, but left its supporting trellis in place. That allows a minds-eye view, and rough idea of the final shape of the car.

Everywhere on this exquisite replica, details boggle the mind: tiny rivets are used to assemble the gas tank and hold pieces to the frame. Brass tubing runs from stem to stern, lashed to the rails with rubber and steel clamps. Even the hardware all over is staggeringly well done: where most manufacturers might use a dab of paint to represent a chrome acorn nut or a brass bolt, on this car, these are actually separately installed parts. The seats are covered in real leather, the instrument panel is fully wired and plumbed, and everything, everywhere, seems to be wrought out of metal. If there is a piece of plastic anywhere, they’ve cast, textured and installed it in the model so seamlessly, we don’t know where it is. All we see is alloys of every shape and variety: photo-etched, diecast, machined, or otherwise fabricated into minute pieces that are flawlessly fitted. Are there pistons in the engine? Oil in the DeDion rear? We’ll find a small wrench and get back to you.

Kidding aside, this is an amazing example of the modeler’s art, limited to 3000 pieces, and highly recommended.