When we visited Jada at the New York Toy Fair in February we got a sneak peek at a bunch of new stuff they have in the works for 2018. One of the best parts was walking through the Jada display and talking face to face with the guys who dream up these cars and then make them happen. Finding out what projects they’re personally most excited about is far more informative than any press release. As it turns out, the vibe behind one of our favorite new Jada cars— the classically influenced 1972 Datsun 240Z that was part of the first wave of JDM Tuners releases—is close to the hearts of the Jada design team too. JDM Tuners is where a lot of the company’s horsepower is going to be focused in 2018, and with the next round of releases they are bringing us a several more in the style of that Z, including a couple more Datsun/Nissan classics as well as a gorgeous ’67 Toyota 2000GT. Following the show we talked Jada into sending us tons of cool pics of the pre-production prototypes and even a couple resin hand samples that show the one of the main directions JDM Tuners is going in 2018.

After seeing the new cars, we reached out to Michael Jimenez, Jada’s Director of Vehicles and Creative Service—one of the guys we spent some time with in NY. His excitement for the JDM line was palpable when we met, so we asked what it is about JDM from a design perspective.

“The JDM Tuners line is a dream for the vehicle design team here at Jada. Many of us started driving around the time the import compact car scene started to blow up. Street racing was big; “Battle of the Imports” had just started, and modified Japanese import cars held celebrity status. To be working on a line of die cast vehicles based on this style of cars we grew up loving makes us really excited!”

We also asked him specifically about the expansion of historic and classic models in the JDM line moving forward, and his thoughts on a few of the new castings.

“One of my favorite castings in the line so far is the Toyota 2000GT. Internally, we debated if we should make it more custom, but the car is so beautiful as-is so we ultimately decided not to do too much to it.”

Michael’s insights are reinforced by the photos of the 2000GT, which is only at resin hand-sample stage—in both 1:24 and 1:32. 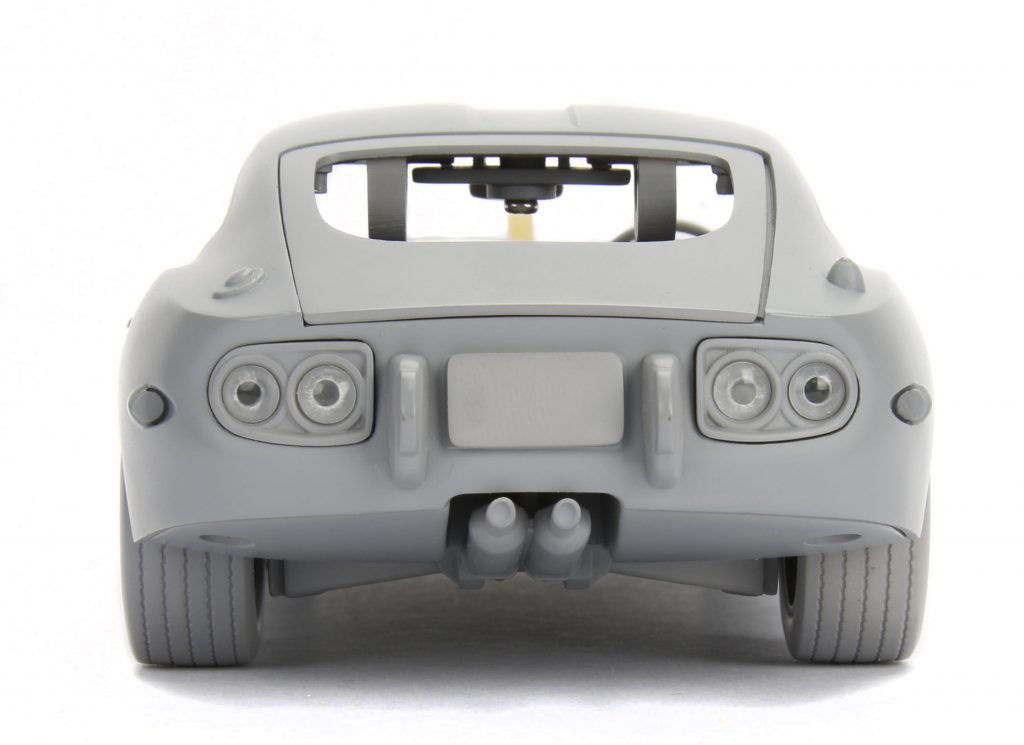 You can see even at this stage that the Toyota has undergone very little modification from stock. Looks like the doors, hood and rear deck will all open on the 1:24 version. 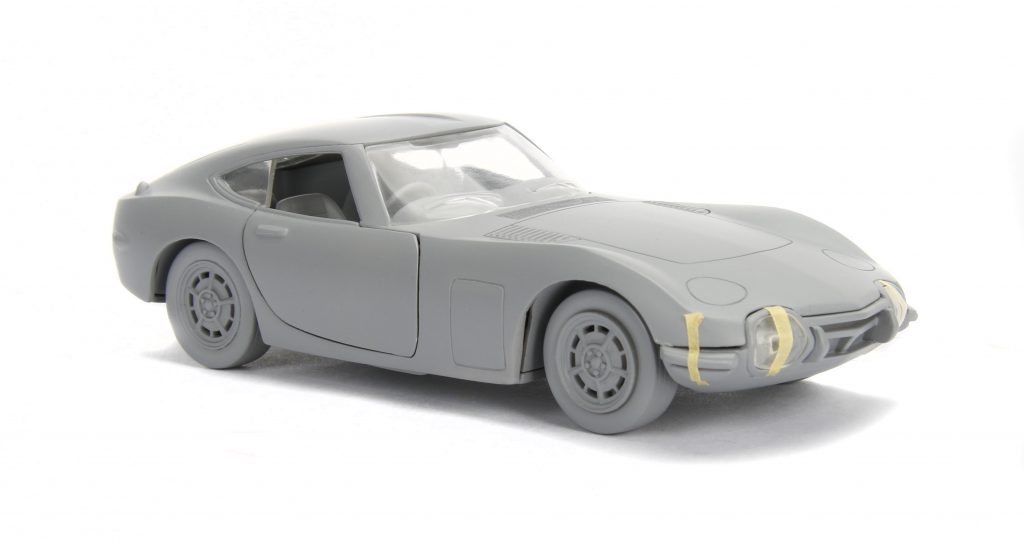 Here it is in 1:32—again very faithful to the original.

The Z from the first series is being joined by a brace of classic Nissan Skylines. Michael filled us in about them. “I’m sure you know that the 1971 Nissan Skyline 2000 GTR is in the Fast & Furious line. We wanted to also have that same casting in the JDM Tuners line but we wanted it to be a little different. What we decided to do is remove the front and rear bumpers, and add a front-mount oil cooler. This modified version was supposed to be strictly for JDM Tuners while the other was for F&F, but we liked them both so much we decided to use them both in the JDM line.” 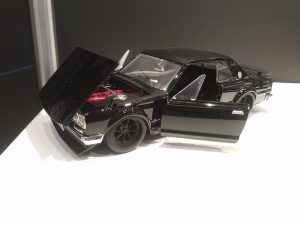 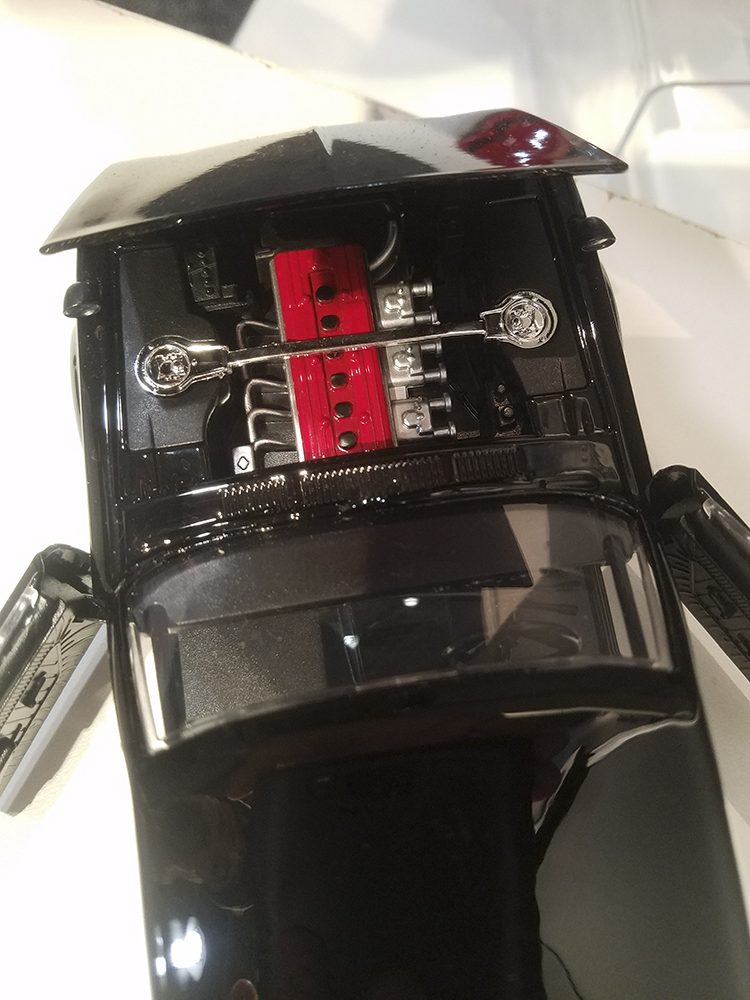 This 1:24 version was originally developed in black for the Fast & Furious line, which we spied in New York. 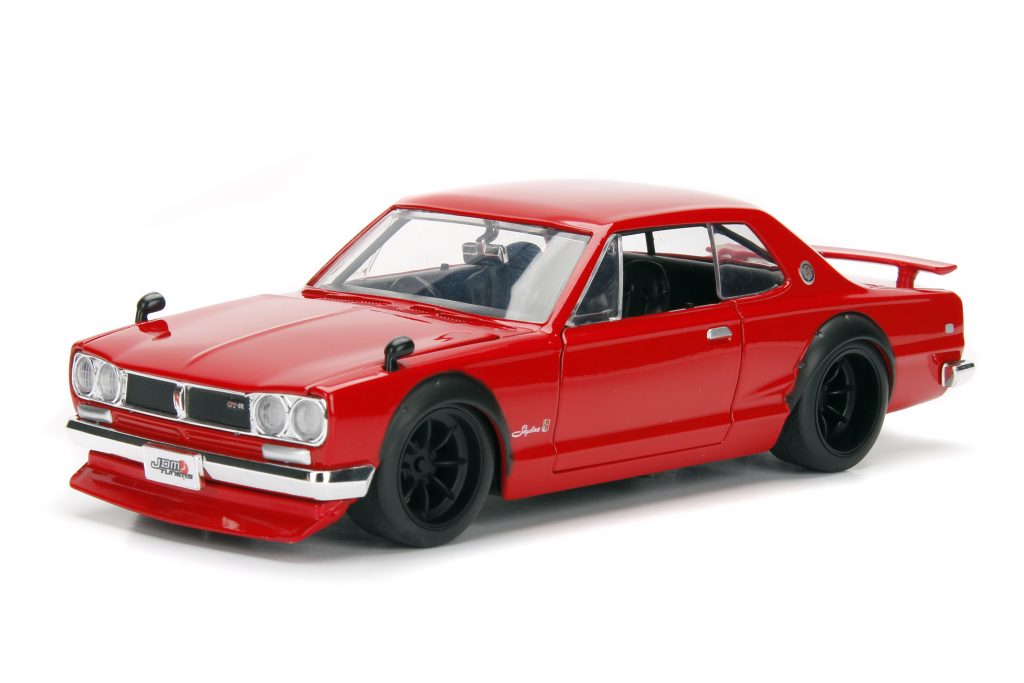 Jada subsequently adapted two different versions of the ’71 Skyline for the JDM series—one that’s identical to the F&F one except for the red color (above), and some more race-themed ones. 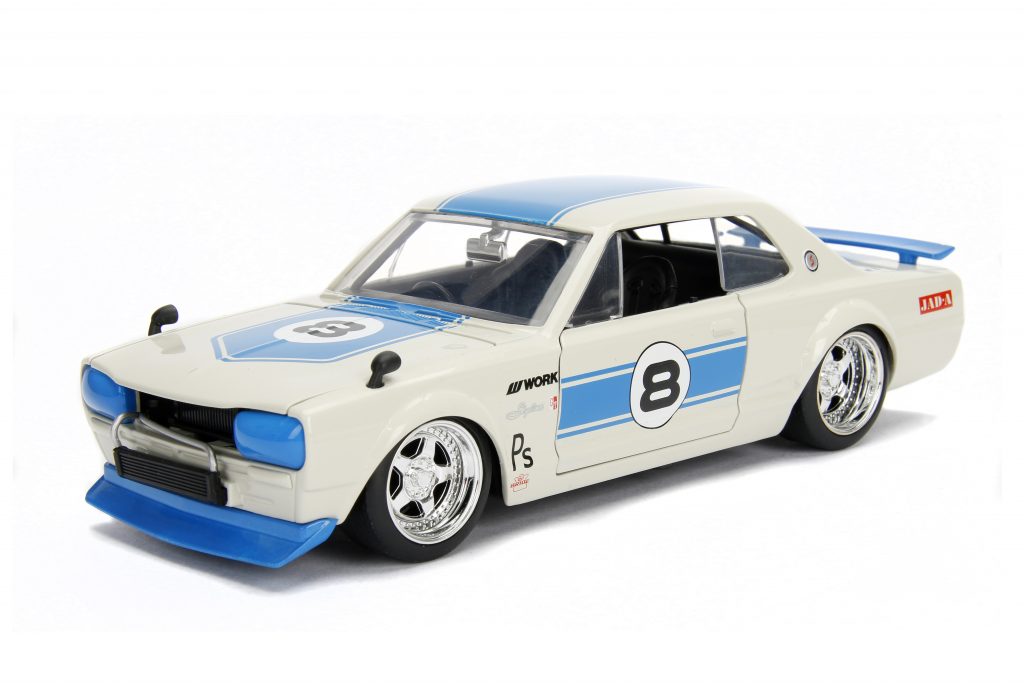 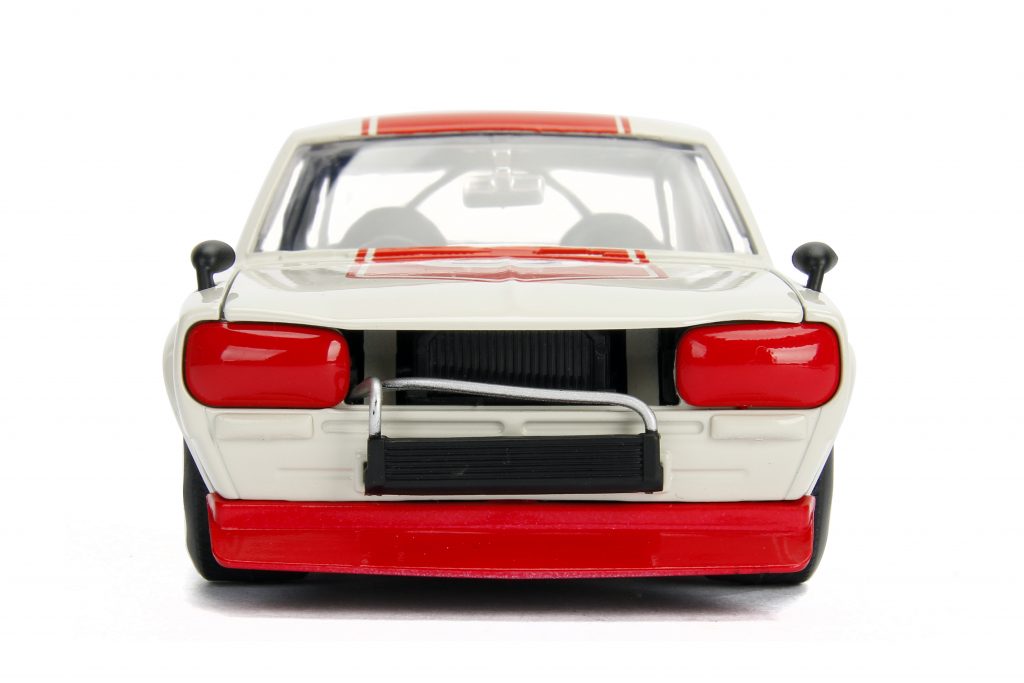 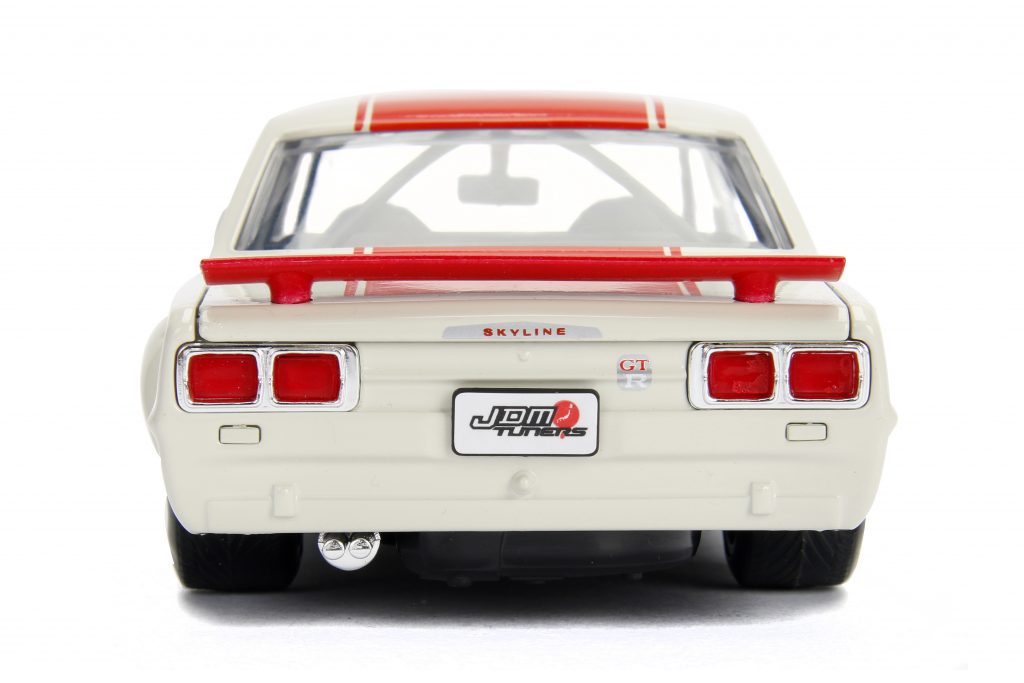 The JDM-exclusive versions have a front-mount oil cooler, bumpers removed, and race-inspired livery. There will be 1:32 versions as well. 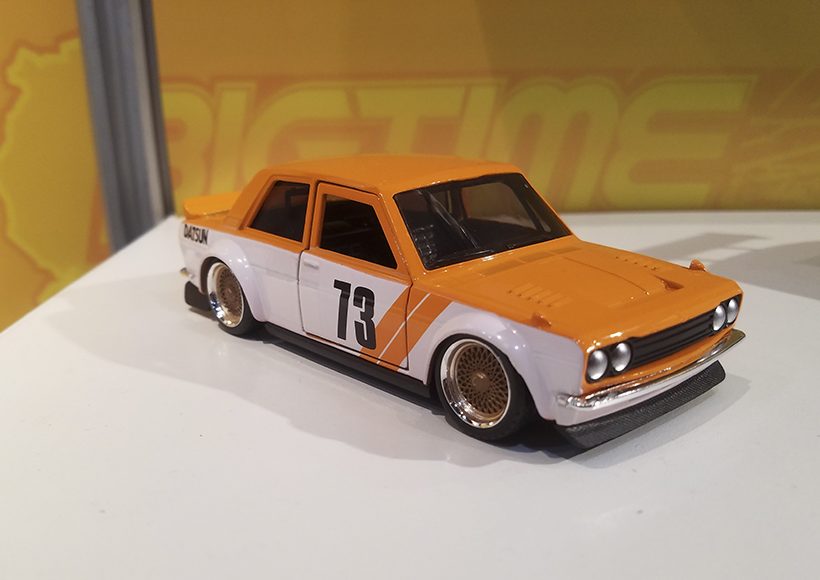 Speaking of 1:32, this racy little Datsun (Nissan) 510 will be part of the mix. The one we saw in New York wore classic road-racing inspired livery, but the casting was still undergoing final tweaks. 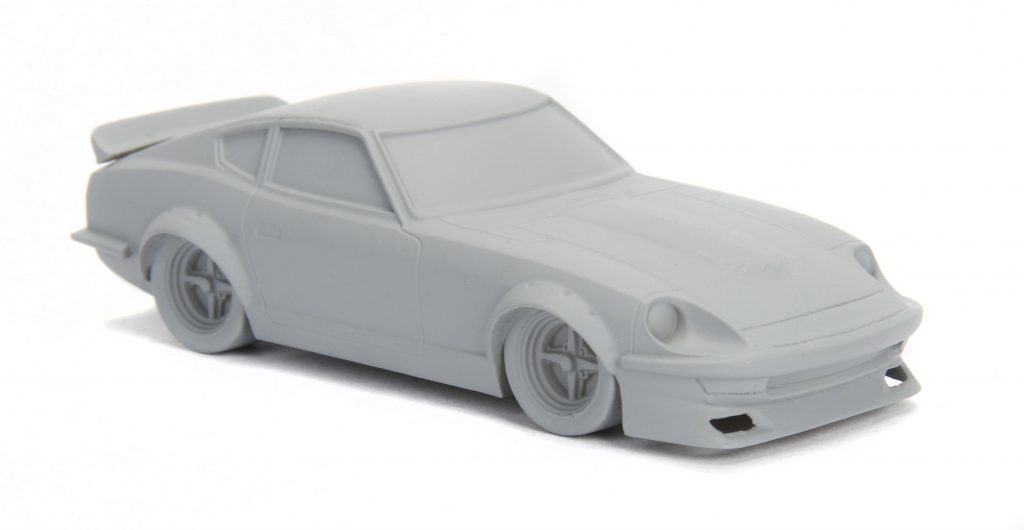 There are also modern castings in the next wave, but even some of them have a bit of retro flavor, Michael says. “When it comes to livery, my favorite deco is the 1/64 flat black with gold pin stripes. This is our way of paying homage to one of the most iconic Kenmeri Skyline racing graphics.” 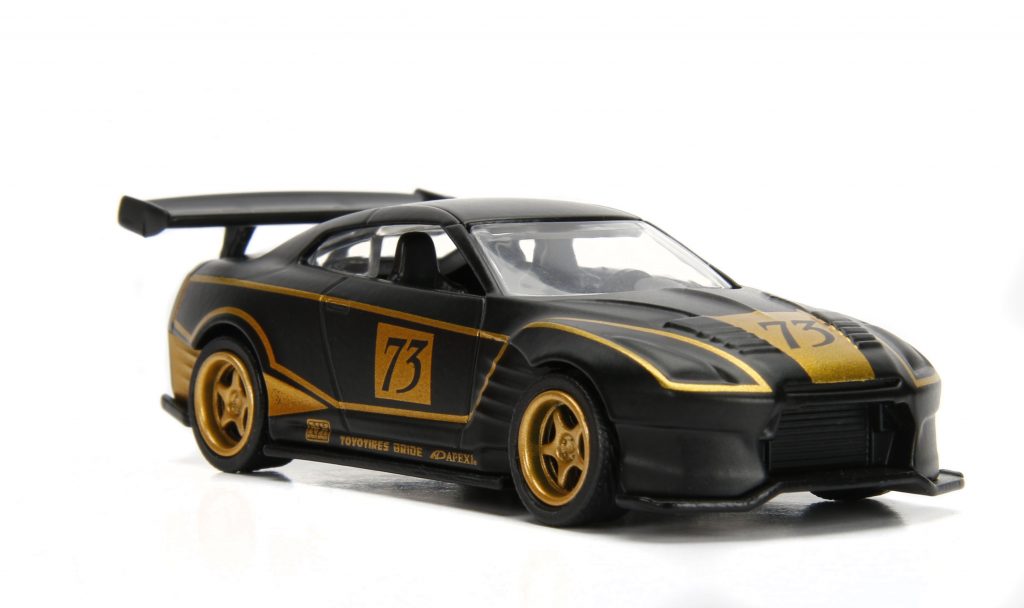 There are a bunch more castings coming for the JDM Tuners line in 2018, including plenty of modern stuff. But we really like how the classic cars are becoming a regular part of the mix, and look forward to what Michael and the rest of the Jada design crew come up with down the road!