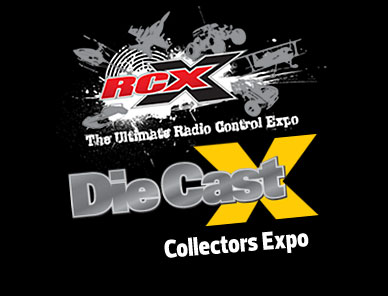 The lines stretched as far as one could see outside of the Long Beach Convention and Entertainment Center as hundreds of radio control and diecast enthusiasts waited their turn to enter Air Age Media’s 10th annual RCX show.  Filling the Convention Center, this year’s event was the most interactive to date, offering both the experienced and the newly curious countless opportunities to try everything these hobbies have to offer. Vendors were plentiful, selling everything from ready to run remote control kits to diecast collectibles to slot car tracks – and never before seen deals were to be had all weekend long as consumers were leaving the show with their hands full of goodies.
Mid-day Saturday became a “who’s who”, as celebrities were seen at RCX all weekend long. Jarrod and Brandi from Storage Wars, Jimmy Shine from Car Warriors, Mad Mike from Pimp My Ride, Catherine Bach – Miss Daisy Duke herself, George Barris of Barris Kustoms, and NHRA driver Shirley Muldowney were just a few of the countless notables found signing autographs and walking around RCX, greeting fans and testing their skills behind many of the interactive activities.
If you missed 2012’s RCX/DCX, you missed one outrageous event – but never fear, we’ve got great coverage, and even more spectacle on deck for 2013. ‘Til then, check out these photos!
[nggallery id=156]