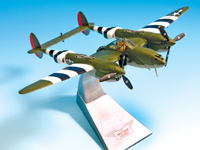 The Lockheed P-38 Lightning is one of the most unique and recognizable aircraft of aviations most memorable eraWW II. The twin-engine, twin-tail fighter was bred for speed and endurance, and it was the first aircraft in the US arsenal to exceed 400mph and packed huge wallop from its cluster of nose-mounted cannon. The dramatic styling of the P-38 begs to be showcased in diecast, and Corgi answers the need with this 1:72 version from its Aviation Archive series. Like all models from the series, this one depicts a specific aircraft from an historical unit and erain this case, the XYZ. Paint and markings on the model’s surface look phenomenal, and unconventionally beautiful lines of this plane draw the eye over and over. Landing gear is provided, but the plane looks best on the included matte silver display base.