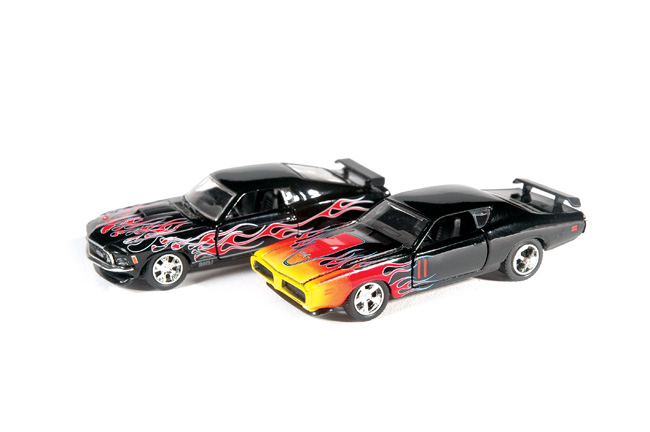 Nothing looks as sweet on the street as a black and flamed muscle car or truck. It is as vivid as a car gets, especially under the cruise-night lights. The 14th release of Castline’s M2 Machines Detroit Muscle shows off six flexed beauties in black with fire-breathing attitude. The ’70 Ford Mustang Mach 1 rumbles a 428 Cobra Jet engine with hollow point five-star wheels and cool big and small tires. The rival ’70 Chevy Chevelle SS 396 looks like it shared the same custom painter. The black ’69 Goat has cool Budnick-style billet wheels, a hood-mounted tach and a rear deck spoiler stolen for the Judge. The ’71 Dodge Hemi Charger is as badass as a diecast comes in bright candy flames and the imposing valve covers under the hood. There is also a ’69 Dodge Daytona Charger and ’71 ’Cuda 440. All six feature opening hoods, detailed engines and opening doors with full interiors. Each has a Pro Street stance with narrowed rear ends and staggered tire and wheel setups.