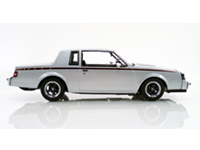 GMP’s Street Fighter series is all about taking models of high-profile muscle machines and augmenting them with selective aftermarket parts to simulate what the modern street/strip warrior would do to his car. The latest in the series is this 1:18 ’87 Buick Grand National. While previous efforts have struck a balance between street style and strip performance, this GN is pretty single-minded in its pursuit of speed. The little 3.8L V-6 breathes through an open exhaust that exits right off of its hotrodder’s hairdryer. That would be awful loud for extended street driving, but for quartermile sprints it would soundand runjust fine. Also present is a redesigned intercooler and intake, and a half-cage in the driver’s compartment. A beefed up fuel system delivers the goods to the little engine that could, and stylish 5-spoke wheels put the power to the pavement. Who says you need a V-8 to kick butt on the street?