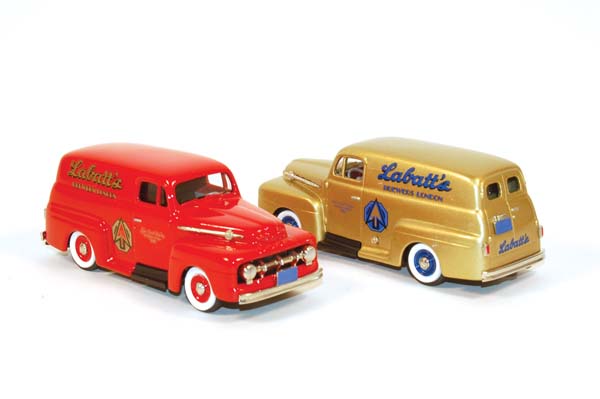 In a very rare move, Brooklin has released limited numbers (40 each in red and gold) of “Code 2” authorized conversions, done by someone outside the factory, of their 1952 Ford F1 8-Door Panel Van. These models have new paint and carefully applied “Labatt’s” decal logos and lettering. In this case it also appears that the models are being distributed through Brooklin dealers, since they’ve been given a factory number. The paint on both is quite good, with gold and black decals on the red model and blue and black decorations on the gold one. The gold model has been given a glossy clear top coat, so the clear film surrounding its decals is much less noticeable. The only other change from the original version is neatly painted door handles. As on the originals, the vent window frames, “Ford” logos, and the hood badge are painted over, while all the other trim is done with separate, plated parts. The interior shows a correct single driver’s seat, but there’s no interior behind it. While F1s came from the factory with painted grilles, chromed grilles were a popular dealer-installed accessory, and the chromed taillight bezels are consistent with an early 1952 model. Overall lines look great, and the dimensions are right on 1:43 scale. —Wayne Moyer brasiliapress.com