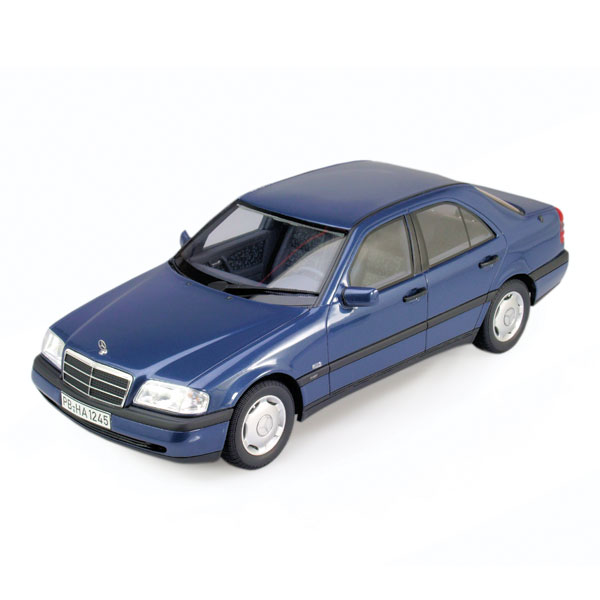 It’s been argued that the 2.2-liter Mercedes-Benz C220 that debuted in 1993 was as much a result of the advent of the microchip as it was a need to pen a successor to Mercedes’ everyman-level 190. The logic (no pun intended) was simple: take a lesson from the makers of those silicon wonders and learn to keep production uniform, quality high, and the end result capable of long life and good service. The result, on Mercedes’ part, wasn’t a high-end cruiser, but it was a capable, rugged, and slick little number that offered up loads of three-pointed-star tech in a smaller, affordable package. This neat BOS model of a 1995 example rolls out in a neat Dark Blue Poly, and it’s about as perfect a model as any we’ve seen recently in resin, right to the photo-etched star on its nose. It’s a straight-axle job – no steering – but it rolls fairly well, and the casting has all the right stuff: great engraving, not a sign of mold lines, and a flawless, finely-flaked metallic finish. The butyrate glazing fronts a neat interior with wood-grain accents and patterned “fabric” seats (done in a nice masked-spray process), and the dash and doors are detailed enough to do the job without requiring any squinting to enjoy – but you will want to crinkle up a little to get a look at the foiled badging and the tiny “Classic” callouts (other available trims were “Sport” and “Elegance”) on the fenders. Sometimes, everyman cars make for great models. This is one of those times. – Joe Kelly, Jr.