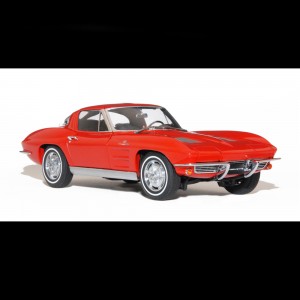 The 1963 model year brought a new body style to the Chevrolet Corvette, and introduced the Sting Ray “split-window” coupe, arguably the most iconic Corvette ever produced. And now AUTOart has brought us the most beautifully rendered model of this iconic car in 1:18 that I’ve ever seen.

Over the first 10 years of the Corvette’s existence, the Corvette had morphed from a personal car, much like Ford’s Thunderbird, to a more performance-oriented sports car.  For the 10 year anniversary, Chevrolet decided to take a giant leap forward, improving the ‘Vette’s performance creds and, at the same time, completely reshaping the body into something that would grab the beholder in a way no previous ‘Vette ever had.  Offering  up to 360 horsepower, the new ‘Vette  also came with an independent rear suspension, reducing the car’s rear unsprung weight, and improving handling.

The body was derived from Pete Brock and Chuck Pohlman’s “Q-Corvette” coupe design study, and Bill Mitchell’s 1959 Sting Ray race car, with the final execution by Larry Shinoda.  The most radical element of the coupe’s design was the boat-tail greenhouse and the split rear window, a feature that only lasted one model year. The distinctive glazing was replaced by a contiguous one-piece rear window for 1964.  All 1963 Sting Rays featured peaked fenders, a crisp beltline running the full perimeter of the car, a Kamm-inspired cropped tail, and retractable quad headlights.  As a package, the early Sting Rays are considered by many to be the best Corvettes ever made.

AUTOart’s 1:18 red 1963 split window coupe is just as nice as the real car – if somewhat smaller.  The body and paint are perfect, benefiting from AUTOart’s laborious prep and polishing.  The window trim and inlaid bright work are, unquestionably, the best in the hobby; shut lines are tight, and the doors’ leading edges open inside the fender – no “dog legs” here.  The headlights can be manually moved to the open or closed position, and the hood features photoetched simulated vent panels .  The car is equipped with whitewalls, which were de rigueur in 1963, and the wheels are covered with the standard hubcaps.  Inside, the interior is nicely done with flocked carpeting covering the footwells and the package panel behind the seats.  AUTOart’s mastery in giving simple plastic a variety of finishes to simulate leather and vinyl is well-represented in here.

AUTOart has read its customers well, and has spent the majority of their effort on the outside of the car where most of the collector’s attention is drawn.  If there is an area for improvement, it is the engine. It lacks the detail, and correct finishes, of the real power plant.

Overall, this is a beautiful piece, and comes highly recommended. 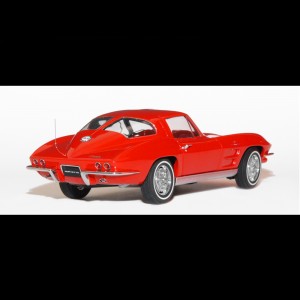 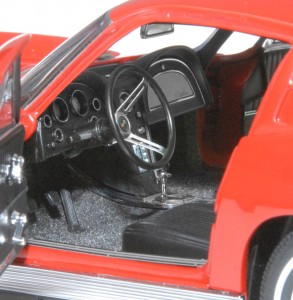 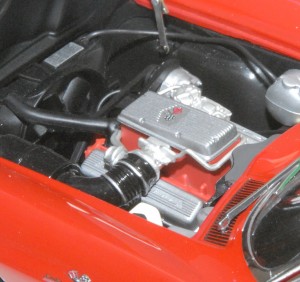 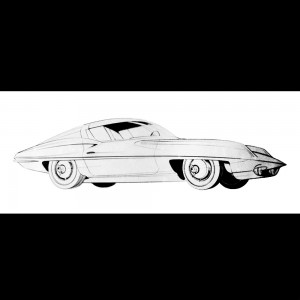 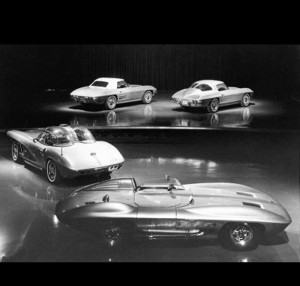