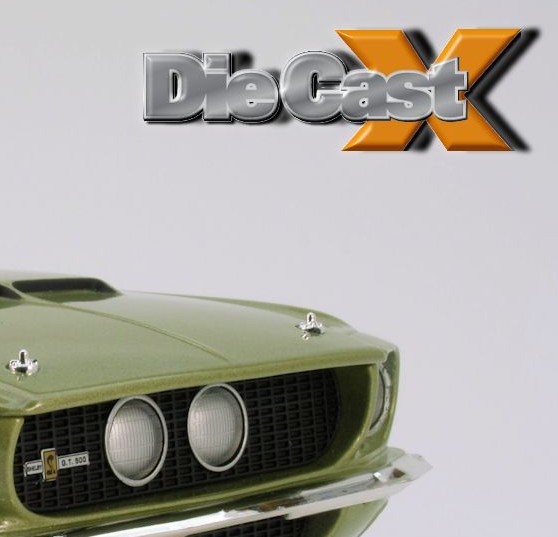 Shelby’s GT500 Mustang was a new kind of extreme muscle car. Not only did the pony’s performance rival that of some of the world’s premiere exotics – it topped most of those hard-riding, sweat-inducing pain chambers with its high level of creature comforts, a fact celebrated on the cover and in the pages of the January 1967 issue of Road & Track magazine. That leads us to this cool, specially packaged  Auto World send-up of the car in 1:18 – yet another classic Ertl tool that has emerged better than the original release, with exquisite lime gold paint, good chrome, and well-placed and registered tampos. The doors and hood open (the trunk is sealed), and behind a well done dash, the moderately detailed 428 “Police Interceptor” V8 is enhanced with decals and labels. The black cabin is a console-delete, with a carpeted floor, tilting seat backs, and a proper roll bar. Though a good effort, the wheels don’t quite match the “MagStar” rims we’ve seen on these cars – and they don’t have the added vent detailing that the cover car’s rollers wear. That’s not a deal breaker: we couldn’t find any Shelbys wearing the print car’s fancier units, and the tidy paint on the model’s drivetrain and the trick overspray detailing on its red oxide primered chassis sold us. This may be a new take on an old mold, but it’s a take that we can happily recommend.  – Joe Kelly, Jr.