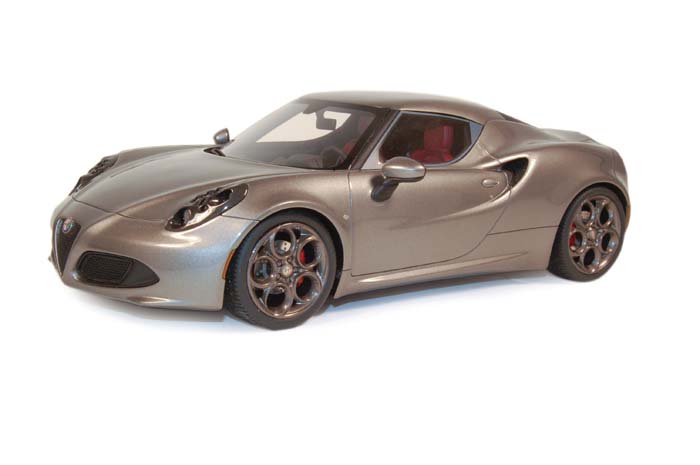 The last Alfa Romeos sold in this country were small but sporty sedans whose focus was definitely utilitarian. After a two-decade absence, Alfa has returned, this time with a two-seat sports car powered by a 240-horsepower turbocharged double-overhead cam four cylinder engine. Its composite body is wrapped around a carbon-fiber and aluminum chassis reportedly weighing a mere 143 pounds, and whose styling makes it’s German and English competition look, well, stuff y. Top Marques Collectibles is a new line of top-quality 1:18 scale resincast models by BBR and built for them “overseas.”  The 4C is one of their first models and there are loads of photos and road tests to show that they have every curve, dip, and bulge of the voluptuous body (there isn’t a straight line on it!) exactly right. Its heavy body is flawless and the silver metallic paint is as fine as you’ll fi nd anywhere.  The only trim on the 4C are the seven (one’s on the steering wheel) scale-size Alfa badges, all with four distinct colors and legible chrome letters. Even the pinhead-size side marker lights have clear lenses! It’s curbside; nothing opens, but the interior and engine upper surfaces are clearly visible through thin, clear “glass.”. Big ventilated disks and calipers are visible behind the authentic and unusual wheels.  anks to Wild About Wheels (215-322-7593) for this early sample. — Wayne Moyer
Top Marques; distributed by bbrmodels.it