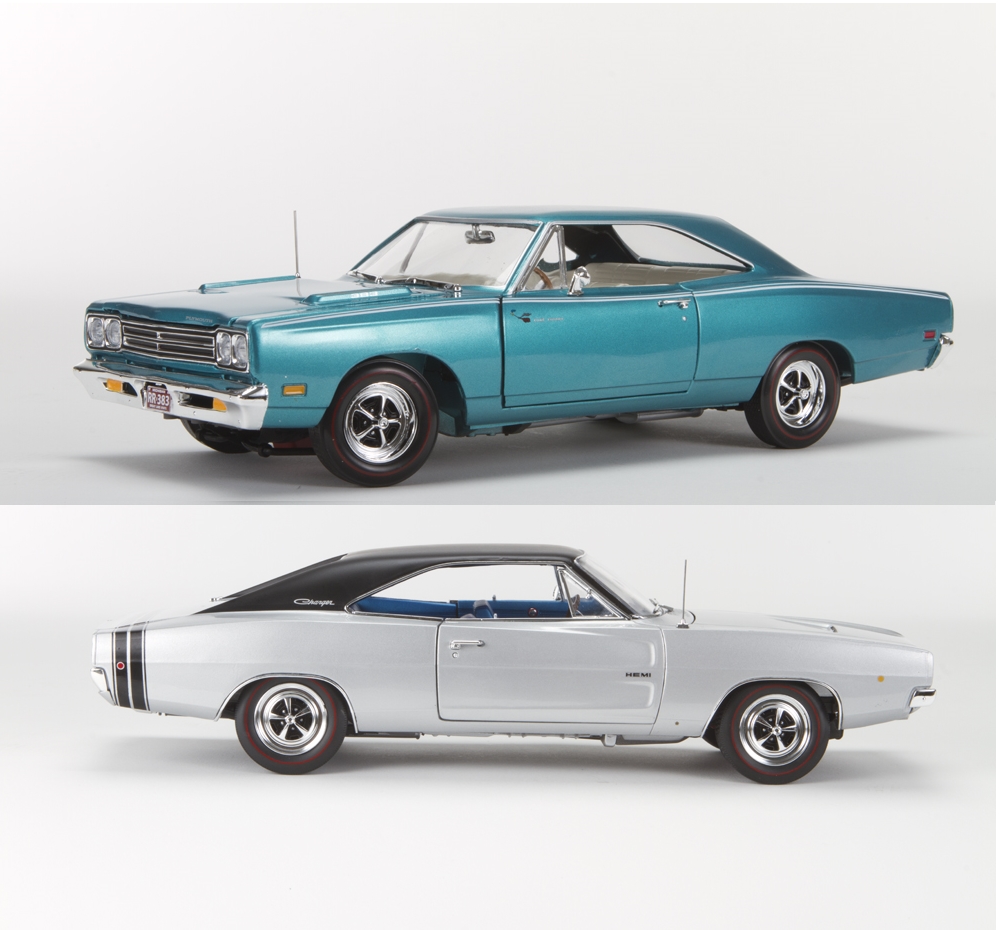 In 1968 Chrysler Corporation was riding a Hemi-powered wave of success. King Richard had just driven his Petty-blue Plymouth to his second NASCAR championship the previous season, and Mopars were the toast (or terror, depending on what you drove!) of stock-class drag racing all across the country. 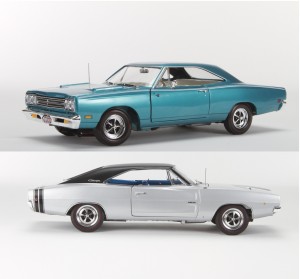 On the street Chrysler redesigned its sales-leading B-Body intermediates for 1968, and in the process debuted two vehicles that were destined to become performance car legends. Plymouth introduced a budget-oriented performance variant of the Belvedere designed to deliver the bang of the upscale GTX for less bucks. It was called the Road Runner, and it immediately captured the imagination—and the sales—of legions of cost-conscious leadfoots! Meanwhile, the Dodge boys were busing transforming their Charger from the mere fastback variant of the slightly stodgy Coronet it had been in its first two years into one of the most eye-catching and pulse-pounding muscle cars of all-time! AutoWorld has just dished up two 1:18 scale variants of Mopar’s killer B’s that do a great job of demonstrating the essence of the Charger and Road Runner. Although both part of the American Muscle line, the two models represent two different levels of detail, much like the cars themselves served two different enthusiast markets. 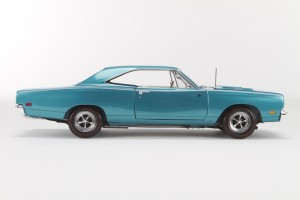 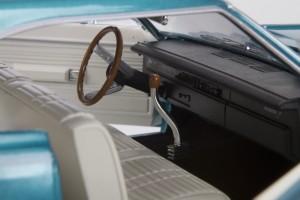 The more modest of the pair is of course the Road Runner. This Seafoam Green hardtop is actually a 1969 model—the second year for the ‘Runner—but it well represents the original bang-for-buck concept. It features the base engine: Mopar’s ‘little’ big-block 383, backed by a 4-speed manual transmission. It even has the base interior with a bench seat! This is a renovation of the old Ertl American Muscle Road Runner casting, and it has several improvements inside and out. To begin with, the paint is considerably nicer: smooth and even, with a slightly metallic sheen and fine pin striping. The decals and badging are hot printed with considerable detail as well. The only obvious exterior clues that this is a repurposed casting from yesteryear are the window surrounds which are painted on rather than cast. 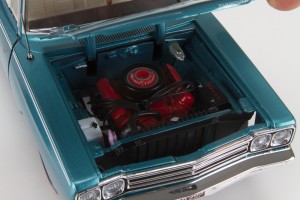 Opening the hood, trunk and doors reveals old-school dogleg hinges. The interior is a mixed bag. Carpeting and a detailed instrument panel are welcome additions, but the eggshell-white bench seats have no seatbelts and the shifter boot has not been painted. There are also no pedals in the foot well. This contrasts with the engine bay, in which AutoWorld really worked some updating magic. There is now a fully wired power plant, with individually painted block, heads and manifolds—a huge improvement over the old molded-in-color lump. Out back the trunk has been upgraded with a plastic trunk mat and a fully detailed spare tire. It, like the four on which the Plymouth sits, are well sized and contoured, with the appropriate depth and nice paintwork on the Magnum 500-style wheels. Underneath, take a moment to admire the nice paint there too, including chassis overspray. 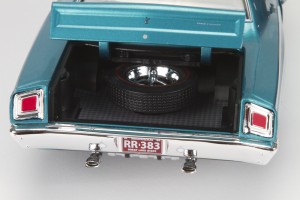 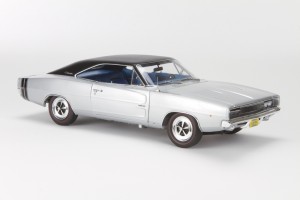 The all-new, sleek and sexy Charger was a revelation in 1968, and so too is AutoWorld’s version. In the last few years we’ve seen several incarnations of this casting (which was introduced as one of the final Authentics series before Ertl transferred the tooling to AutoWorld) and it continues to impress. The casting lines are crisp and the contours capture the Coke-bottle curves that made the 2nd-gen Charger an instant classic. The silver is a subtle hue, offset nicely by the black top and tail bands, and especially by the bright blue interior. I do wish the top had a bit more texture (like the version of this casting GreenLight issued as the Bullitt ’68 Charger.) This is a modern casting with cast pieces for the window surrounds, door and wheel well trim (among other things), and so it has a stronger presence than its sibling Road Runner. And rightly so: this R/T is part of AutoWorld’s Hemi 50th Anniversary series, and so it features the legendary 426 “Elephant Motor” under hood. It’s hard to match the appeal of a Hemi Charger R/T, just like it was hard for competitors to match its speed! 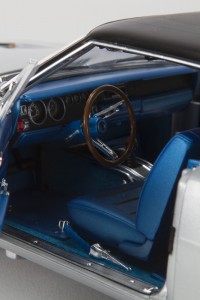 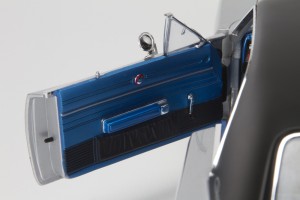 Like the ‘Runner, the Charger is a 4-speed car, but this is no stripped down base model. The Hemi alone would have added $605 to the window sticker (raising the cost of the Charger by more than 20%!), so obviously Dodge didn’t skimp on other creature comforts. In addition to style items like revolving headlamps and those signature flying buttress C-pillars, this R/T has sport bucket seats with black stripes contrasting the bright blue color, a sport gauge cluster and a flashy chrome-trimmed center console. Collectors will admire the scale touches like hidden hinges, folding seatbacks, woven seatbelts with metal buckles, and flocked carpet with matching floor mats. There’s a mat in the trunk too—very much along the lines of the Plymouth’s—and a spare with a jack tucked in the wheel depression. 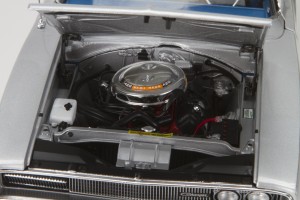 You’re saying to yourself ‘That’s all great, but what about the Hemi?’ Have no fear—the Charger also delivers here! Hoist the hood up on its scissor hinges and the 426 Hemi is a powerhouse of scale detail, starting with the basic solidity of the Road Runner’s engine bay and then taking things up several notches. In addition to plug wires, the 426 also sports color-coded battery cables, heater hoses, and hoses for the chrome breather caps atop the humungous black crackle-finish valve covers. There is also a selection of awesome fender tags and warning labels. 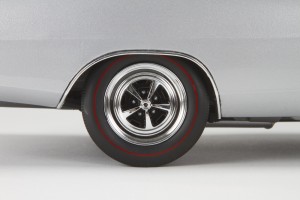 Rolling stock is one area where the Charger trails the Road Runner. It too features Magnum 500-style wheels, but oddly these are too tall and too shallow to be scale—something we’ve noticed before on this casting. The chassis regains the lost ground though, with functional springs that settle nicely under the weight of the model, and a driveshaft that revolves when the rear wheels are given a spin. 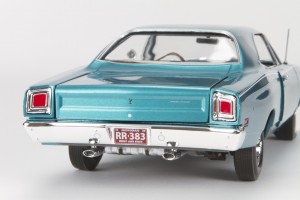 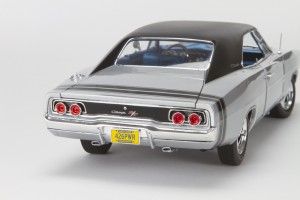 As you can see from these photos, this wasn’t exactly a photo finish—nor should it be between a 383 and a Hemi. The Road Runner is a nice updating of a classic Ertl tool, but it cannot keep up with the feature-laden Hemi Charger. The newer tooling and extra detail give the Dodge a comfortable victory. And unlike the actual cars, where the value-oriented Road Runner 383 cost a whopping 30% less than a Hemi Charger, both AutoWorld B-bodies are listed for the same suggested retail: $84.99. And truthfully both are enjoyable models with style, swagger and historical significance. But if you’ve only got the cash for one it’s hard to argue with the phenomenal value of the Charger!

For more info, check out www.autoworldstore.com.