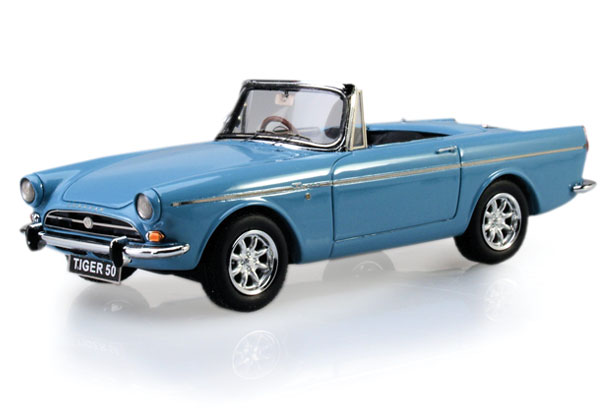 The Rootes Group built the Sunbeam Tiger for one purpose – to bring U.S. dollars to the U.K. All of the 1,649 cars built in 1964 were shipped over here, and the first right-hand-drive Tiger wasn’t built until January 7,  1965. To commemorate the 50th anniversary of that first “wrong side” Tiger, Automodello has released this beautiful miniature of it for the British-based Sunbeam Tiger Owner’s Club. The model has the rounded hood corners add leaded-in cowl seams of the early Mark I, but also the square front lower door corner and visible rocker panel joint of later cars – details which match a photo of another English Tiger, as seen in author William Carroll’s Tiger: An Exceptional Motorcar. The beautifully done RHD dash and pedals (only two??), optional Minilite wheels, and “Mediterranean Blue” paint (my Tiger sales brochure says calls out “Wedgwood Blue” ) are the only changes from the original version, but this RHD model is limited to just 165 pieces. Scale fidelity of the photo-etched chrome trim must be seen to be believed; the side stripe is absolutely straight with tiny “Tiger” scripts and Rootes badging at the rear, while the SUNBEAM letters are perfectly aligned. Yes, the all-important “Powered by Ford” badge is here, too. Workmanship is flawless and dimensions are right on scale – tiny and beautifully done.  – Wayne Moyer