Introduced at the Goodwood Festival of Speed in 2016, the Mercedes-AMG GT R Coupe was tasked with taking the fight to the Porsche 911 GT3. With more power, more effective aerodynamics, less weight, and a chassis honed for serious track work, it is arguably the most complete, compelling, and capable car AMG has ever made. AMG’s own nickname for it, the “Beast of the Green Hell,” makes reference to its intense development on the infamous Nürburgring racetrack and draws a clear link to the striking (and exclusive) matte-finish paint job on the launch car called “AMG Green Hell Magno.” 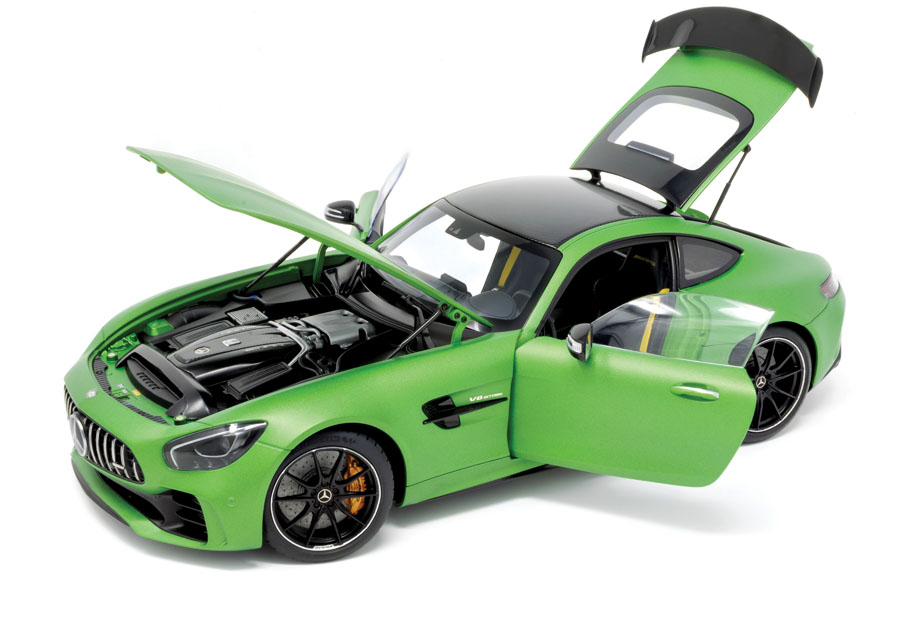 The front mid-engine layout allows for 52.7 percent of the weight to sit on the rear tires. And what an engine it is! A twin-turbo V-8 pushing out 577bhp and a tire-shredding 516 lb.-ft. of torque allows the AMG GT R to do 0–60 in just 3.5 seconds, with a top speed of 198mph. Thanks to front and rear fenders that have been stretched by 46mm and 57mm, respectively, to cover the wider track, the R has a lot more visual heft than the GT base car. The new Panamericana-inspired front grille from the 2016 GT3 race car is also featured for the first time on an AMG production vehicle. Add rear-wheel steering and a unique nine-level selectable traction-control system and this produces a serious track-day weapon. Eat your heart out, 911 GT3!

As soon as a new performance car comes on the market, we scale model collectors start salivating over which brand will release it and in what colors. With the GT R being Mercedes-AMG’s first supercar since the epic 300SL-inspired SLS AMG, I was certainly champing at the bit to add the “Beast of the Green Hell’ to my collection. There were plenty to choose from. The likes of Norev (opening diecast), GT Spirit (sealed resin), Minichamps (sealed diecast), and even newcomer Almost Real (opening diecast) all arrived at the party before AUTOart finally released the opening composite version we have here. In fact, it was so late in releasing it that Mercedes-AMG had already announced the even-more-hard-core AMG GT R Pro edition to sit at the top of the AMG GT lineup. This left many collectors wishing AUTOart would have been a bit quicker to market. So is it a case of better late than never? Let’s take a look and see.

Available in Designo Cardinal Red, AMG Solarbeam Yellow, Brilliant Blue, and the all-important AMG Green Hell Magno, it is the latter I opted for. AUTOart absolutely nailed this color! As the brand has been progressing and finessing the fit and finish on its composite line of models, it has faced criticism along the way. Collectors are a discerning bunch. We spend our hard-earned cash on this hobby (just don’t tell our partners exactly how much!) and don’t like to be short-changed, but with this model, AUTOart has definitely found its feet, and I hope this continues with each future release. The matte finish and green hue are, for me, the best effort any manufacturer has managed to reproduce in 1:18 thus far.

I’m so glad AUTOart opted for the 5-twin-spoke AMG forged alloys instead of the AMG Performance ones, which feature a much more prominent chrome strip around the edge of the wheel. I feel the Performance wheels reduce the aforementioned visual heft somewhat, and the standard forged alloys finished in black have just enough of a silver lip to look the part. The optional carbon-ceramic high-performance brakes, featuring huge 15.8-inch-diameter discs at the front and 14.2 at the rear, have been fitted to this model and painted a snazzy bronze color. Look closely and you’ll see the clearly legible AMG logo and “CARBON CERAMIC” text printed on the calipers. Credit to AUTOart for adding brand and size markings on the tire sidewalls, which accurately replicate the staggered 275/35 ZR 19 front and 325/30 ZR 20 rear Michelin Pilot Sport Cup 2s. I hate it when manufacturers don’t include the branding on the tire sidewalls. Of the five manufacturers that have replicated the AMG GT R in 1:18 scale, only AUTOart has rendered accurate sidewalls, and it deserves immense praise for it.

Other exterior points of note are the well-crafted lights and the great use of photo-etched badges all around. I can’t remember a time when AUTOart has let us down on either of these elements. The large and imposing Panamericana grille, with its vertical fins and a slight forward inclination, was meant to create a “shark-nose” impression according to Mercedes press materials. Sharklike or no, take a closer look at the large air intakes in the lower front bumper and you’ll notice the extra detail AUTOart has added in the form of the silver horizontal radiator fins, which add real depth to the model. 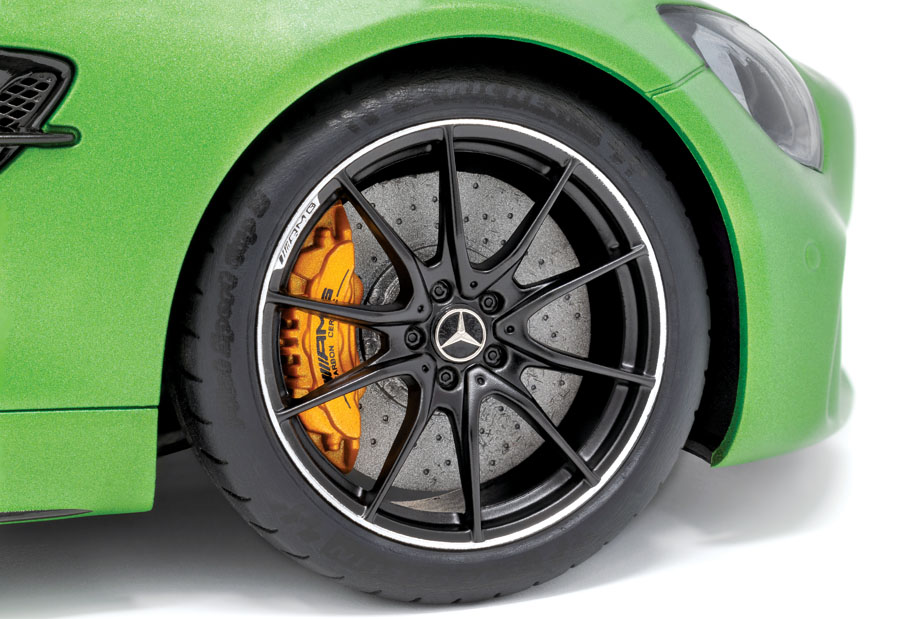 Detail on the carbon-ceramic brakes is fantastic in color, texture and the text printed on the calipers. AUTOart’s tires, complete with sidewall markings, are always among the best in the industry. 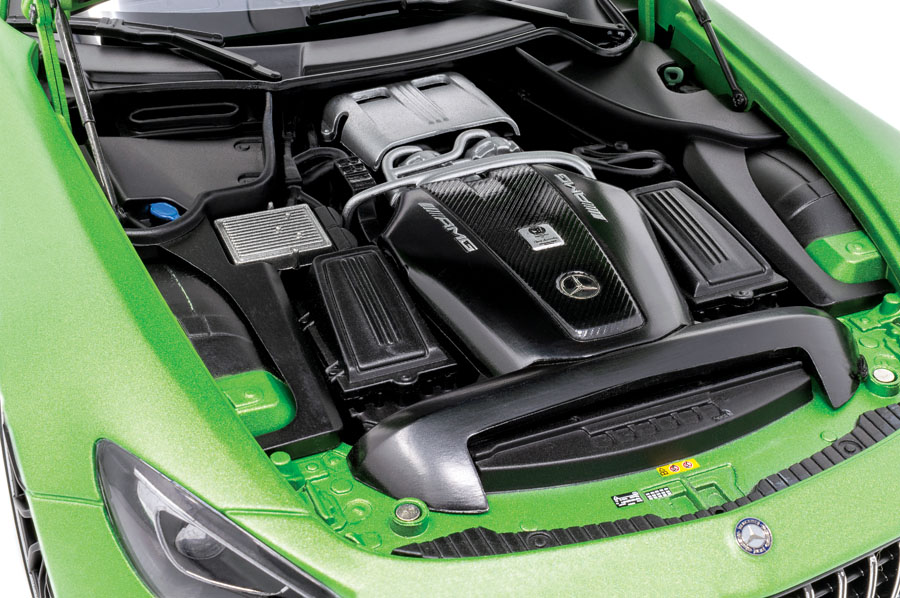 Much of the engine is hidden by a carbon fiber pattern cover, but the engine builder plaque is nicely decorated, and some technical detail is present on the pair of turbochargers at the back of the compartment.

One of the criticisms leveled at AUTOart’s composite line is the lack of weight compared to good ol’ diecast. Personally, if it means less weight on my glass shelves, less chance of flat spots on the tires, and the ability for all the opening parts to continue opening years into the future, I’m all for it. And if it eliminates the dreaded zinc rash that has plagued many a diecast model over the years, well, that represents a big win for the hobby. For all you diehard diecasters out there, you might be disappointed by the incredibly lightweight hood covering that thunderous V-8 engine. When you have the model in your hand, you come to appreciate the front mid-engine layout because you see just how far back the engine sits in the car. Most modern cars have the majority of their engines covered in big plastic covers, and the AMG GT R is no different. What is visible AUTOart has replicated to a satisfactory degree: The large cover with the three-pointed star inset at the bottom and the AMG badges on either side of the central carbon section are all present and correct. The carbon section itself could benefit from being glossier, but it is nice to see the engine-builder plaque that reinforces AMG’s “one man, one engine” philosophy. Just aft of the carbon cover, you can see a bit of the turbocharger plumbing painted matte silver. The blue windscreen-washer bottle and the green dipstick for the engine oil are also present. The struts and the requisite warning stickers under the hood are all nicely replicated. 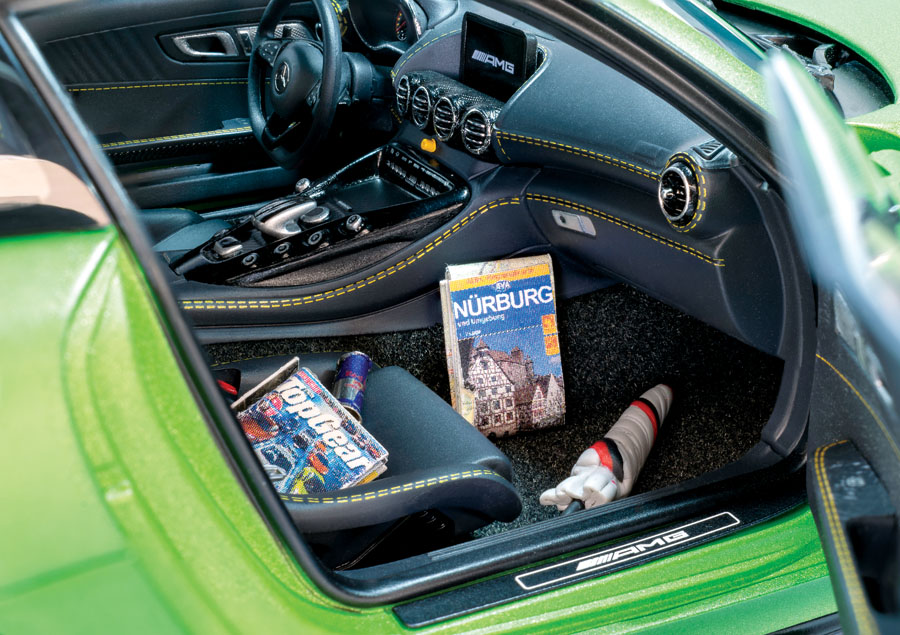 AUTOart really stepped it up with the interior, especially with the yellow stitching on the seats. The detail on the switchgear is another highlight. I added a few of my own 1:18 scale touches in the passenger’s seat and floor! 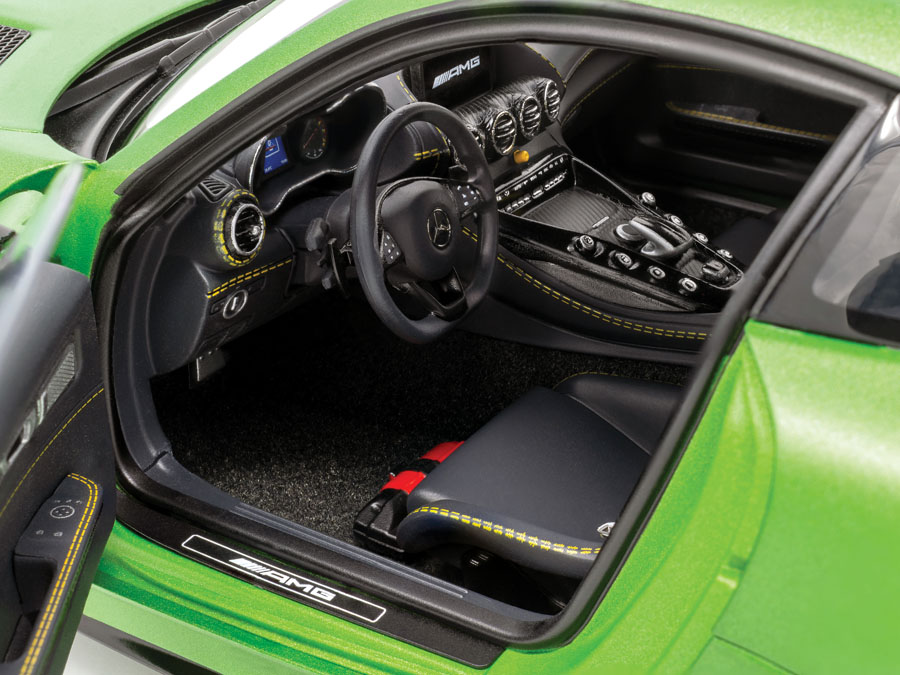 Pull open the extremely light composite doors and drink in all the lovely interior details. It is always nice to have real flocked carpets in a model, and this one certainly doesn’t disappoint. The excellent yellow contrast stitching works well with the yellow seatbelts and yellow traction-control knob in the center of the dashboard—I just wish AUTOart would have used real fabric belts instead of molded rubber. AUTOart may have stepped up its game on the interior details (especially the stitching) in response to Almost Real’s efforts that collectors were raving about before this version came to market. Healthy competition can only be good for collectors. Everything else inside looks par for the course for an AUTOart model in the form of well-defined buttons, clear dials, and even the yellow AMG logos on the headrests.

So you’re in the market for a 1:18 Mercedes-AMG GT R. With five different manufacturers in the running, the question becomes “Which should you pick?” If you must have opening features, there are still three: Norev, Almost Real, and this one from AUTOart. If price is your primary concern, then the Norev is probably for you. If you can splash the extra cash, I implore you to look past the diecast versus composite debate and instead concentrate on what looks better on display and what has the better level of detail. For me, this is an easy win for AUTOart. The shut lines are tight (one of the benefits of going composite), the paint finish is immaculate, and the stance of the model is wide and mean. AUTOart’s wheel and tire detail is the best available, and the interior is the equal of the more expensive Almost Real GT R. The AUTOart Mercedes-AMG GT R is a well-executed model, especially in this color. You won’t be disappointed with your decision to purchase one. 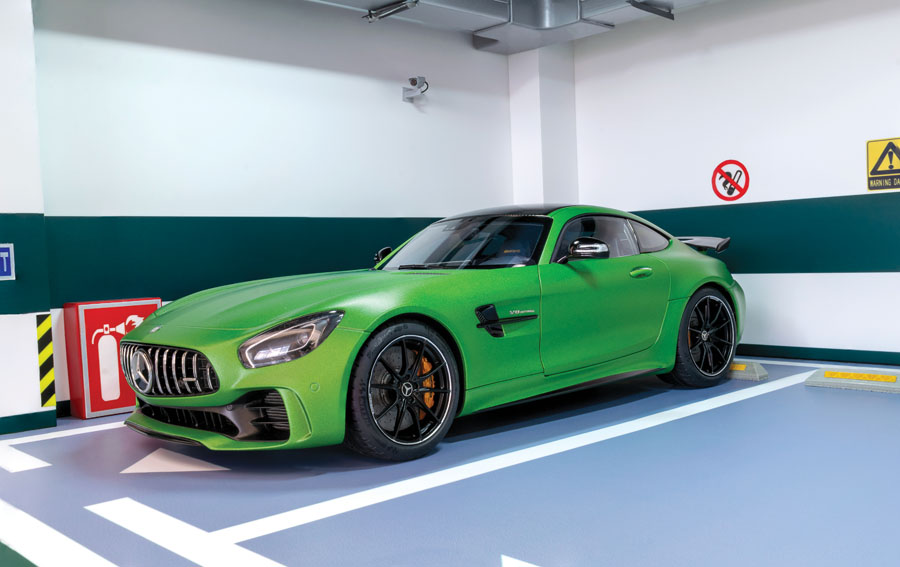 The stance of the AMG GT R is highly realistic. In this scale parking garage diorama it might be confused for the real thing.

by Chaim Haffner
Editor’s Note: Chaim comes to us as the voice behind “The Model Car Critic” diecast blog site (themodelcarcritic.com). We’re happy to have his insights here in Die Cast X, and be sure to check out his blog for some of his other reviews.