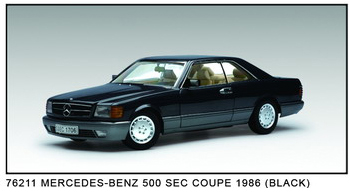 The W126 version of Mercedes-Benz S-class received a substancial makeover in 1986, receiving cosmetic and engineering upgrades that kept the model fresh through its replacement in 1991 and helping it sell nearly 900,000 copies over its 12-year lifespan — the best-selling S-class of all time.

The coupe version, known as the SEC, was produced in much lower volumes (less than 10% of S-classes were 2-doors), but it was perhaps the ultimate expression of exacutive success during the late stages of the yuppie years. It may have been extravagant but it was also safe and fairly practical. The 1986 S was the first model to introduce passenger-side airbags (it had been the first to introduce driver-side bags in ’81) and it also brought seatbelt pre-tensioners and traction control to the table long before other manufacturers. V-8 versions brought a healthy dose of performance as well, with the 5.0L producing a very respectable 240 horsepower. Unfortunately AUTOart doesn’t (yet) offer an SEC with the 5.6L that was the top performer in the U.S. Still, this model should deliver on traditional AUTOart strengths — beautiful finish and interior — made all the more appealing by the styling updates of the 1986 model year.