Throughout the 1950s, Jaguar sat atop the sports car world. The Coventry-based sports-car specialist had redefined the genre with its XK120, and the competition (C-Type) version of it delivered Jaguar its first Le Mans victory in 1951—the first of five wins over the next seven years—capped by three in a row (from ’55 to ’57) in the exquisite D-Type sports prototype. What then does a company do to follow up a decade like that?

It had evolved the XK120 road car into the 140, the 150, and finally the XK150 S with a robust 265hp 3.8L version of Jaguar’s all-conquering XK inline-6 engine in 1959. But after pushing the sports-car world back on its heels for most of the ’50s, competitors had begun to catch up. Ferrari had prevailed at Le Mans in 1958 and fielded a brace of gorgeous and potent road-going 250 GTs. Fellow British icon Aston Martin won in 1959 and released the elegant and capable DB4 GT. By 1960, the XK150 had begun to look a bit outdated, but the folks in Coventry were hardly resting on their laurels. 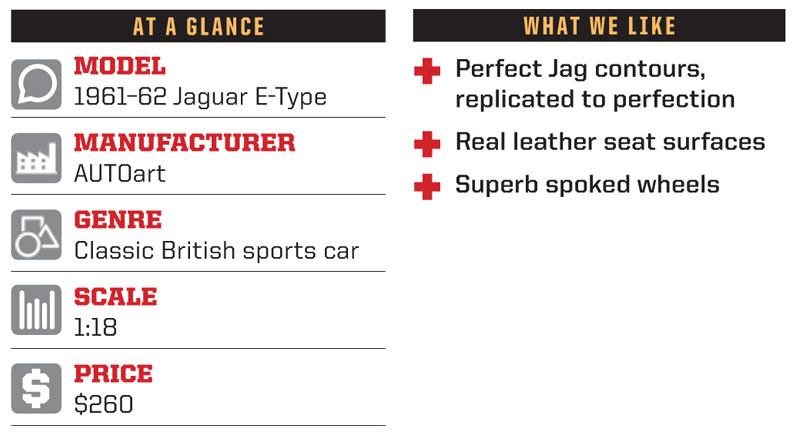 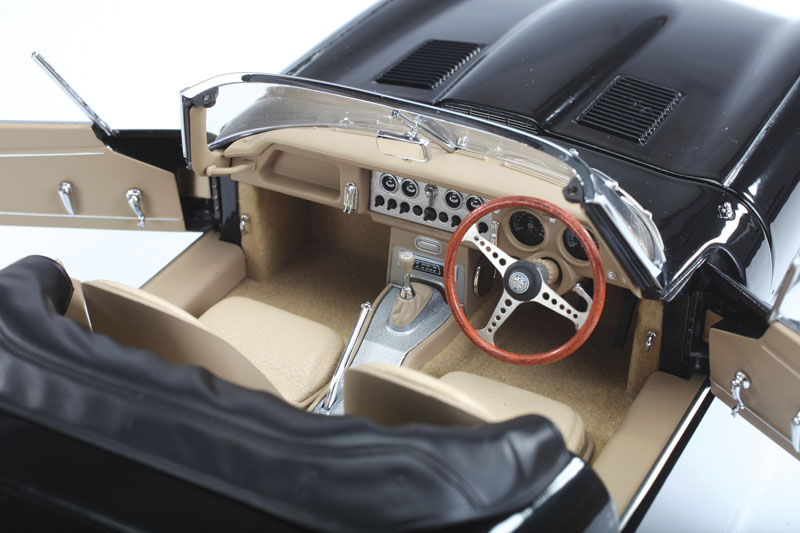 The replica uses real leather on the seating surfaces, contrasted by a brushed aluminum console and dash trim.

Jaguar designers knew they needed something special, so for inspiration they looked to the beautiful streamlined bodywork of that ’57 D-Type race car. In fact, they tapped the race team to develop the next road car. Naturally, they named it the “E-Type.” Like the D, it eschewed the traditional ladder frame for front and rear subframes bolted directly to a monocoque center tub. For production duty, the E-Type traded the D’s aluminum tub for steel, but even so, the E-Type was both stiffer and lighter than the outgoing XK150, and using the same 265hp 3.8L engine as the S yielded performance that was markedly improved. But that fact took a backseat to the appearance. Jaguar drove its lone prototype the 700 miles from Coventry to the Geneva Motor Show in 1961 to reveal the car to the world. None other than Enzo Ferrari promptly declared the E-Type “the most beautiful car ever made.” The motoring world agreed. The E-Type promptly set the new standard for sports cars, and even today, nearly 60 years later, Enzo’s benediction is not misplaced. The E-Type is still considered among the most beautiful cars ever made and continues to guide the styling direction of Jaguar.

The AUTOart finish is exemplary, and the casting captures perfectly the shape that influences Jaguar design even today, nearly 60 years later.

Such a pivotal piece of auto­motive history makes for an ideal scale replica. No one knows this better than AUTOart, who over the years has produced all three Series incarnations of the E-Type in both coupé and roadster form, and in both 1:43 and 1:18. It has just revised its 1:18 Series I 3.8L cars (1961–64), so let’s check out the updates. British Racing Green is the proper color for a Jag, and this shade is deep and glossy, almost black in certain lights. The roadster is officially black, and equally glossy. Tasteful chrome trim lines trace back from the oval headlight bezels along the tops of dramatically long front fenders, while the split wraparound rear bumpers mark the tapered rear fenders. Taken together, they create the graceful long-hood/short-deck profile that defines the E-Type. All the trim is separately cast and beautifully chromed, with the exception of the “Jaguar” script on the rear deck, which is etched. 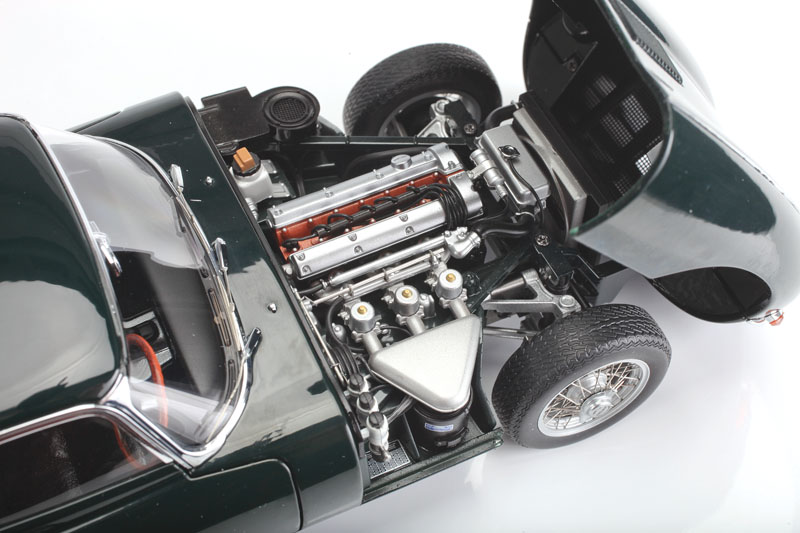 Above: The Series 1 E-Type carried the 265hp 3.8L version of Jaguar’s XK inline-6 for its first four model years. AUTOart’s rendition is outstanding, with a highly detailed cylinder head and triple SU carbs.

The brilliant styling and excep­tional performance were keys to the E-Type’s success, made all the more impressive by its surprisingly reasonable price. At about $5,600, it was not inexpensive, but it rung in at half the price of anything else matching its 150mph performance potential. But it also delivered impressive interior style and luxury for that money, with leather bucket seats and a striking aluminum center-console trim in the first two model years—which AUTOart’s model depicts. The model uses a swatch of real leather for the seating surfaces and metal for the console and dash trim. The gauges and switchgear are superbly detailed as well, and the steering wheel has replicated the woodgrain rather well with colored plastic.

I already mentioned that the E-Type was developed by engineers from Jaguar’s racing division, and one visible clue to that is the bonnet. Front-hinged hoods are not unusual for sports cars, but on the Jag, the entire front half of the bodywork levers forward, exposing the big inline-6 in its race-bred mounting position behind the front axle to yield an optimal 50/50 front/rear weight balance. That setup also gives spectacular visual access to the model’s engine bay, where you can see the big DOHC six re-created in wonderful detail. On the right sit the triple SU carburetors and their triangular air-cleaner assembly tucked into the right front fender. The exhaust exits left out of a pair of 3-into-1 manifolds painted an appropriate cast-iron color. The left also has the battery and the intake for the cabin ventilation system—all detailed. The expansive hood opening also reveals most of the front suspension with its double wishbone and torsion bar setup.

Speaking of suspension, the rear was fully independent as well and features exotic inboard disc brakes, all of which is replicated in gratifying detail. That brings us the lovely spoked wheels. The spokes are hand-assembled individual stainless-steel pieces, and they are fabulous. The tires, which seem amusingly narrow by modern standards, are realistic in shape and size, and feature authentic tread patterns. 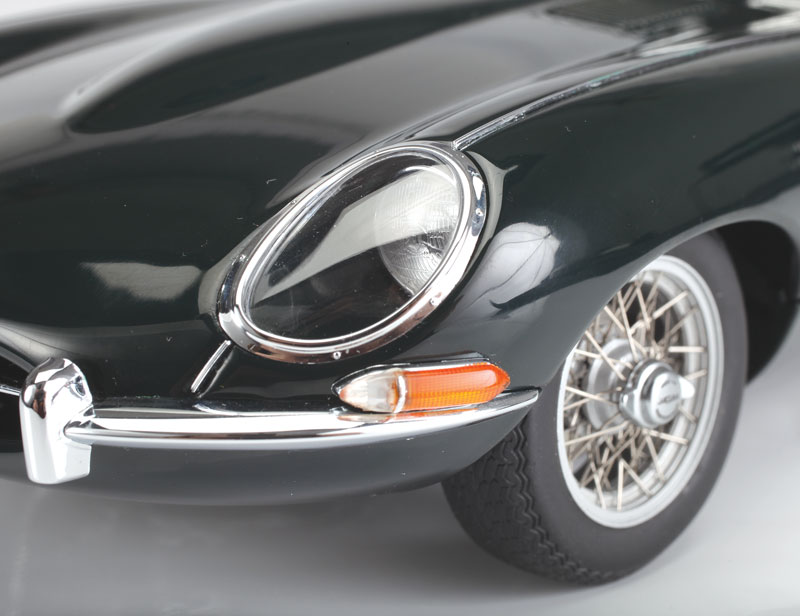 FINAL THOUGHTS
No one really disputes the beauty or importance of the Jaguar E-Type, but it can be easy to forget just how striking it really is without a visual reminder in front of you. That’s what this model does for me—brings the perfection of the design right back into focus. It renews one’s appreciation for what Jaguar designers achieved, even as we marvel at what AUTOart’s designers were able to achieve with their replica. The company proudly points out the 500+ pieces that go into making the E-Type, making this among the most detailed diecasts ever made of the car. Now that it has been updated and reissued, a new generation of collectors has a chance to enjoy it. No connoisseurs of classic sports cars should be without an E-Type in their collection, and AUTOart’s is among the best offered any­where in 1:18.