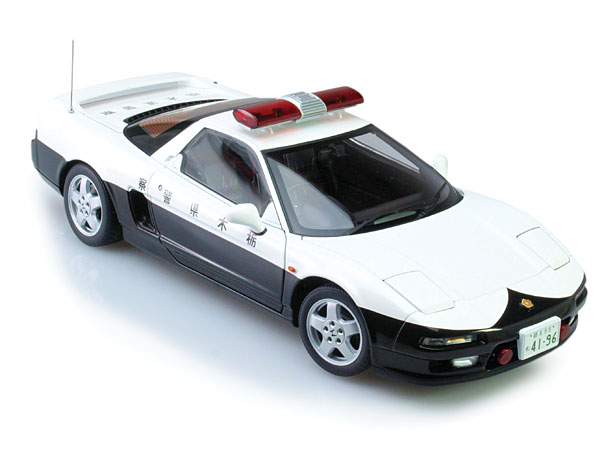 Anyone who’s been tailed by a trooper in a striped-up Mustang, Camaro or Hemi Charger can tell you that hot shoe cop cars aren’t uncommon. But when the lawman is rolling in an exotic … that’s a different story. AUTOart has taken one of their better recent mold sets —  a killer early ’90s NSX (in home market “Honda” guise) – and done it up in Japanese black-and-white police car scheme.  They’ve added a few touches — like the light bar up top, and the radio bolted to the dash (as well as the corresponding antenna for the rear fender), but the model beneath the badge is easily the highest-detail take on the classic aluminum-bodied NSX that’s yet been done in mid-scale, with opening doors, hood and trunk, working pop-ups for the projector-style headlights, and a fully wired, piped, and labeled miniature of the car’s mid-mounted 270HP “C30A” V6 under its rear window/engine cover. That may not sound like a lot of grunt, but in the superlight NSX, that was more than enough to pull the car to 60mph in the five-second range. Thanks to development input from none other than the late Ayrton Senna, the car’s suspension kept it planted in the corners – great stuff when chasing Yakuza out of the prefecture. Steel brake discs, real hinges, great lensing and glazing, and the usual AUTOart precision in the paint and build make it all the more arresting.  — Joe Kelly, Jr.