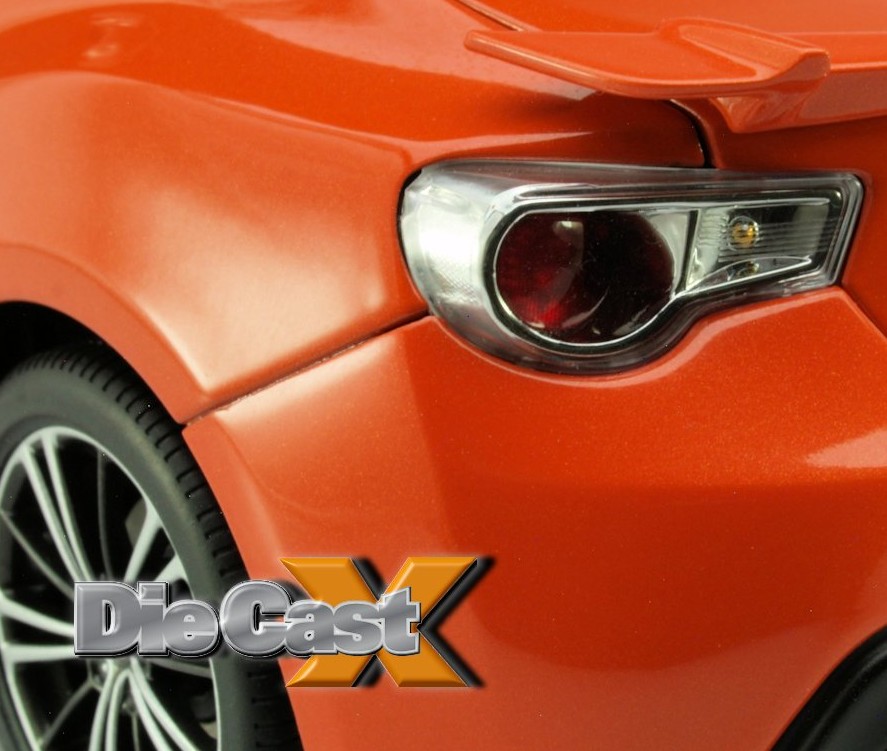 In its home market, the car we know here as the Scion FR-S and Subaru BRZ is sold as the Toyota 86 (say “Eight-Six”, or, if you’re a local, “Hachi-Roku“). In its barest Japan-only iteration, the boxer-engined 2+2 rear driver doesn’t even wear hubcaps – just steel wheels – and tosses just about every amenity, including painted bumpers, in favor of light weight and low cost. On the way to its top “GT Limited” trim level, the 86 goes incrementally Hollywood, topping out with leather seats, HED headlights, a rear spoiler, slick 17″ wheels, and enough buttons and gizmos to keep any driver busy. Of course, the 50/50 weight distribution and cross-line 200 horse engine occupy pilots with more important matters than dual-zone climate control. Tail happy and engaging, the rig is a joy for purists, but may have proven too white-knuckled to garner the mass appeal that Toyota and Subaru had hoped for.

One thing’s for sure: it looks great, as evidenced by this AUTOart model of the home turf GT Limited. This one wears our favorite color, called “Hot Lava” by Scion (and “orange” on the AUTOart web site), and it rolls on premium wheels with steel discs behind their spidery spokes, and up-option rear spoiler and fog lights. We were bit, hard, by the model’s paint – it’s gorgeous, with a dead-on fine-scale metallic, and we’re equally impressed with the precision of all the fitted parts, including the screened grille, the perfectly aligned and placed headlights and taillights, and the Toyota crests at the nose and tail. The doors open, as do the trunk and hood, the wheels steer, and it’s all been screwed together very well, from the Lexus LFA-inspired mouth to the twice-pipes peeking out at the rear.

Getting the doors open can be a little fiddly – they’re tight, and there’s no finger hold (resist the temptation to yank on the mirrors, and be really careful if it’s the door handles you’re considering), so we used a bit of fun tack to get a grip. The RHD cabin is all here, and not only matches our own forays into North American examples of the car, but does so with high grade plastic castings and applied textures for the two-toned seats, dash (with a slick bezel, gauges, and navitainment screen), fabric belts, and a carpeted floor, all set below a proper carved-out roof panel. Even the boot gets love, with a detailed and decod’ lid and a carpeted floor.

All good, so far – but under the hood, AUTOart bumps up the model’s appeal with a killer scaling of the Subaru-sourced four cylinder D-4S boxer, set into the engine bay among multiple levels of wiring, cabling, and plumbing. Done in remarkable hard plastic, the motor’s upper regions are cast and decorated down to every last detail. Even the bolt heads at the struts and braces are silvered. Now, that’s thorough.

All in all, a great model car. If you’re looking for a US-spec variant, seek out the LHD versions that AUTOart’s fielding. And if you see one on the road, please don’t wave. That driver is busy.