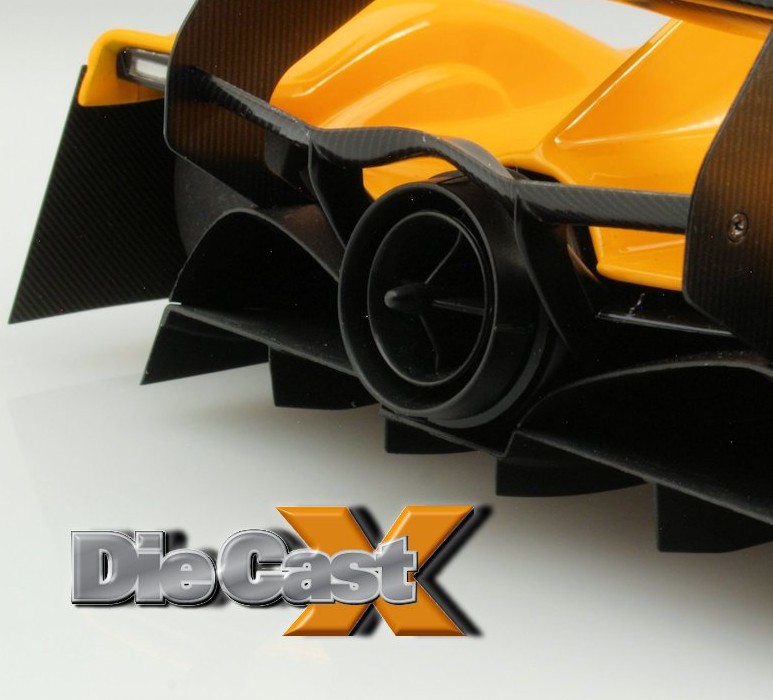 Movie and TV cars in scale are always fun. ‘Sixties kids had James Bond’s DB5, the Barris Batmobile, the Black Beauty, and the Munster Koach; younger fans have K.I.T.T., the General Lee – or, more recently, any of the Dark Knight Batmobiles, Batpods,  and Bat… well, everything. That guy gets around.

The common thread? All of the above are actual cars, built to perform in front of cameras. Now, the driving simulation game Gran Turismo 5 has given us a full-on-fantasy virtual automobile, the Red Bull X2010, which in turn has spawned an AUTOart 1:18 Signature Series replica. The best part is, the virtu-mobile this model represents was brought about by no less a luminary than Red Bull’s F1 Zen master Adrian Newey (hence the corporate tie-in), who did some mouse-and-stylus jockeying on Polyphony Digital’s original plans for the 1500-horse, toss-the-rules super racer. Starting with a design penned by Polyphony CEO/avid racer Kazunori Yamauchi, Newey facelifted, streamlined, and equipped the X2010 with a fighter-plane canopy above and vacuum-traction fan technology below. This allows the X2010 to literally suck itself onto the track at any speed, and the result is an 8.75G-capable car that tops out – on the screen – at 279 miles per hour. Those numbers allowed Red Bull’s ace Sebastian Vettel to virtually best the course record at Suzuka by 20 seconds, and do the ‘Ring in one minute and four.

No wonder this thing looks like it’s moving when parked on the table. The light orange is an eye-searing hue, and it’s flawless under the model’s minimal livery. Accent pieces for the suspension arms, fender struts, and wings are done in a carbon fiber pattern with just the right amount of gloss to pull off the realism; at the rear, the wheels are hidden behind scale-thin steel spats that are screwed to the car with watch-grade hardware. That’s neat, but it pales in comparison to the pod-style front wheels, encased in “Bridgestone” deco’d nacelles. Tweak these, and the steering wheel moves along; don’t try to get your fingers into the cockpit to verify the connection from the other end, or you’ll probably prang the delicate, multi-hinged canopy in the process. Better to just take in the heads-up display, textured seat, and the neat graphics applied to the steering wheel screen. The rest of the car is sealed – no sign of its bespoke twin-turbo V6 ahead of the twin metal exhausts poking out of the cross-vented deck – but everything that’s visible, from the wild baffles and screened ducts below to the staggering complexity of the car’s fan-equipped rear end, is done to the usual high AUTOart standard.

Red Bull recently built a full-scale mockup of the car, and further designs show that there’s even more room for improvement. No word on whether these will ever be put on a track, for real. We sure hope so. Whether you’re a gamer, or just like the idea of pushing the limits, this one is too cool to miss.