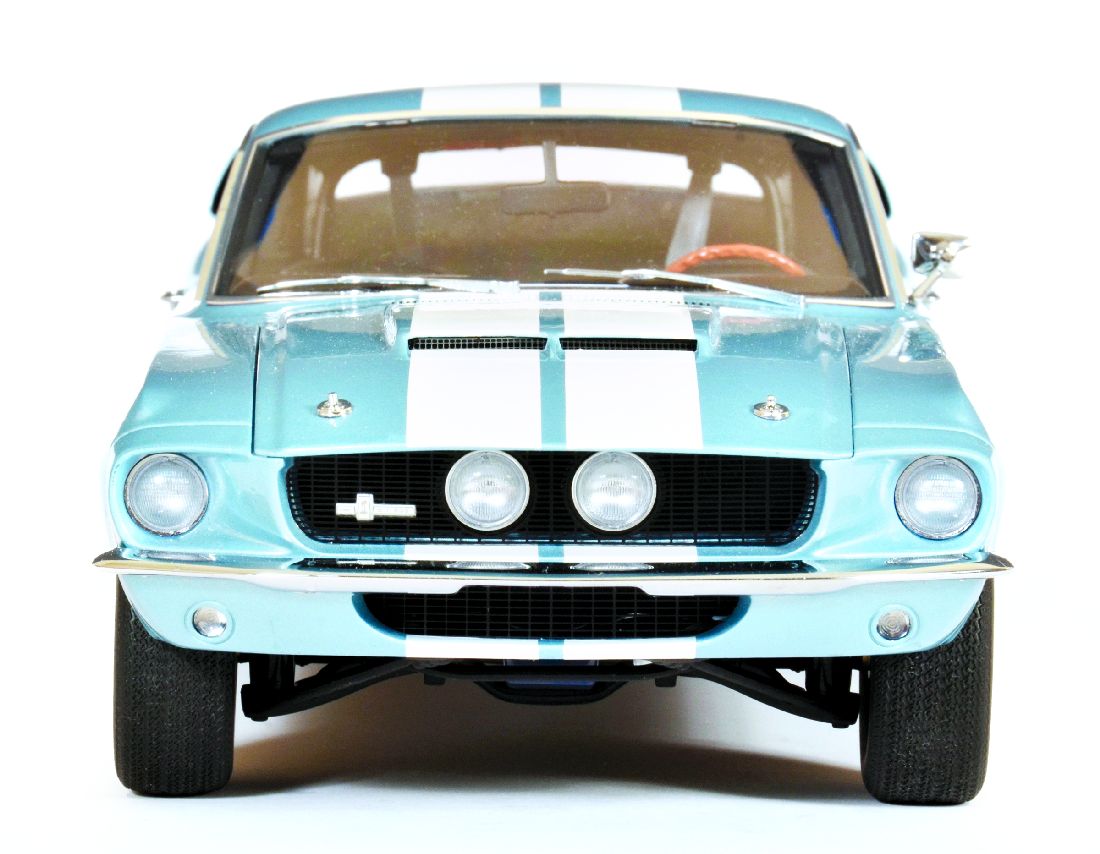 Last of the Breed

The 1967 model year marked the last time that Shelby-American actually built Ford Mustangs into Shelbys, and the resulting cars will always be remembered for their beauty and optional big-block engine punch. That punch is the reason many people consider the 1967 GT500 to be the best production Shelby ever made. And now, AUTOart’s ’67 Shelby GT500 may just be the best Shelby Mustang model ever made.

Shelby and the Blue Oval
Ford launched the “Total Performance” advertising campaign in the early 1960s to shine some of the company’s worldwide motor sports success on its products. “Win on Sunday, Sell on Monday” was the mantra; Ford cars and Ford-powered cars were racing and winning in rallying, endurance racing, sports car and drag racing. Ford even built special racing engines to be used in NASCAR, Formula One and Indy cars.
Carroll Shelby was one of the prime contractors in those days because of the great deal of success he’d had racing his Ford-powered Cobras and Cobra Daytona Coupes in the United States and in Europe. Henry Ford II (aka “Hank the Deuce”) challenged Shelby to turn the mild-mannered, Falcon-derived Mustang into a fire-breathing, street-legal performance car that could win in the Sports Car Club of America’s production class, racing against Chevrolet’s Corvette. Shelby took him up on the challenge, and the first cars out of the box were beasts. The 1965 Shelby GT350 and GT350R had no rear seats; this allowed them to be considered two-seat sports cars. Roll bars, suspension mods, racing gauge packages, a fiberglass hood and cooling scoops, a wood-rimmed steering wheel, and a 306-horsepower Hi-Po 289 cubic-inch engine with a special Cobra intake manifold completed the package. Ken Miles won the first outing at a track in Green Valley, TX, and the cars continued to win, driven by club enthusiasts and professional racers across the country.
The cars were fast, but a little uncivilized (okay, a lot uncivilized) for the typical daily driver. So for 1966, a few rough edges were removed from the GT350. Gone was the racing “R” package; if you wanted to go full-out comp, you had to do that yourself. It wasn’t a fluff job; Plexiglas quarter windows were installed in the “C” pillar and the suspension was softened, but the GT350 was still a thinly veiled race car for the street.

Curves Ahead
In 1967, the Shelby became a little rounder—think Sophia Loren versus Kate Moss—emerging a little longer, a tad wider and fuller overall. But the striking styling that attracted thousands to her was still there. Under Shelby’s eye, fiberglass pieces were added that refined that beauty: the nose was extended, and a ’glass hood with a broad scoop brought cool air into the engine bay. Two additional headlamps were mounted in the center of the widened front grille, and two scoops, somewhat reminiscent of the ones on the Le Mans-winning GT40 Mk II, were added to each side of the car behind the doors. A new rear fascia was added, with a molded-in duck-tail spoiler and sequential turn signals sourced from the Mercury Cougar. For an additional $200, there was an optional 428cid “Police Interceptor” engine, offering a conservatively rated 355 horsepower, thanks, in part, to dual 600 cfm Holley carbs on a Cobra manifold, and shifted either through a four-speed top-loader manual or a three-speed automatic. Power steering and power brakes were “mandatory options.” Air conditioning was now available, and so was the room to share your joy with three other passengers (and, of course, the roll bar). Racing stripes were dealer-installed, and some performance-minded customers even had their dealers swap out the 428 cube engines for the fussier, but race-bred Ford 427 V8.
The ’67 GT500 easily outsold the smaller 289-powered GT350; in September 1967, at the end of the ’67 production run, Ford turned manufacturing of Shelbys over to the A.O. Smith Company of Ionia, MI. As a result, from then on, Shelby-American’s involvement was in name only, making the Shelbys for 1968, 1969 and early 1970 more a premium-level trim package for the Mustang. By mid-’70, Shelby production was over.

A Beauty of a Beast
With that history in mind, many consider the 1967 Shelbys the last of the breed of true Shelby-American built and tuned Mustangs. AUTOart’s rendering of the ’67 GT500 celebrates that special car; it’s gorgeous, and available in both bright red with white stripes and a white-striped light metallic blue. The red is bold and aggressive, but somewhat overpowers the car’s beautiful shape, whereas the light metallic blue reflects light and allows the viewer to more closely appreciate the subtleties and shadowing of the style’s curves and folds.
It’s a wonderful execution. AUTOart is a master of getting bodies just right, and the overall shape, stance, panel fit, glazing, lensing, badging and trim pieces are just flat-out extraordinary, especially the finely turned twin chrome exhaust tips. They’ve also done something different with this GT500 as compared to other makers—they’ve left the windows rolled up. What fun. While you’re checking that out, open the doors; the leading edges neatly tuck inside the front fenders. No doglegs here … only on the trunk, and those mimic the 1:1’s.
The console-delete interior is neatly rendered with flocked carpeting, “GT500” rubber floor mats fore and aft, and a photo-etched, wood-trimmed Shelby three-spoke steering wheel. There’s a roll bar, seat belts with realistic inertia reels, and photo-etched sill plates, but the icing on the cake is a “genuine replica” 1:18 Carroll Shelby autograph on the glove box door. This looks like ol’ Shel actually crawled in and wrote it—just like the ones he happily puts on real rides, if the owner can wheel up to him at a show, or mails the glove box door to him. All Mr. Shelby asks in return for the autograph is a donation to his charity work.
Under the simulated fiberglass hood, the first things that catch the eye are a pair of beautiful little spring and scissor hinges that replicate the 1:1 units quite accurately. The engine between them is nicely done, though somewhat basic. It comes equipped much like the full-sized car did, wearing “sandblasted” castings for the valve covers, intake manifold and air cleaner. If the detailing on the body is 100% (and it is), the engine bay probably comes in around 75-80%. That’s pretty good, and while it’s certainly better than some of their prior engines, we’d call this a conscious marketing decision on AUTOart’s part. When the car is home in the display cabinet, or in its box on the shelf, the hood is most likely closed. Spending the production budget making the outside accurate and engaging makes sense; maybe trying to do the same under the hood would have impacted the targeted MSRP. The undercarriage follows the same course; detailing is essentially all molded in, or simply isn’t present. What’s left certainly gets the job done, but doesn’t overwhelm the viewer like the topside of the model does.

Pony Up
That topside is outstanding. Overall, this is a beautiful car; arguably, the most nicely executed Shelby on the market, particularly with the light blue metallic paint. AUTOart has put a lot of effort into getting the important things up on the “sunny side” of the car just right, and it shows. On display, this one more than does the job. And while the engine isn’t up to the same standard as the rest of the car, they’ve made some strides in the positive direction, and it’s no deal breaker.
The real car had punch. This model packs a big wallop of its own—and it comes highly recommended. 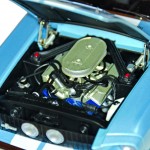 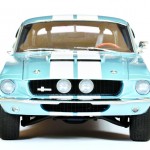 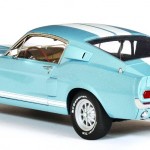 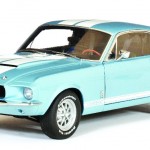 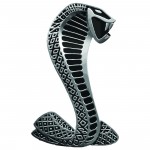 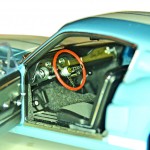 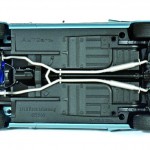