Everyone knows the Jeep. It’s one of the most recognizable vehicles in history, and it is rightly credited for its significant role in helping win World War II, with its unprecedented versatility and toughness. Gen. George Marshall (U.S. Army Chief of Staff during WW II and architect of the Marshall Plan) went so far as to declare it “America’s greatest contribution to modern warfare.” Consumer evolutions of the Jeep continue to be hugely popular even today, and the model we now refer to as the “Wrangler” has changed remarkably little considering it’s been 78 years since the first Willys MB entered service.

If you do the math, you will note that the Jeep’s arrival actually preceded U.S. involvement in the war by a few months. The U.S. Army had been contemplating a versatile light utility vehicle since just after WW I. When war broke out again in Europe in 1939, the need became more urgent. In early 1940, the Army formalized its requirements for a 1/4-ton 4X4 light reconnaissance vehicle that could carry a crew of three and 660 pounds of payload. Three manufacturers replied with serious bids: Bantam, Ford, and Willys-Overland. Only Bantam met the Army’s extremely demanding deadline for a working prototype within 50 days, so initially it was awarded the contract. But it soon became apparent that Bantam did not have the production capacity to meet demand, so Willys and Ford were also awarded contracts to build their designs.

Ultimately, the Army sought to standardize them, and Willys’ Military Model A (MA) won out for its low cost and powerful L134 “Go Devil” 2.2L 4-cylinder engine. The Army made some revisions, resulting in the MB—the Jeep the world has come to know and love—with one notable exception. To meet production quotas, both Willys and Ford built MBs (Ford under license with the designation “GPW”—for “Government Production—Willys”). Willys used a grille of welded iron slats, but it was heavy—and expensive. Ford replaced it with a simpler, stamped-steel panel with nine vertical grille slots, which Willys adopted after 25,000 slat-grille models had been built.

Auto World’s model, the first 1:18 in its Greatest Generation series, has the stamped grille, which would make it either a Ford GPW or a Willys MB built after April 1942, despite the fact that the company markets it as a 1941 Willys in some places. Either way, it is a remarkably faithful scale rendition—at a price so affordable that we initially thought it was a typo, but the things that made the original Willys Jeep so affordable also work in the model’s favor. It is compact, riding on just an 80-inch wheelbase, and military vehicles have no need for trim. Couple that with some strategic use of plastic for peripherals (the body is diecast metal) and Auto World is able to bring it to market at just $34—an outrageous bargain! 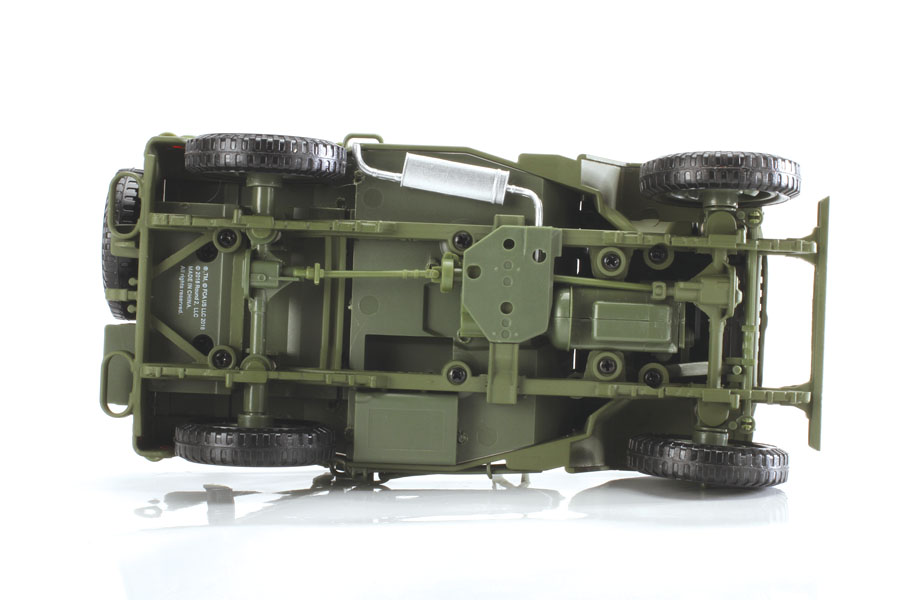 The chassis detail on this model is outstanding, with separately molded frame, axles, and transfer case. 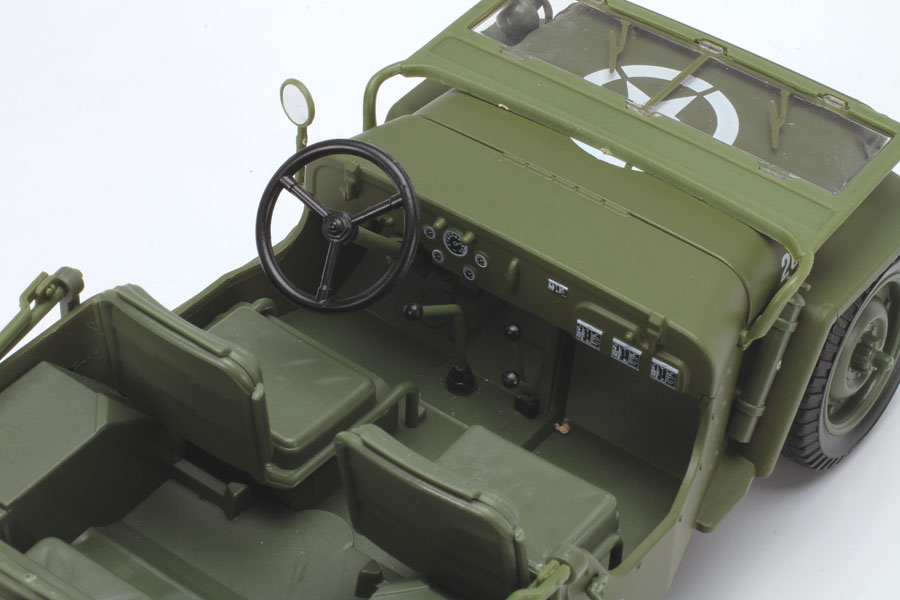 The windscreen folds down, and the detail on the seats, dash, and gear levers is really good, especially for this model’s extremely affordable price.

The detail is really good. The windshield folds down authentically, and the hood opens to reveal a surprisingly convincing version of the Go Devil inline-4, with a number of separately molded and painted parts. The chassis is even better. The ladder frame, axles, and transfer case are all separately molded, and the suspension even has functional springs. There are some exposed screws and the wheels could be a little tighter on the hubs, but that’s about it for any downsides.

Auto World currently offers the Willys Jeep in this olive drab Military Police version and a blue-gray Navy version, but potential for variations with this basic casting is nearly infinite—we can’t wait to see where Auto World takes it! And at this price, virtually everyone will be able to afford to collect variations as they come out. In the meantime, get yourself one of these first Willys Jeeps; you’re not going to find a better value in the military vehicle segment. 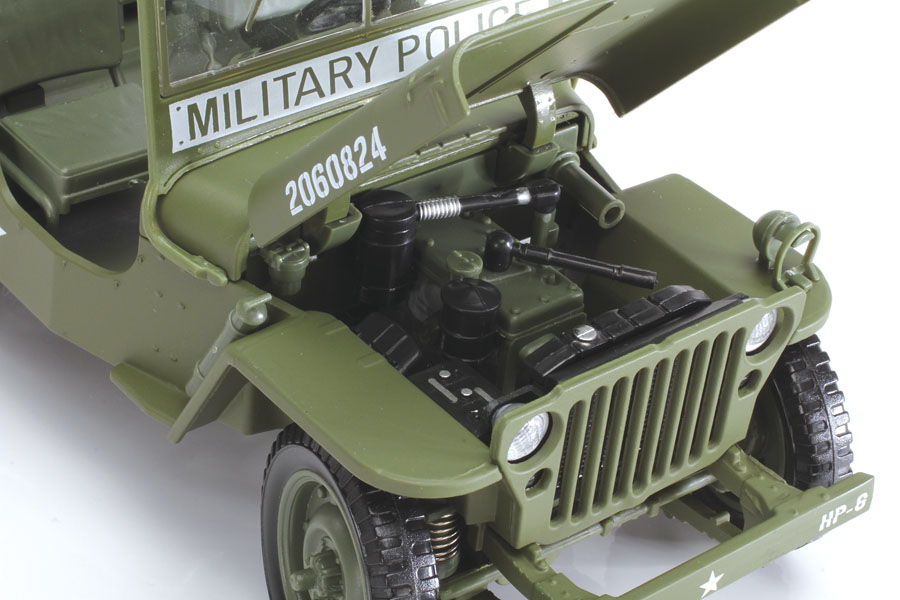 The Willys “Go Devil” 2.2L inline-4 was significantly more powerful and durable than the Ford powerplant, which ultimately helped the Willys get selected. Molded and painted plumbing livens up the engine compartment a lot. 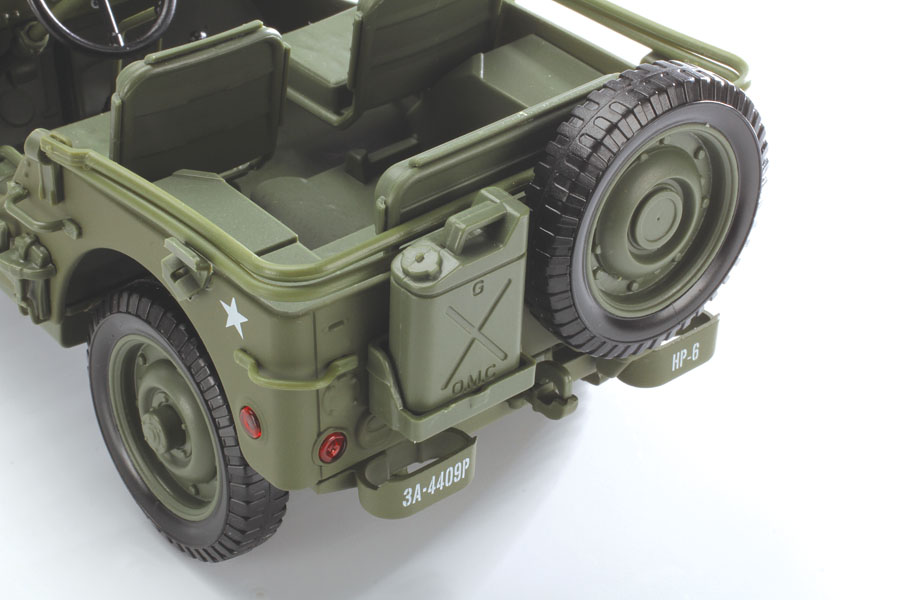 Most of the add-ons—the jerrycan, hand tools, mirrors, and grab handles—are separately molded plastic. They do the job and look good.