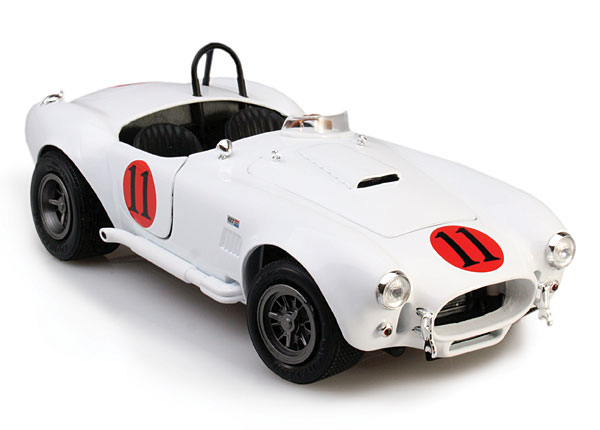 Comedian Eddie Murphy (yes, he used to be a comic) once did a bit about Elvis Presley’s string of campy (though hugely successful) movies. Elvis’ scriptwriters were never too taxed; whether The King’s character  was a pilot, a cowboy, or a hitchhiking hobo (we’re not kidding), it was never long before Elvis was hip-swiveling and strumming his way through a flotilla of girls batting their Maybelline-d eyes. Murphy’s take was spot on. So is this model of the star car from Presley’s 1966 less-than-epic grinder Spinout, in which Elvis was cast as Mike McCoy, a traveling entertainer and part-time race driver who tows his 427 Cobra from place to place behind a 1929 Model J Duesy. Getting dizzy, yet? The mold set is an Ertl-sourced big block Cobra that has emerged from the wayback machine with dog-leg hinges on its opening doors and hood, steerable wheels, and a pinpoint-correct livery for the movie machine. Done in white with red meatballs and rolling on correct magnesium-colored Halibrands at all four corners, the visible casting lines at the rear are a tipoff to the mold’s age, but the piece is otherwise built and finished off well. The car has a moderately detailed interior, a neat, vinyl-wired engine, and a well-done chassis, too, all of which arrive in a box decorated with a reproduction of the movie poster and a few stills from the film. Taken in the context of its intended audience, this one’s going to be a hit. Uh huh. – Joe Kelly, Jr.