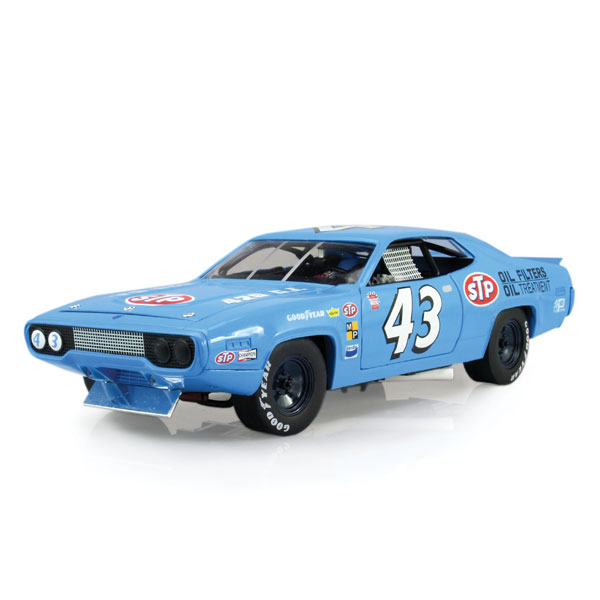 Richard Petty lost his Chrysler Corp sponsorship after the 1971 season, so STP president Andy Granatelli reached out and offered to pour STP money into King Richard’s team finances for 1972 — with the caveat being that Petty’s car would no longer wear its distinctive blue color, toting STP’s red instead. Petty said “no” — or some Petty version of same — which instigated an intense few hours of negotiation. They finally agreed on what would ultimately be a fifty/fifty split. There wasn’t time to get Petty’s car painted before the Riverside opener, so the 1972 Plymouth Roadrunner, in Petty Blue, wore STP roundels on its nose and fenders. This Auto World 1:18 replicates the race car as it appeared that day, based on an older Ertl mold set with “welded shut” doors and an opening hood and trunk. It’s an old-school casting, but a good looking one; with the exception of a couple of details, like the wheels, which should be slotted, and the marker lights, which should be gone, it’s a neat piece with a wired engine and decently done race interior. Yes, the spare should be removed, and it’s doubtful that Petty’s car kept the “meep meep” horn that’s under this one’s hood on race day, but overall, for Petty fans, this is a memento of a new chapter in Petty’s life – and that makes it a must-have. Send one to Danica.  – Joe Kelly, Jr.