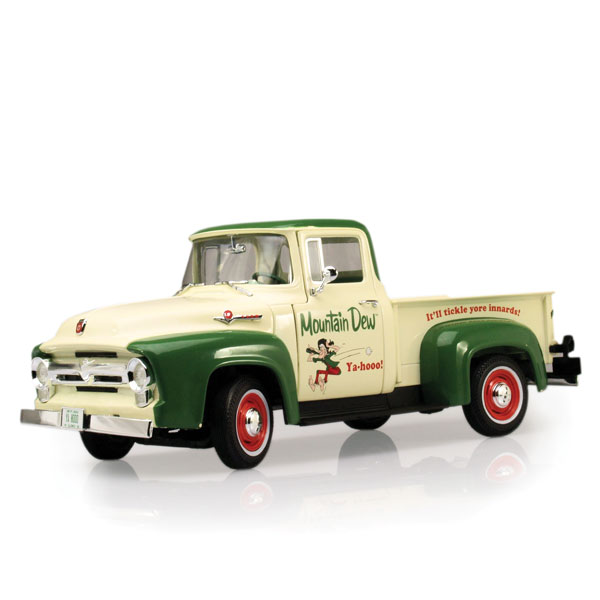 Auto World’s re-pop of this old Ertl mold is a true attention getter – exactly what the owners of the real hauler might have hoped for. Back in the ‘fifties, Mountain Dew was a big part of the soda market in the Southern U.S., originating in 1940 with a formula stirred up by Barney and Ally Hartman; Pepsico bought the brand and made it national in 1964. These days, the brand represents well over a dozen different flavors around the globe. Much the same could be said for Auto World, which continues to impress us with old Ertl mold sets given new life; we parked this one next to an original American Muscle version built in 1998, and the difference in quality, especially in the paint and finish categories, is remarkable. Where the original used a lot of unfinished plastic under its hood, in its cabin, and on its chassis, virtually every bit of the AW truck has been painted up and put together – and better. The chrome is deep, as is the paint, and the “Mountain Dew” markings – including a set of wince-inducing “It’ll Tickle Yore Innards” slogans – is sharp and period correct. Above natty whitewall tires and red painted rims, the doors and hood open, the tailgate swings down, and the wheels steer; the box is specially decorated, too. Much like the taste of Mountain Dew, this one grows on you. Ya-hooo.  – Joe Kelly, Jr.