Hard as it may be to fathom now, the Ecto-1—automotive star of Ghostbusters, one of the most beloved movie franchises of the 1980s—was slated to be played by a completely different car until the very last minute. In the script, cowritten by Harold Ramis (“Egon”) and certified car guy Dan Aykroyd (“Ray”), Aykroyd originally specified a 1975 Cadillac ambulance painted black. Thankfully, director of photography László Kovács pointed out that a black car would not photograph well in the night scene that is the Ecto-1’s debut. The stylized white-and-red ambulance filmed beautifully at night (although it’s fun to note that, in the car’s brief pre-Ecto introduction scene, it wears black with primer spots—in line with Aykroyd’s original concept). And of course, the refrigerator-box-on-wheels ’75 was discarded in favor of a model from Cadillac’s most flamboyant year: 1959. Design for the Ecto-1’s ghostbusting hardware fell to production designer Stephen Dane, who also came up with the look for the boys’ proton packs and other gear.

The guys at Auto World have a lot to cover with the Ecto-1, starting with its sheer size. Based on a Fleetwood Series ’75 chassis, the car stretches out more than 20 feet! To make it more manageable, the company produced it in 1:21 rather than traditional 1:18; even so, it is longer than most 1:18 models. The paint and trim are correct; most of the brightwork, including the strakes on the front fenders and the speerlike taillight trim, is reproduced with molded and chromed pieces. The window trim is painted, and it is more of a satin finish than of chrome. The roof rack is great; all the crazy pseudoscientific gear from the movie is represented. On the left, we’ve got a couple of containers that could be oxygen tanks or fire extinguishers. Is that a shotgun microphone on the pylon above? Behind it is what appears to be a mini dome antenna. A pair of corrugated hoses snake down from a technical-looking box into ports in the fender just above the tire. On the reverse side, we’ve got a ladder and what could be the tank for an acetylene torch. Aside from rungs that are a little thicker than those of the movie car, everything looks pretty much spot-on.

The front doors and rear tailgate open, but the rear doors are fixed. The interior is fairly well represented, although it looks pretty much stock. The rear cargo area is more interesting—there’s a computer screen and some equipment of indeterminate function—but sadly, there’s no sign of the proton backpacks. The hood opens too, and underneath sits a nicely detailed representation of the Caddy’s stock 390ci V-8. It looks pretty cherry, so clearly Ray was able to get the needed new rings and a little wiring done. When you flip the Ecto-1 over to look at the chassis, you can see that he got the mufflers, suspension, transmission, and rear end work done as well! The hubcaps are just slightly too deep-dished (they look like the ones used on the Ecto-1a in Ghostbusters II, actually), but otherwise the wheels and tires look right. And Auto World even tosses in a figure of Slimer as a perk! 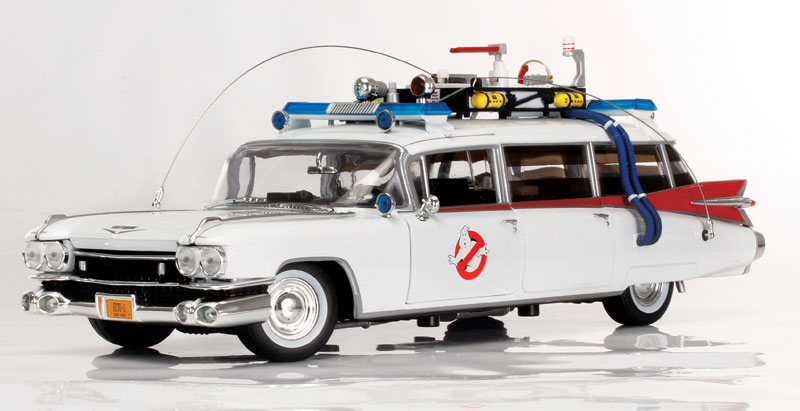 The Cadillac 390 V-8 has lots of scale detail. Check out the casting on the elaborate ’59 Fleetwood front fascia. 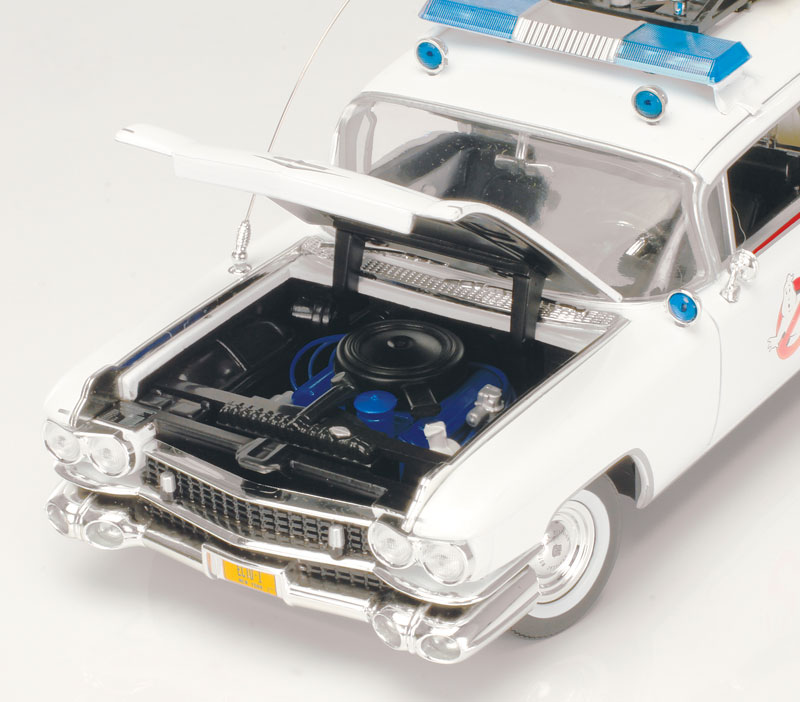 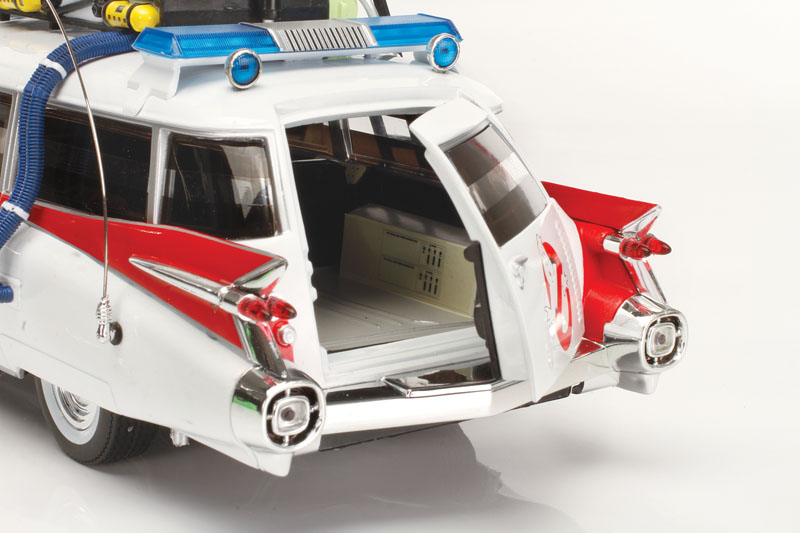 The front doors and tailgate door both open. In back, you get some fun movie-tech ghostbusting gear, and even more up top.

Ghostbusters is one of those movies that was just right for its time. It’s good-natured fun that has aged remarkably well. The script has the perfect balance of silly and smart, and you won’t find a more charismatic ensemble cast, including the 4-wheeled cast member. Ecto-1 takes us back and makes us smile—that alone is worth the price of admission. That it happens to be so authentically rendered is a welcome bonus.