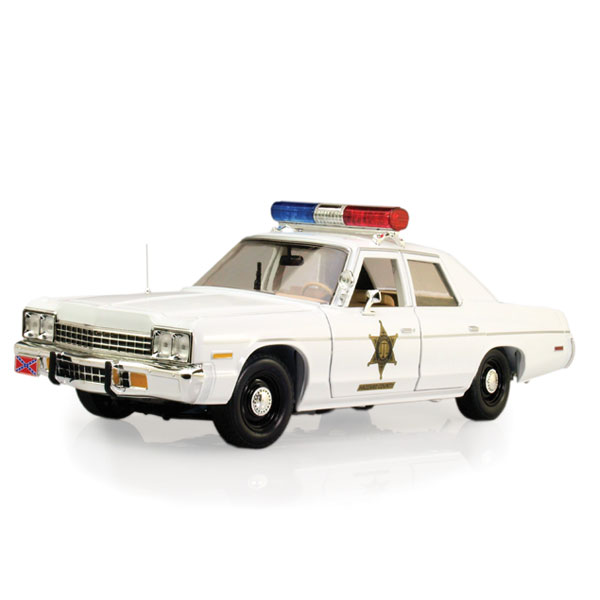 The Dukes of Hazzard television show that ran from 1979 to 1985 wasn’t exactly a paragon of support for traffic safety (or the preservation of Dodge Chargers). But it was a fun show to watch, especially when the Duke boys were being chased by Sheriff Rosco Coltrane (James Best) with his lights blazing and siren at full tilt. Of course, old Rosco never could catch those boys, and his cruiser frequently caught the brunt of misfortune — sometimes several times in a single episode. That might explain why there were so many different police cars used in the series, among them this Dodge Monaco as seen in the pilot episode and the show’s credits. This is one of the larger models we’ve seen recently, and Auto World has done the car well, with opening doors, hood, and trunk, an opening hood, steerable wheels, and all the correct decorations to match the fleeting images of the TV cruiser. The interior’s cool, too, right to the shotgun clamped to the dash, and the wired 440 Magnum V8 is neatly painted and put up. So is the chassis, which has a faux overspray pattern and a lot of separate, painted elements. Good stuff.  — Joe Kelly, Jr.