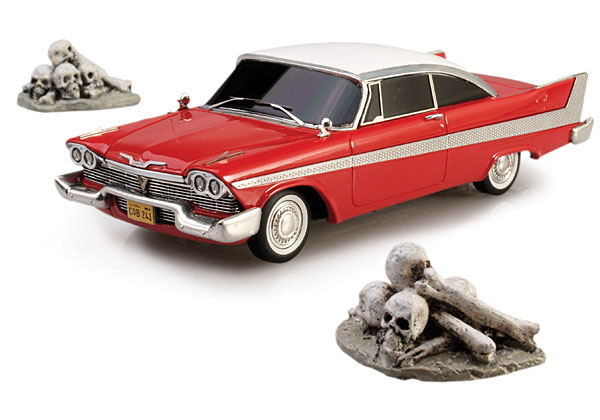 While Michael and K.I.T.T. were tearing up the Universal back lot, author Stephen King was penning a missive about a massive old Plymouth that came off the assembly line populated by more spooks than a Hallowe’en hayride. That novel – Christine – eventually made it to the big screen in one of the better-realized efforts from King’s creepy catalog. A while back, Auto World did a re-release of the old Ertl/Joyride 1:18 diecast of the car, and now, they’re adding this exceptionally well-done resincast. Pardon us if we say that this thing is killer; the quality of the piece is obvious, with a slick red and white paint job (yes,  incorrect for a 1958 Fury, but accurate to the film car) that covers a perfectly proportioned body. Real lenses are at each end, and the smoked windows — as seen on film when the car was in attack mode — are trimmed out in a mix of carefully cast resin and photo-etched metal. More processed steel is used to replicate the Fury’s golden side spear — a little flat, but nicely textured —  and the model’s wipers, fender-top trim, hood badge, and cowl vent are also acid-dipped. One of the coolest details — intentional or not — is the slightly dulled, hyper-realistic sheen on the bumpers; too many 1:43 models wear the same chrome wattage as much larger replicas. This one just looks real — and full-interior variants are on deck for later in 2014.  — DCX Staff