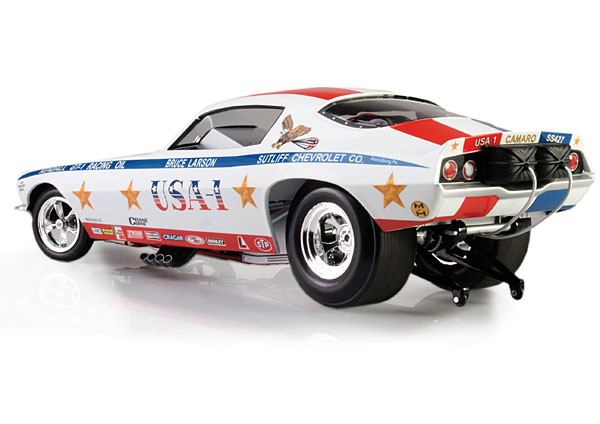 Speaking of the Legends series, this 1970s-vintage Camaro represents the bow-tie contingent as Bruce Larson’s particularly patriotic “USA-1” funny – one of the prettier cars Larson ran in his career, and, thanks to its Hemi engine and sleek shape, one that kept him running and winning match races in the early ’70s, despite the lack of a major corporate sponsor. The decos on the model match perfectly to a few in-action shots we found (some of which showed alarming, full-flame burnouts), and the livery – including a high end grouping of tamped-on sponsor logos, all sealed under a piano-smooth clear coat – makes the car a great adjunct to the ever-growing Legends set. Our  favorite business, topside, is the beautiful metallic in the blue stripes – a great, and authentic contrast to the rest of the colors on the car; underneath, it’s that same, well-done funny chassis that’s rolled under nigh on all of the Legends of the Quarter Mile cars, done here in a correct red. Here’s our greatest hope: that the success of this line will allow AW to break out some new bodies (which they are – stay tuned), and drill down even deeper into one of the greatest eras in drag car history. We’ll be waiting.  — Joe Kelly, Jr.