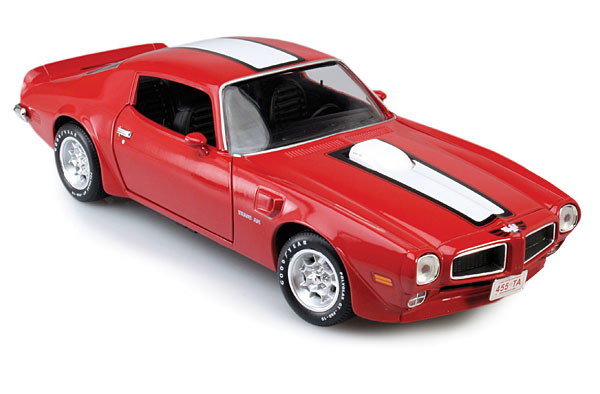 Back in the good old days of mass-market, twenty-buck  large-scale diecasts, the Ertl company ruled the roost with nice-looking replicas of popular muscle cars. In 1995 they debuted one of their best ever — a 1970 Pontiac Trans Am — and that mold still looks as good now as it did back then. When considering Auto World’s latest use of the tool, we’d go so far as to say that it’s never looked this good – thanks to some very nice detailing and greatly improved assembly and paint. Seen here as a 1972 T/A in Cardinal Red with white and black stripes and a black interior, rolling on great honeycomb wheels, Auto World’s variant surpasses the older versions on a lot of levels. Some of that is because these guys are bolting the cars together a whole lot better than Ertl ever did — and the balance of the boost is the result of some added bits and details, like the flexible vinyl wires on the 455 HO engine (replete with painted block, and surrounded by lots of little hand-picked paint details — a nice touch), a carpeted and fully painted interior, and the finessing of the castings around the grille. Little things do mean a lot, here, and the painted headliner and more aggressively decorated chassis — though built from the exact same castings as the original release, almost twenty years ago – pop a whole lot more. Only one more detail might have blasted this one into a higher level of wow – matching the chrome framework for the windshield and backlight by detailing the trim around the door glass openings with some thin chrome, and some black for the window seals. Still, for fans of the Firebird – and for the good work Auto World is doing these days – this one is hard to pass up.  — Joe Kelly, Jr.