Raise a Toast to the Six Pack! 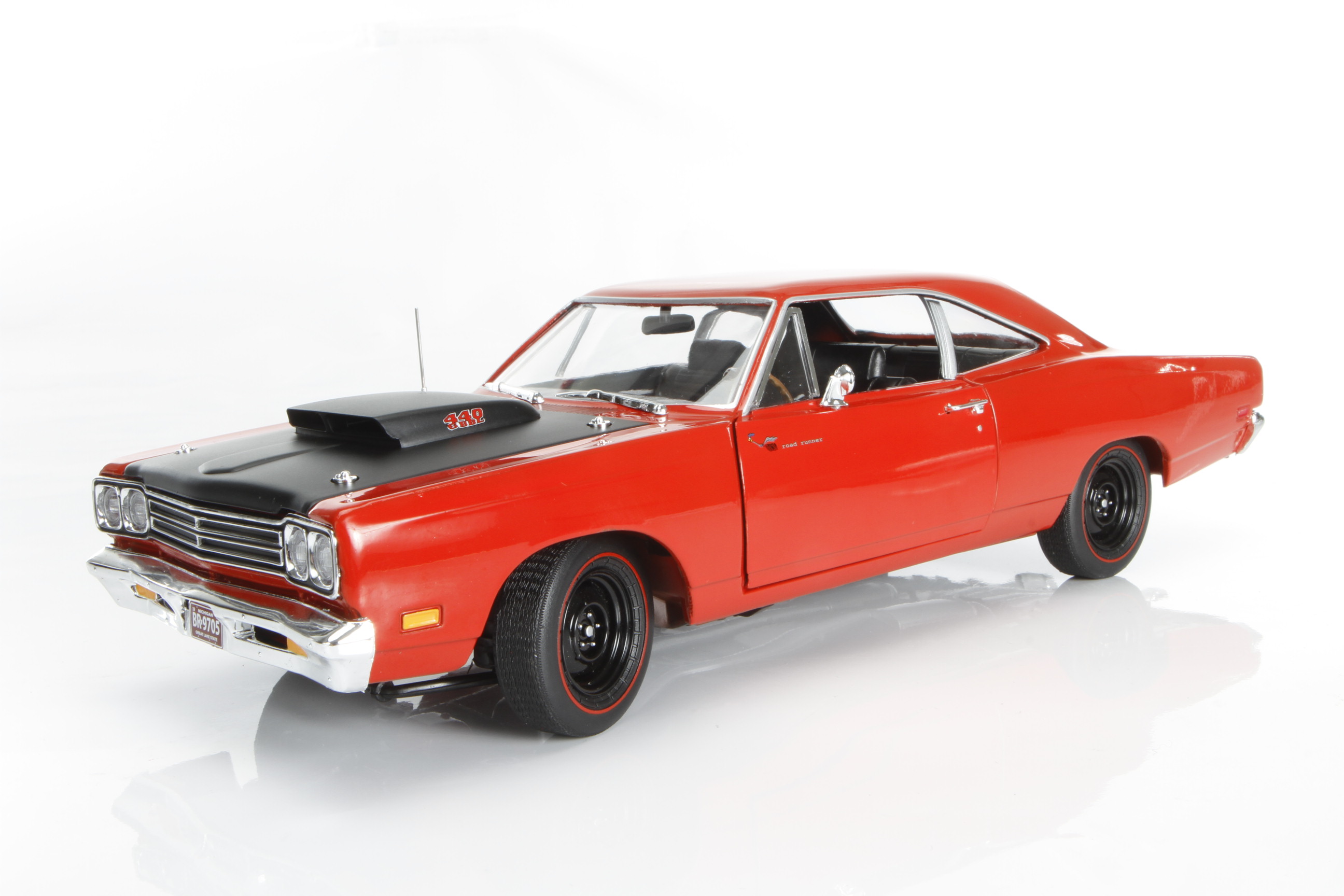 How ironic is it that perhaps the greatest competitor to Mopar’s mighty 426 Hemi ended up being…another Mopar! In the late 1960s the Hemi was dominant on street and strip, but it was expensive—the $800+ it cost added a 25-percent premium to the price of some models! And it could be temperamental if not tuned regularly and well. A less-expensive, less high-maintenance alternative to the Hemi was needed to energize the budget-conscious performance market. The 440 Magnum introduced in 1967 was a good starting point, but it was felt that the power disparity between it and the Hemi (quoted at 50hp, but in reality it was more like 80!) was just too large. So Chrysler’s performance engineers set about creating something to fill the gap. 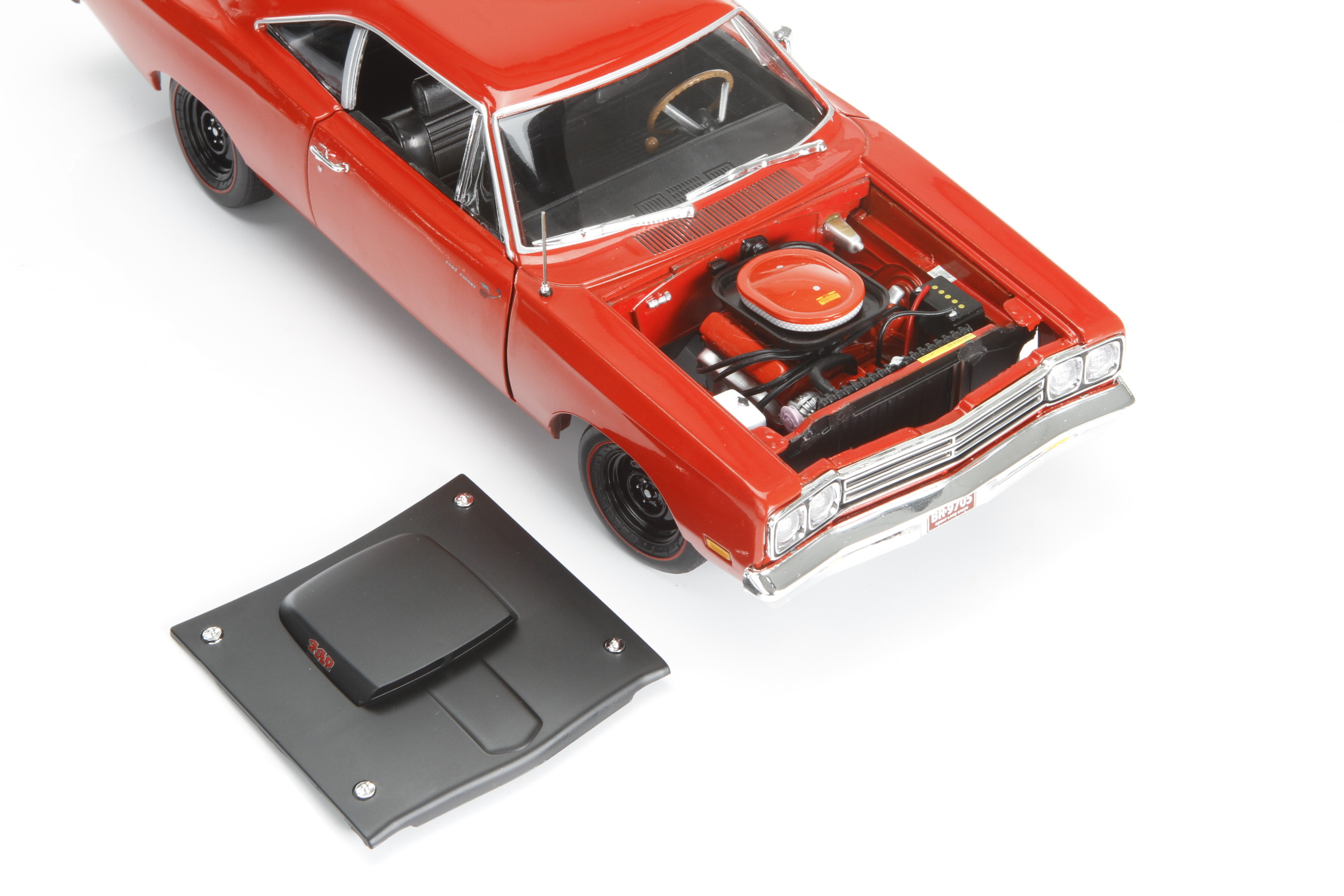 In February 1969 they released a hotter version of the 440 with a host of features geared at giving the famously torquey B-Block more top end. Central to that effort was all-new triple Holley 2-barrel carburation mounted on a unique aluminum Edelbrock high-rise intake manifold. To that was added a shot peened crank and a sturdier valvetrain. It was produced by both Plymouth and Dodge, but only in the intermediate Road Runner/Super Bee platform as a 1969 ½ model under code A12. That got you the beefed up 440 (notoriously underrated at 390hp) for half the cost of a Hemi. The package also came with Hemi-spec transmissions (4-speed or Torqueflite auto) dishing to Chrysler’s brawniest axle, a Dana 60 Sure-grip with 4.10 gears—the preferred drag-racing setup. To put down the extra grunt the A12 (called the ‘440 6bbl’ as a Road Runner and ‘440 Six Pack’ as a Super Bee, though the latter moniker became the unofficial nickname for all) came equipped with Chrysler’s widest tires: G70s on special 15-inch steel wheels (Hemis got only F70s). A12s weren’t bashful about announcing their firepower—a special flat black fiberglass lift-off hood with a giant hood scoop emblazoned with jumbo engine graphics. 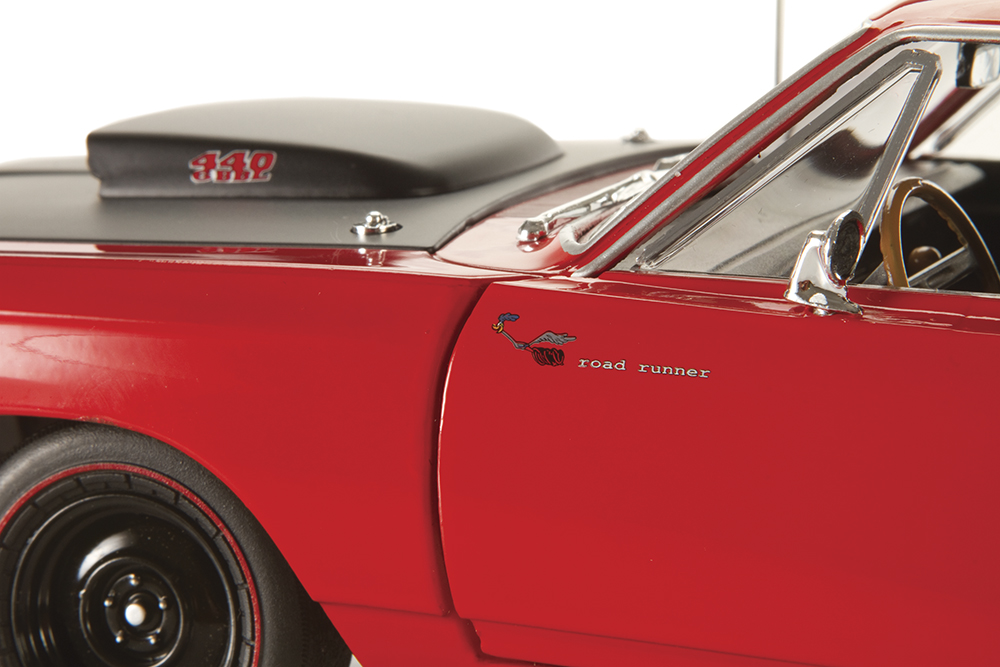 Auto World has just released this Road Runner 440 6bbl in bright R4 (Charger) Red with a 4-speed. Interestingly, Auto World has chosen to do it as a pillared coupe (VIN code RM21) rather than the more common pillarless hardtop (RM23). The coupes were based on the lower-priced Belvedere, while the hardtops were based on more upscale Satellites. The latter are much more common in diecast, so the coupe is a refreshing option for collectors. This is an update of the familiar American Muscle Road Runner/GTX casting; the basic shape is very accurate, but it shows its age around the panel gaps and painted-on window trim. The pillar is molded into the quarter window—necessary since the tooling was developed for the hardtop. That makes the alignment with the door a challenge, but the paint is nice and even. The graphics are sharp too—the “440 6bbl” on the hood scoop as well as the Warner Bros. Road Runner cartoon character below the A-pillar and on the rear valence.

Swing open the door to view the epitome of budget performance. The A12 features a plain vinyl bench seat (rendered here in hard plastic) and a long, double-curved gear lever for the 4-speed that sprouts up directly out of the transmission tunnel. It’s the kind of item you’d expect in a tractor, not a performance car—but that’s how Plymouth delivered them! Oddly, there is no corresponding clutch pedal—or brake or accelerator pedals for that matter. Perhaps they got covered over when the flocked carpeting was installed? The dashboard has been upgraded with a nicely legible decal depicting the instrument panel. A quilt-pattern trunk mat dresses up the trunk, along with a full spare. 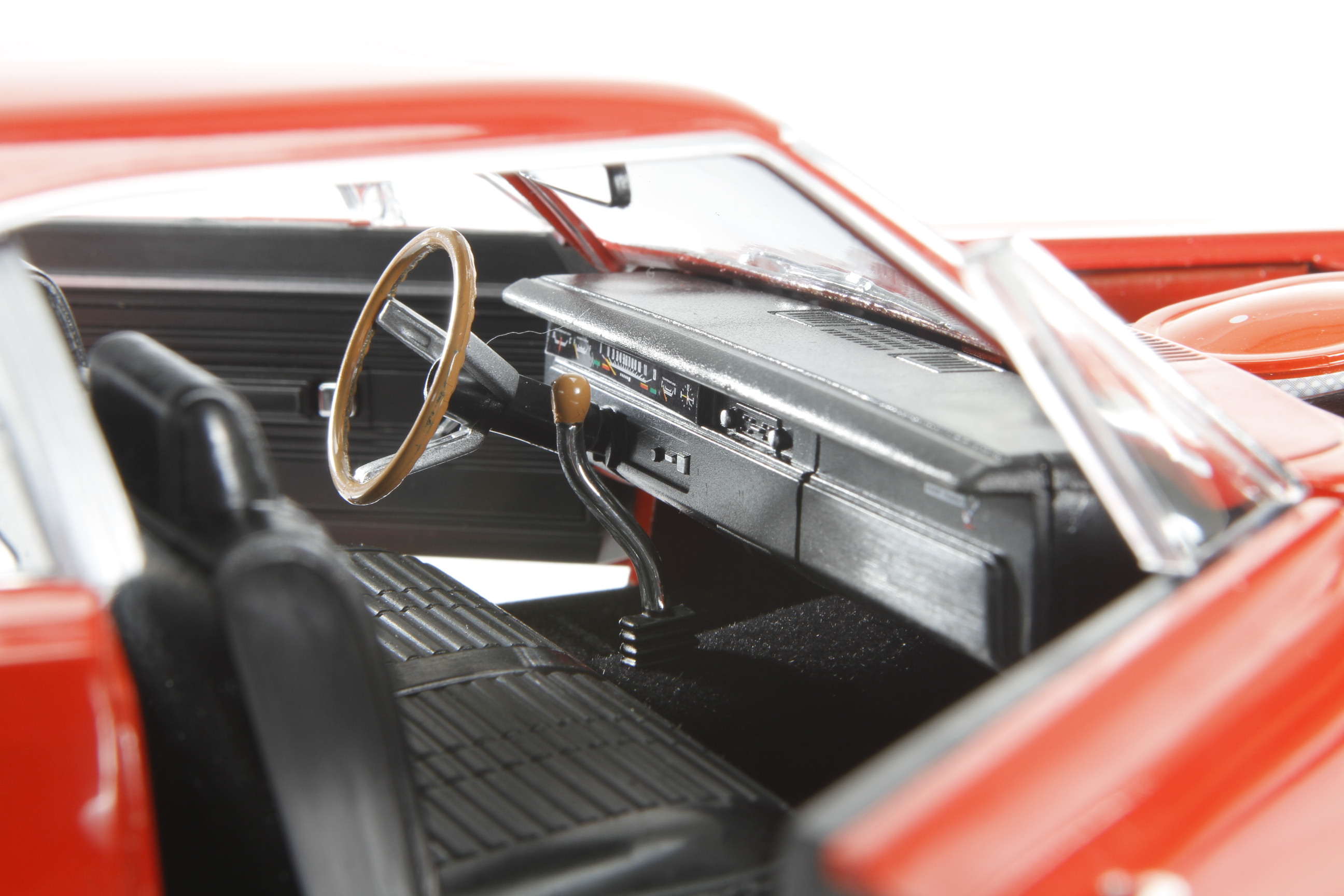 The composite hood lifts off rather than up on hinges. It is retained by molded clips rather than the hoodpins, so it takes a firm tug to remove. The fit is good, especially for plastic—certainly better than the notoriously ill-fitting full-scale ones! Beneath is an excellent rendition of the engine that made this package and inspired a cult following that continues to this day. Auto World spent considerable attention on its 440 Six Pack, decorating it not only with the proper paints—orange for the engine itself, and semi-gloss metallic for the exhaust manifolds and transmission bell housing—but all the peripheral details as well: plug wires, battery cables, coolant hoses and a sprinkling of warning labels and decals. 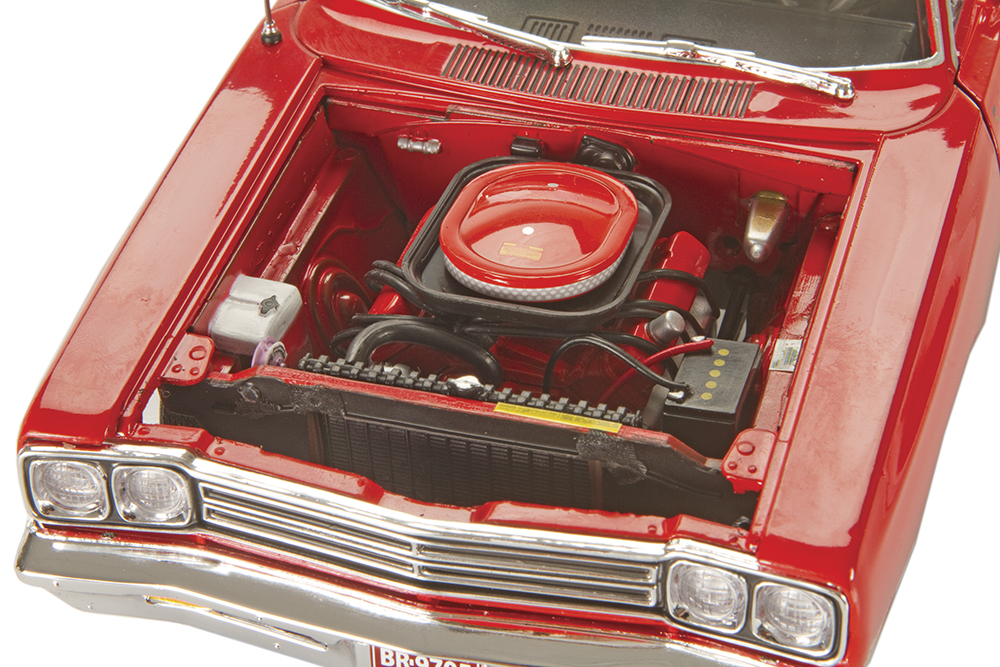 Much of the appeal of the appeal of the A12 Road Runner is its single-minded dedication to speed—something exemplified by its rolling stock. The G70 redline tires came mounted on 6-inch-wide plain steel wheels painted black and without hubcaps. The only slight concession to cosmetic appeal was the addition of chrome lug nuts! The model captures these features nicely. There is decent detail on the chassis and suspension as well, including paint overspray and a properly painted full exhaust system. 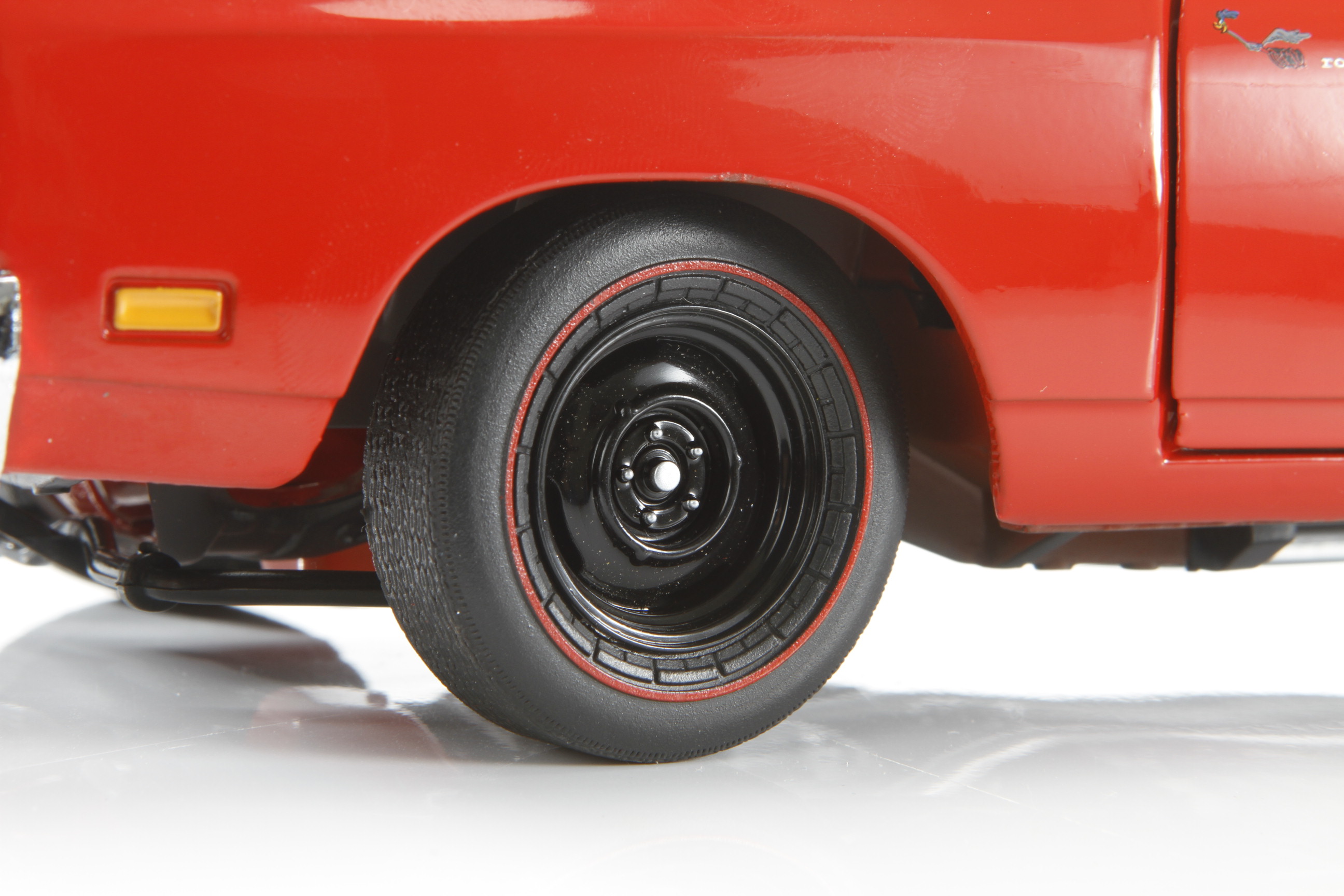 The 440 Six Pack quickly carved out a cult following for itself, and its speed spawned a fierce inter-Mopar rivalry between it and the Hemi which lives to this day. Objectively it wasn’t quite as fast as a well-tuned and driven Hemi, but it was much easier to maintain and drive. That meant that less-than-expert drivers might well go faster in the more forgiving Six Pack—and save $400+ to boot! 1412 Road Runner buyers saw the appeal in that proposition; it might have been more, but Edelbrock’s lack of production capacity limited the Six Pack Road Runner to 797 hardtops and just 615 coupes in 1969, making them highly prized by collectors as well. Diecast collectors will prize Auto World’s model for its clean casting, engine detail, and for being a pillar car rather than the much more frequently modeled hardtop. 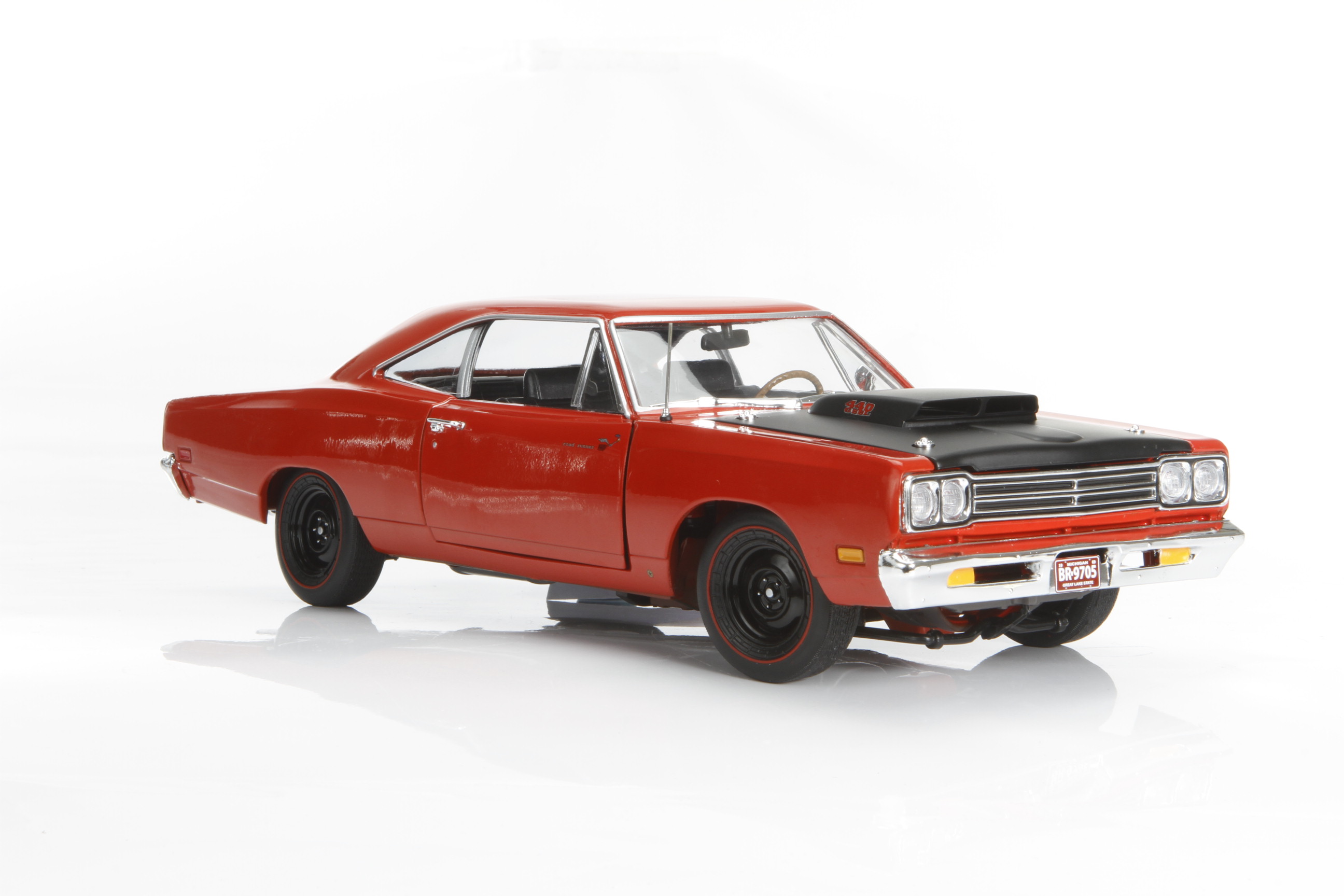