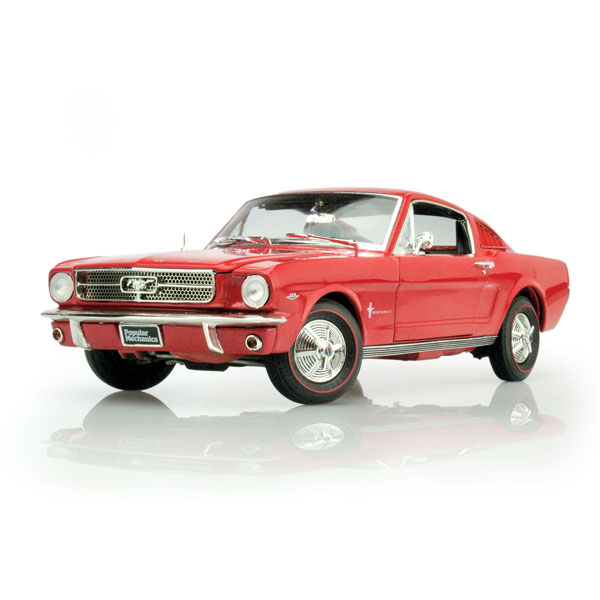 Thirteen years after the original 1:18 Ertl/FoMoCo “Precision 100” 64 1/2 Ford Mustang convertible shook up the diecast collecting world, the current owner of the molds, Auto World, is releasing this 2+2 fastback pony in the same color — Rangoon Red — with many of the original’s operating features, including opening doors, hood, and trunk (on real aspect hinges); a carpeted interior with tilting front seats, working visors, and a fold-down rear seat; working suspension and steering, a rotating drive shaft, and an up-down radio antenna.  The paint and finish on the car are very good, and even though the chromed bits aren’t done with the same pricey electro-plating process the original P-100s wore, the overall job is right for the price — as is the packaging, which nixes the clamshell/sleeve delivery the older car enjoyed, in favor of a three-window display box. That box is part of this release’s “hook” — it features the cover of the January 1965 issue of Popular Mechanics, boasting a Rangoon Red fastback kicking up its heels (alongside a ’65 Plymouth Barracuda and a contemporary Chevrolet Corvair). The model attempts — and succeeds — in replicating that cover car, right down to the red stripe performance rubber.  The box also affords a look at the scaled ’Stang’s neat chassis — done with faux “factory” overspray on its red oxide base — as well as offering up a gander at the model’s photo-etched grille and galloping mascot. This pony still delivers. — Joe Kelly, Jr.