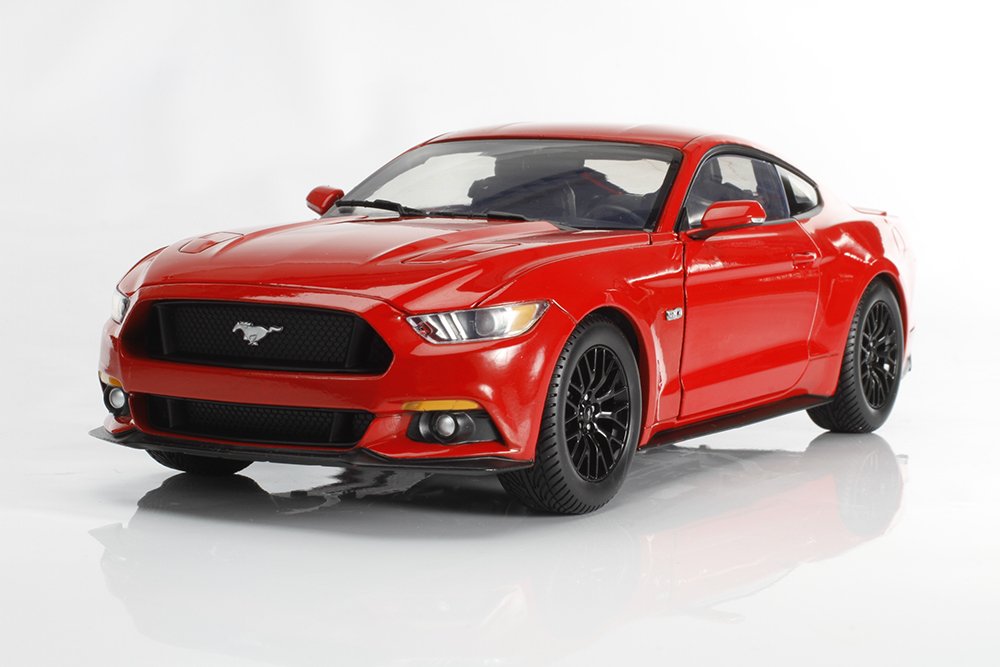 A Five-Liter Fountain of Youth 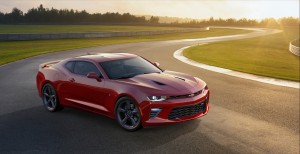 Buzz about the forthcoming 2016 Camaro has threatened to steal a bit of the new Mustang’s thunder. 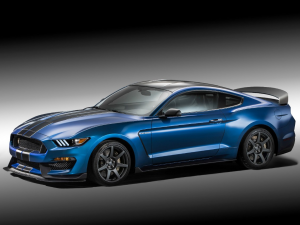 Meanwhile, Ford fans are fixated on next year’s Shelby.

The automotive media is all aflutter these days with the news of the forthcoming 2016 6th-generation Camaro. The announcement has overshadowed the 6th iteration of the Mustang—which beat the Chevy to market by nearly two years. After all, the pony-car paparazzi are perpetually a “what have you done for me lately” bunch. Even Ford fans are mostly focused on the upcoming revival of the vaunted Shelby GT350 nameplate.

Add to that the fact that new Mustangs are now starting to show up in parking lots and driveways around the nation, so hype and anticipation has given way to familiarity and even a certain degree of ambivalence. This does tremendous disservice to Ford’s foundational pony car—the latest incarnation of which is without question the best all-around automobile ever to carry the galloping stallion emblem. And it’s not just the best all-around Mustang ever; it’s one of the best performance bargains available anywhere. The base model V6 runs wheel to wheel with Cobra R from 20 years ago! There’s a turbocharged 4-cylinder option with 310hp and almost unlimited tuning potential. But this is the Mustang we’re talking about; the V8-powered GT is the motor that matters. And the latest version of Ford’s “Coyote” 5.0L boasts 435hp. Add to that handling refinement that rivals European performance coupes costing twice what a ‘Stang does, stellar build-quality, and killer styling and we have one for the ages. Well worth the diecast tribute Auto World has produced here. 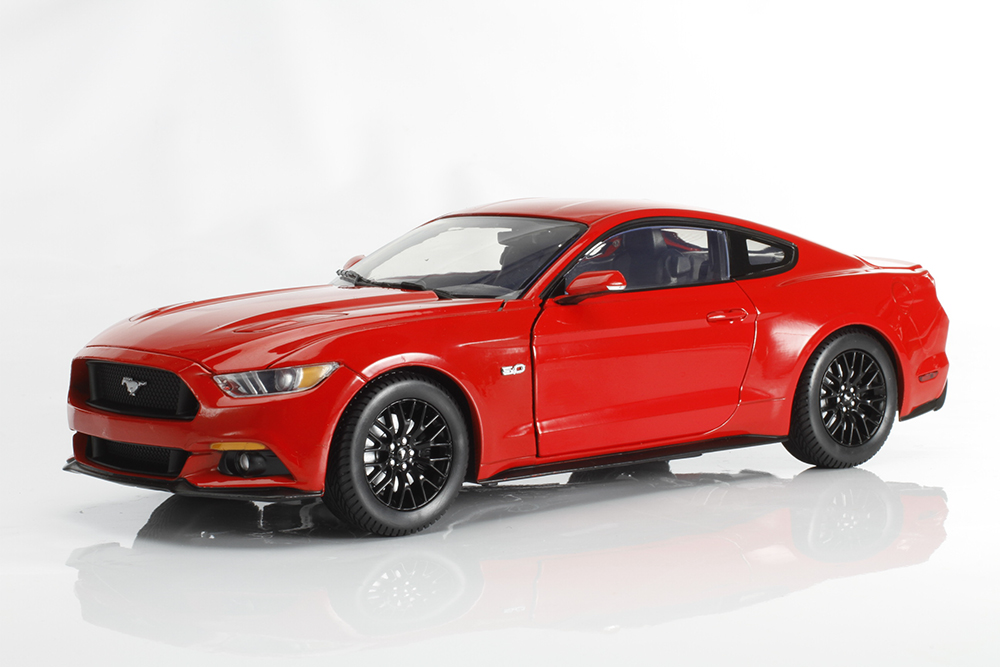 As a brand new body style, this model features obviously features all-new tooling. It is part of the Muscle Cars U.S.A. line—different than the familiar American Muscle series, starting with packaging that is a bit more sophisticated. It rides in a foam cradle rather than mounted on a plate, thus no window box. The model itself is sophisticated as well, even in this pre-production version. The muscular curves of the 6th-Gen car are captured with admirable fidelity. The V8 has a unique hood with twin ridges that suggest a power-bulge but don’t actually elevate the center section of the cowl, and twin functional air-extractor vents. 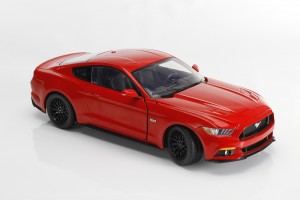 The model’s vents don’t pass through, but the surface casting is very authentic, and paint accents the edges to make them stand out further. Separately cast pieces depict the door handles and badges well. Panel gaps—particularly at the front edges of the doors—are wide on this prototype and there are a couple tooling marks on the nose, but I expect the production pieces will have those details remedied. 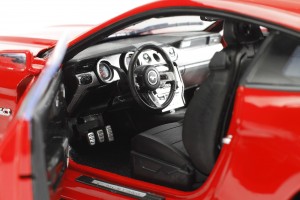 The traditional Mustang twin binnacle dashboard design has been reinterpreted for the new model; two large gauges—the tach and the speedo—dominating the primary panel in front of the driver in fairly good detail. Secondary instruments live at the top of the center stack. A stripe of metallic trim runs the length of the dash, simulated by paint. There’s finely cropped flocking on the floorboards, while semi-gloss plastic depicts the…well…semi-gloss plastic of the rest of the interior. It’s also used reasonably effectively for the seats, although I was slightly disappointed to see the base model buckets rather than the gorgeous Recaro buckets that are a must-have option on the GT. The standard seats are accurately rendered and feature folding seat backs. Pedals with the same metallic finish as the dash trim live in the driver’s foot well—three of them—which correspond to the stubby little manual shifter with a chrome collar on the lever which actuates a Getrag 6-speed manual. 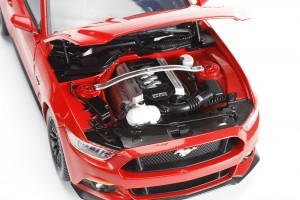 Delivering the horses to that 6-speed is the latest version of Ford’s aluminum 5.0L DOHC “Coyote” V8. This latest mill borrows heavily from the 2012-2013 special edition Boss 302 with a few concessions to mass production accounting for the 9hp drop (435 from 444)—but the new version does gain a very useful 20lb-ft of torque (now up to 400). Auto World’s scale 5.0L is very good, starting with a full 3-dimensionally molded block. It’s topped by multi-piece moldings rendering the intake plenum and runner assembly. Beneath are broad cylinder heads with nice detail on the cam covers, oil-fill cap and various vent lines. Up front is a large, white lozenge-shaped coolant overflow tank and the intake ducting. There’s a wire prop rod to support the hood, a Performance Pack chassis brace connecting the strut towers, and a sprinkling of warning and information labels screen-printed onto various parts. All in all a very sharp engine presentation. 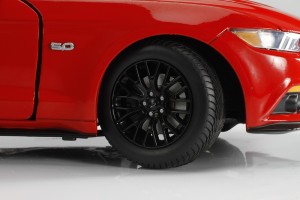 The chassis features functional coil springs at all four corners, which is accurate to full-scale now that the Mustang enjoys a 4-wheel independent rear suspension—having at last banished the rear live axle setup to the history books. Chassis detail is modest; the highlights are the rear suspension and the exhaust system. The gloss black 19-inch wheels come on Mustangs equipped with the Performance Pack (matching the strut tower brace), and they are very authentic to the stylized snowflake pattern. That performance package also specifies larger front brakes with Brembo calipers, but the model has the standard smaller unbranded brakes. Of more concern is the tires; the lack of Pirelli P-Zero sidewall markings is no big deal, but the tread encroaches on those blank sidewalls too deeply, giving them more of a snow-tire look than high-performance. But performance pack cars have wider rear tires—275s versus the front 255s—but the model uses the same tires at all 4 corners. This could be remedied for production too, but it would require a second tire mold which Auto World may be hesitant to do. 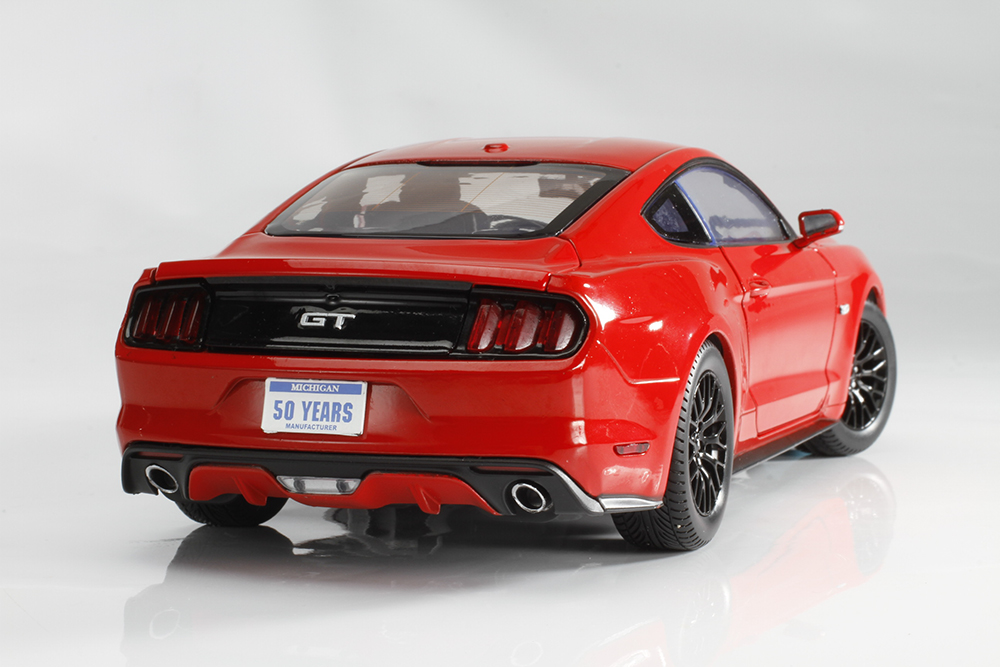 With this latest edition, the Ford Mustang solidifies its position as America’s common-man performance car. It’s a car that almost any enthusiast can afford and enjoy world-class performance on top of the nameplate’s rich history. Its approachability translates into big sales figures for a performance coupe—making it a common site on roadways. In that sense its image and exclusivity becomes somewhat a victim of its success—its specialness fades with familiarity. But that does nothing to erode its excellence—it remains just about the best performance value one can buy. Auto World’s model is a solid value as well, and as the 6th-Gen Mustang makes its way into driveways all across the country demand for its 1:18 version will only grow. Production figures on it have not been published, but there’s something to be said for being among the first to secure a quality model with strong collector potential. If you’re a faithful follower of Ford’s foundational pony-car, you’d do well to order one of these now.