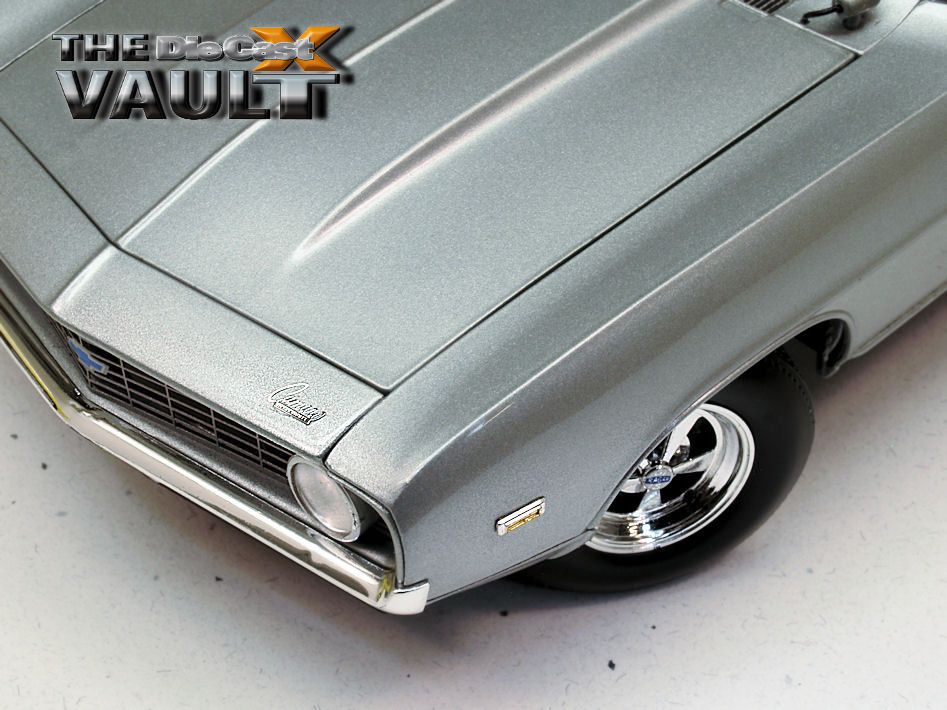 We wonder if the fellows who designed the 1969 Camaro had any inkling at all of what it was they were creating, or how much of an impact the car would have on the American car culture. Sure, there were others that got to the pony car party before it – but when it came to customs, rods, and balls-to-the-wall street racers over the years, few could hold a candle to it.

Supercar Collectibles has likewise gotten much mileage from the car in scale. Back in the day, they spec’d Ertl’s ’69 Camaro into limited editions; more recently they did a couple pieces in cahoots with the late and lamentedGMP, based on their nice Trans-Am Camaro mold set. But it’s the stuff they’ve done with Die-Cast Promotions’ 1969 Camaro that looks – at least to our eyes – like what might haul up alongside you at a stoplight.

In that regard, this pair of “Super Street” cars from a couple of years ago would certainly cause a moment of something resembling fear, if not a temporary loss of hearing. Raked, slicked, and powered by open-header 427s, both models feature opening doors, hood, and trunk, steerable, poseable wheels, a working suspension, and a rotating driveshaft. The build and finish are very good, and both cars roll out on Cragar S/S rims. We liked the head- and taillight lenses, the photoetched grilles, the foil “Camaro” badges, and the cleanliness of the applied chrome trim around the windows – it adds a neat, hand-built feel.

We also appreciated the variances in the models’ body trim and mechanicals. That’s Supercar’s greatest talent: these guys know what their audience wants, and how to deliver it. The Cortez Silver car’s toting an orange-painted 427 rat under the hood, and the Daytona Yellow has a black painted block – to “disguise” the aluminum ZL-1 427 beneath. In both cases, the engines are wired and plumbed, and topped by stock-looking air cleaners; look at the firewall and there’s even a factory chalk mark tamped on. The interiors have soft-touch tilt and slide seats, fabric belts, and tilting sun visors, and if you open the trunks, they’ve been spatter painted – and had their spares removed. More subtle differences, like the yellow car’s lack of drip rails and bow-tie emblems in the grille and on the rear, required a second look.

These things are over-the-top cool – and very limited, too. Only 252 of each were coined; those Camaro designers may not have foreseen much, but something tells us that Supercar had it all figured out.