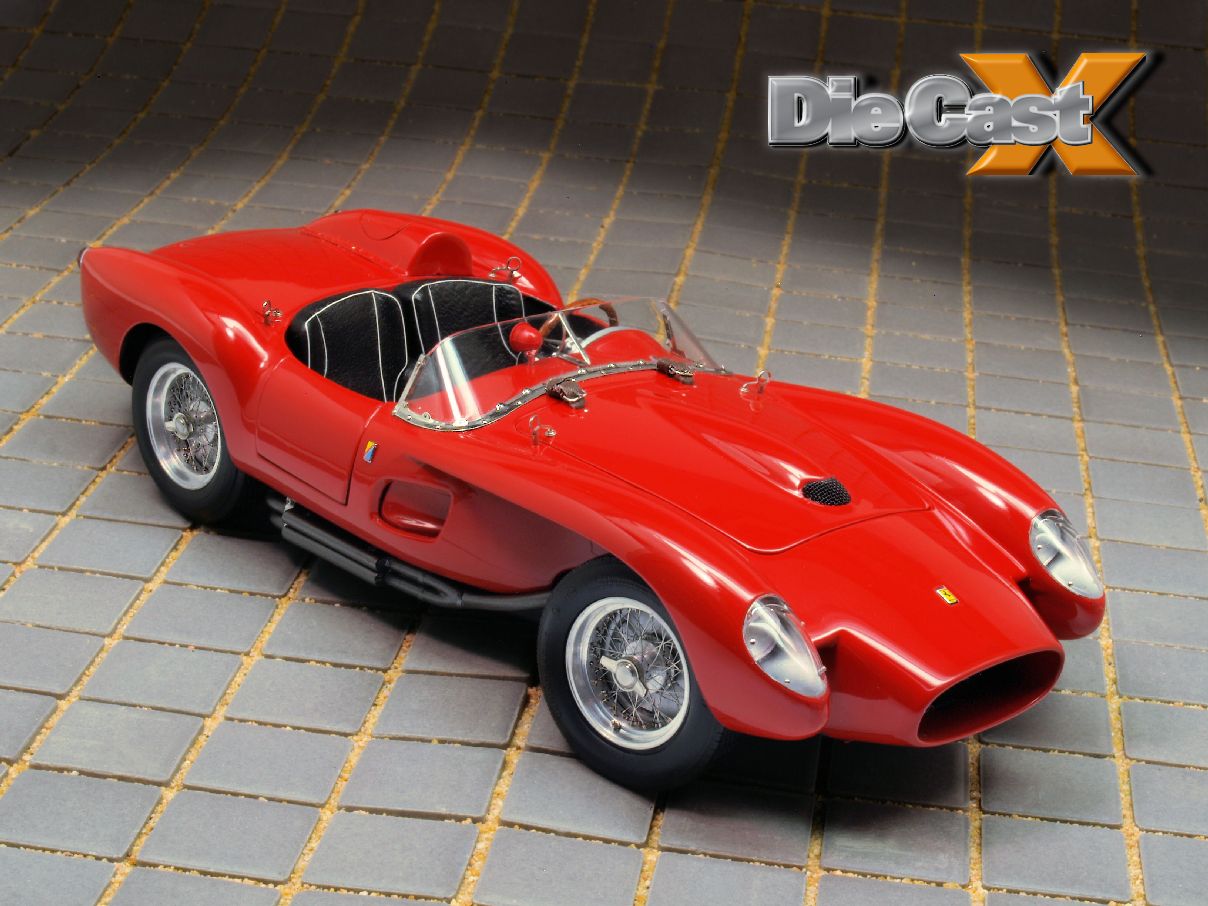 With its new Ferrari California on deck, we thought we’d take a trip back to a review of one of the coolest, deepest, and most enjoyable high-end 1:18 diecasts ever created: CMC’s 1958 Ferrari Testa Rossa. Enjoy this one, taken from “The Vault”.

There are legends, and then there are legends; cars that parted the automotive seas when they arrived, and left the world reeling in their wake when they were, finally, gone. The 1958 Ferrari Testa Rossa did that, and it still creates a feeling resembling reverence on sight.

Testa Rossa is Italian for “Red Head”, and the name was first given to the 500TR, a four-cylinder racer with a modified 1984cc F2 powerplant making 180 horsepower. The engine had its valve covers painted red – hence the Testa Rossa name. When 1958 brought a new,FIA mandated 3.0 liter displacement limit for the big dogs in sports racing, Ferrari didn’t miss a beat; they’d gotten started in 1957 by throwing a few modifications at the chassis used for the 500TRC and the 290 MM, and had installed their SOHC, 2953cc V12 – with red painted valve covers, of course. Sergio Scaglietti designed and built a pontoon-fendered body that looked unlike anything else on the track – and ran like nothing else, too. In 1958, the cars helped Ferrari earn its third Constructors Championship in a row, winning at Le Mans, the Twelve Hours of Sebring, and at the Targa Florio.

There should be a constructor’s title for model makers; if you’d like to start one, We’d heartily suggest that this latest effort from CMC be nominated for top chair. Once again, the Chinese-German company has brought out a model that’s immediately riveting, possessed of an undefined quality that causes model car folks (and most others) to just stop and stare. Of course, a lot of that has to do with the real TR’s shape, done so well here. But it’s the steel and aluminum spoked wheels, the pressed and riveted windshield base, and the leather buckles on the hood that pull you in for a closer look before you’re even aware that you’re ogling.

As usual, CMC’s put stamped metal, thin section diecast, and plastic together seamlessly, and painted the model with a smooth, polished finish. There isn’t a single flaw, either on or below the surface; the shut lines for the hinged doors and trunk are tight and even, and it, and the drop-in hood, are secured by working spring clips. The clear fairings for the headlights are “secured” with tiny hardware, and the grille and hood scoop are fitted with screens. Whoops – you’re ogling, again.

CMC loves to build in a lot of activity, and the TR’s a veritable playground for finger jockeys. Some of the working features are sweet, like the removable road wheels, loosened or secured by two-blade knockoffs, and the opening doors and trunk, which swing on realistic hinges. Below the lid, the trunk hosts a stainless steel fuel tank with a lift-up cap, and a strapped in spare; swing the doors open not so much for a look at the cockpit, but for the amazing frame and plumbing detail that’s on either side of the leather-wrapped seats. Under the dash, an incredible electrical panel is the nexus for multi-colored wires that run to the dash, stopping, we’d imagine, at the rear of the gauge cluster.

Getting to the engine is a bit of a chore – the leather straps and buckles, though oversized, are a bear to open, and we’d recommend that you do the deed once, then leave well enough alone. Besides, the spring clips will do a great job of securing the hood between visits. Once the hood’s gone, you’ll get a view of the engine that is completely unimpeded. Talk about ogling; bring a lunch – you’ll be here a while. Cabling and wire in several gauges – some if it wrapped in delicate steel jackets with fittings at each end –  runs from points unseen, out to the carbs, the coils, the distributors, and along the frame, then out of view again. The castings are painted in just-right metallics and blacks, and that historic red crinkle for the valve covers; twelve trumpets top the linked-in Webers, and CMC’s even put the red gaskets on each carb where the fuel line is secured with a banjo fitting.

The side slung exhaust is a great come-hither for the chassis; metallized pipes wind along the rails, and they’re clamped with steel bands and terminate in proper trumpets out back. Turn the car over for a real thrill: copper brake and fuel lines are fastened to the chassis with more clamps, and these break out into flex hoses that terminate in fittings at each wheel cylinder. The bottom part of that enormous fuel tank is here, and piped in, and every part of the working suspension is jointed and workable. They’ve even put a return spring – a unit sized to fit in a wristwatch –  on the brake master cylinder.

It’s easy to get excited when a new image of an historic car comes along, especially when it’s a plum car like the 250 Testa Rossa – and it’s done this well. There are a couple of bits wrong, sure – those wheels should be painted, and the windshield is a little thick; as usual, the hardware these guys use is way out of scale. But guess what? We were so busy taking in all the sights and playing around that none of that really seemed to matter. This is an amazing piece that offers up hours of enjoyment. Did that sound reverential enough?