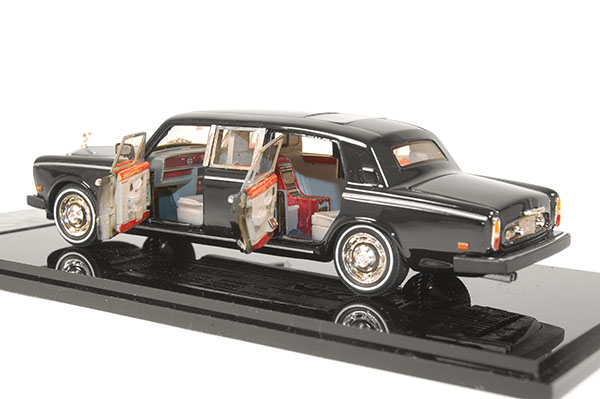 Introduced in 1965, the Silver Shadow featured unibody construction, disc brakes, independentrear suspension, and a hydraulic self-leveling system. The 1971 Silver Shadow II had improved front suspension and black energy-absorbing bumpers. Shadows were popular with companies that create stretched limousines, and ATC’s model is unusual in having only a mild 24-inchstretch. Even more unusual are the properly hinged opening doors; few models in this scale have them, and even fewer fit as tightly when closed as ATC’s do. The basic Shadow II lines are correct, as are details like the new 1971 front end, bumpers, and European-spec chin spoiler. The grille and delicate mascot are very well done, but the photo-etched window moldings look a bit too wide. Interior details include good-looking upholstery and hand-painted wood-grain dash and door panel trim, photo-etched control panels, and detailed instruments up front. There are even more photo-etched panels in the back, along with a big wood-painted console between the jump seats that houses a mirror, ice chest (and presumably drinks), and radio panel, but unfortunately, this sample’s console isn’t painted as neatly as the dash and door sills. Still, it is amost impressive model. —Wayne Moyer