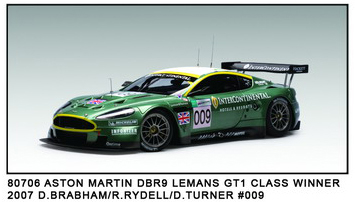 Aston Martin had not tasted victory at Le Mans since 1959, the year when some guy named Carroll Shelby took the checkered flag in a DBR1. Aston retreated from factory-sponsored racing soon after, but the company decided to return to the famed 24-hour sports racing event in 2005. In the seasons since, it must have felt like they spent another 50 years trailing the class-dominating Corvette, but in 2007 that all changed. At the wheel of the gorgeous ProDrive DBR9, David Brabham (son of Formula 1 Champion Sir Jack Brabham), Darren Turner and Rickard Rydell, managed to edge out the Corvette by a single lap after more than 2900 miles — much of the later laps in a torrential downpour.

To celebrate Aston’s historic triumph AUTOart is releasing this 1:18 replica of the winning car. The DBR9 is truly one of the most beautiful race cars in any series today — elegantly blending classic Aston grille and fender gills with the road car’s stylish tapered profile and integrating the aggressive aerodynamics needed to keep the car planted on the 200mph+ Mulsanne straight. All of that is bathed in a rich metallic green in fine British tradition. The DBR9 definitely brings class to the GT1 class, and now it brings a winners trophy too. Go to autoartmodels.com to see more or place an order.