When Ford introduced the first Thunderbird in 1955, the car was an obvious response to the Chevrolet Corvette: A sporty looking two-place convertible–not a performance monster but a boulevard cruiser. While the Vette would undergo multiple redesigns as a two-seater (with increasing abilities), Ford made a puzzling move, transforming the 1958 T-Bird into a large, boxy four seater. Sales figures proved them right, but it was such a major departure—and so soon after the original mission. 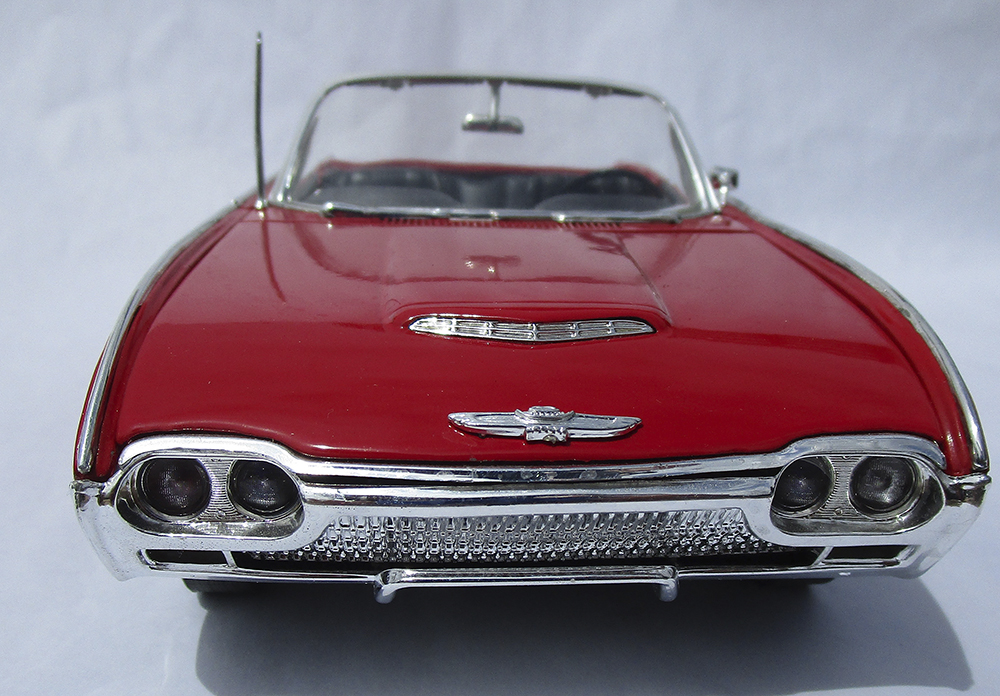 When it was time a third generation Thunderbird in 1961, Ford finally struck a balance between sporty and practical. The “Projectile Bird” (as it came to be called) had a sharply-pointed profile with smooth, uninterrupted lines. The chrome that ran across the top edge of the side also acted as the door handle, one of earliest examples of such hardware. It looked much lighter and faster than the previous car. Twin rocket engine-inspired taillights finished off the flight-themed look.

And if the new design was too practical, a solution became available in 1962 and ’63: the Roadster. Among other features, this option included of a large removable fiberglass tonneau cover that hid the rear seat and included fixed headrests for the two front passengers. When attached, the result was two fewer usable seats, a roof that somehow still worked without removing the cover, and an undeniably sexy look. 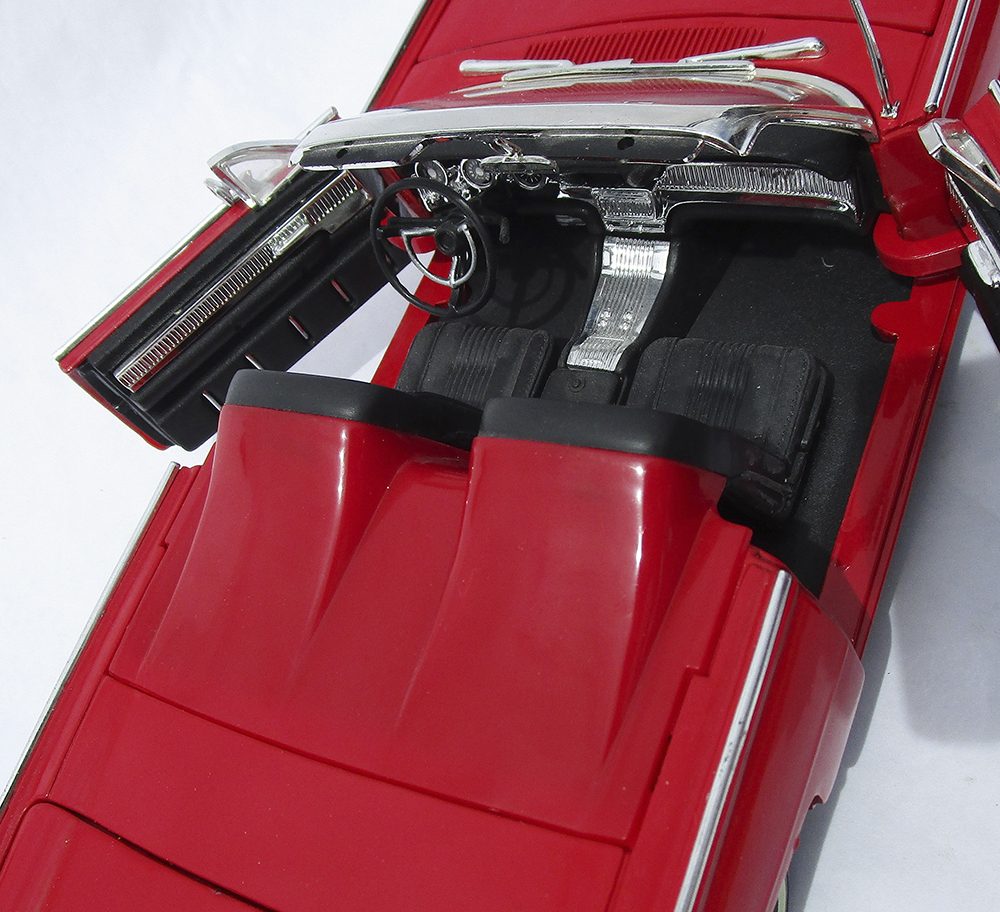 Anson made a 1:18 scale version of the ’63 T-Bird as a landau-roofed coupe, and also as a roadster, complete with removable tonneau. The model is cleverly designed to use the same base car, allowing the necessary parts to snap into place. The downside is a pair of holes in the visors where that top would attach. The cover is plastic, molded in color, which looks good on a black or white model, but on the red, doesn’t quite match the paint. 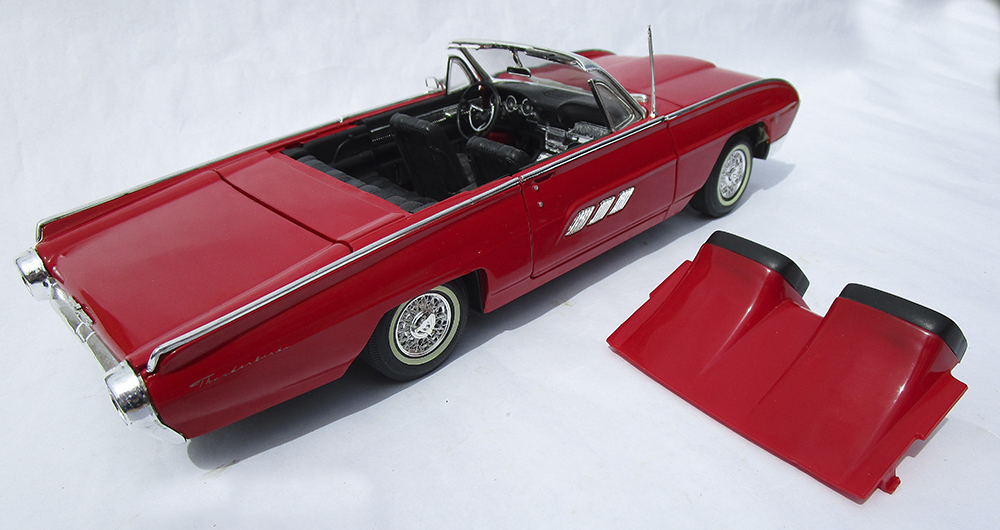 The interior does a respectable job of replicating the elaborate chrome and stainless steel that was slathered around the dash, doors and console. Just about everything else is a single color (black in this case), so there’s not a lot of visible detail. The overall proportions of the car are nice, but the chrome detail falls into two categories: chunky and crude, or painted on. The end result of both makes the car look less delicate and sharp-edged than the real thing. 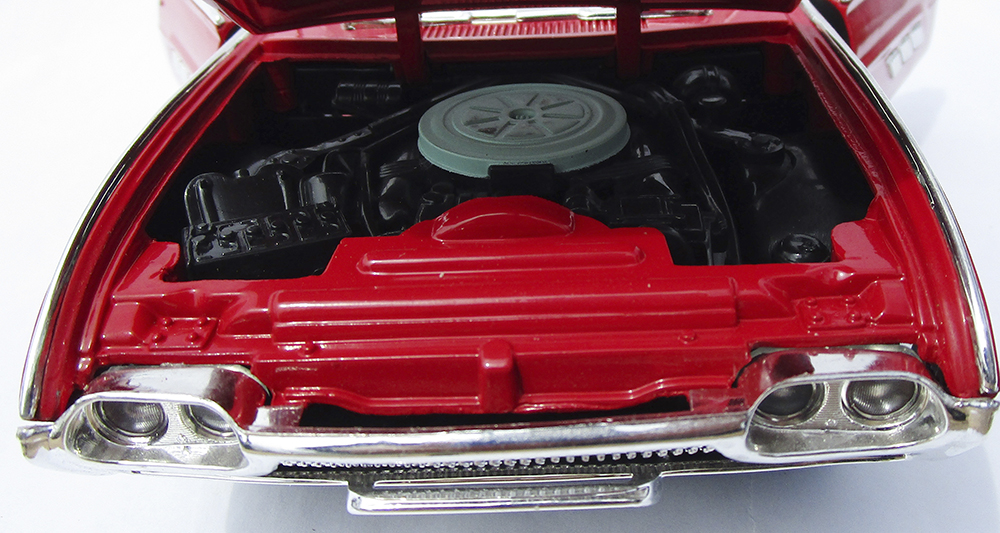 Engine detail is pretty basic, with almost everything rendered in black plastic except for the light blue air cleaner. Around back, there is an opening trunk that includes the spare tire with full chrome cover. On the real car, when operating the top, the entire trunk and boot cover lifted up, hinged at the rear of the car in a complex feat of engineering. It’s understandable that a model this size is only hinged like a conventional trunk lid. 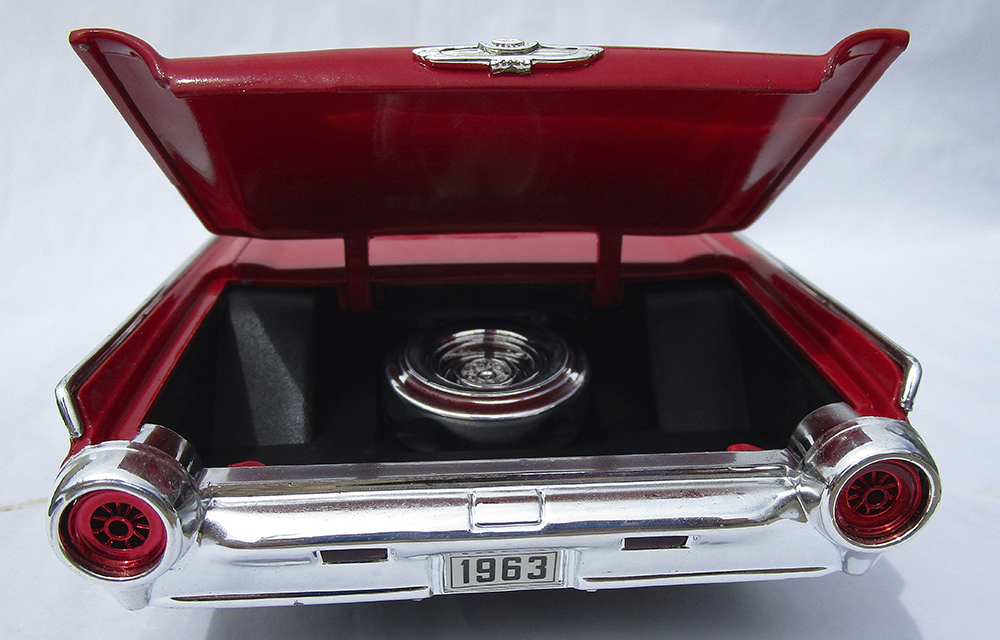 A new Thunderbird debuted in 1964, similar in theme to the third-generation car, but a bit more modern. It was available in coupe or convertible form but the Roadster option disappeared. Fearing that the car competed too closely with the newly-minted Mustang, the T-Bird would abandon any pretense of sportiness for good with its 5th generation redesign in 1967. For these two years, however, the Thunderbird Roadster recaptured a bit of its two-seat glory days and delivered a style unlike anything else on the road. 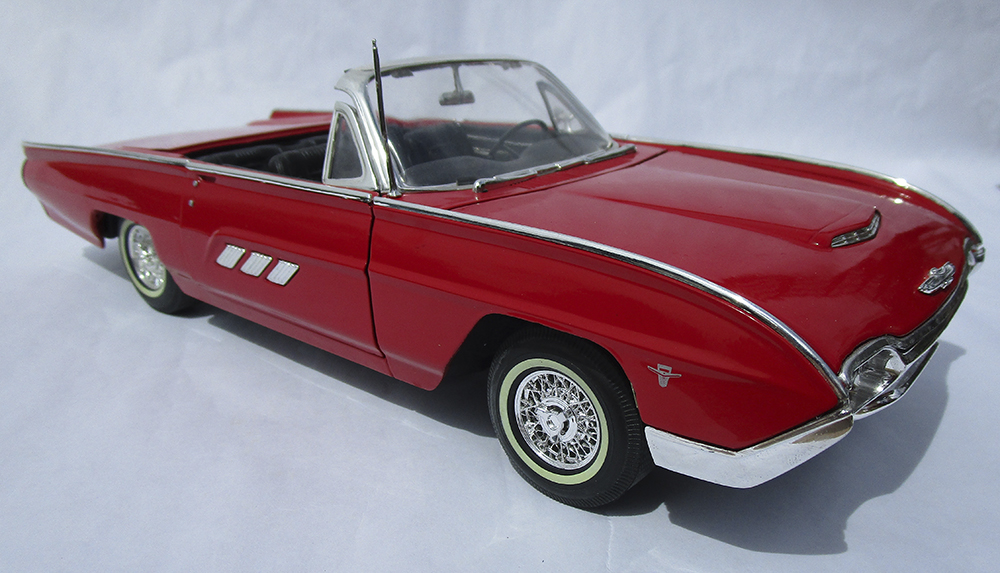 Ron Ruelle is Social Media Guy for hobbyDB.com, a website about collectibles and hobbies.