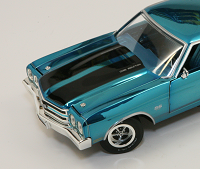 Louis Chevrolet would be proud: to celebrate the 100th anniversary of Chevrolet, American Muscle has debuted the “Chevy Centennial” collection. The series is comprised of several iconic late ’60s and early ’70s Chevrolet muscle cars, including this “Elite Edition” 1970 Chevelle SS 396. Offered in an exclusive “Le Mans Blue Chrome” finish with black stripes, this snappy repaint of one of Ertl’s classic original molds pulls you in for a closer look. The opening doors and hood work on tight shut lines, and the electric blue interior has a fully detailed dash, console, and seats, decorated to the “SS” emblems. Under the Cowl Induction hood, the 396 V8 is nicely cast, painted, and assembled. They’re each limited to only 500 pieces worldwide; American Muscle enthusiasts should consider adding this one, or all of the Chevy Centennial cars, to their collections. Happy birthday, bowtie.