THE 2 MILLIONTH ROVER IS HISTORY ON WHEELS 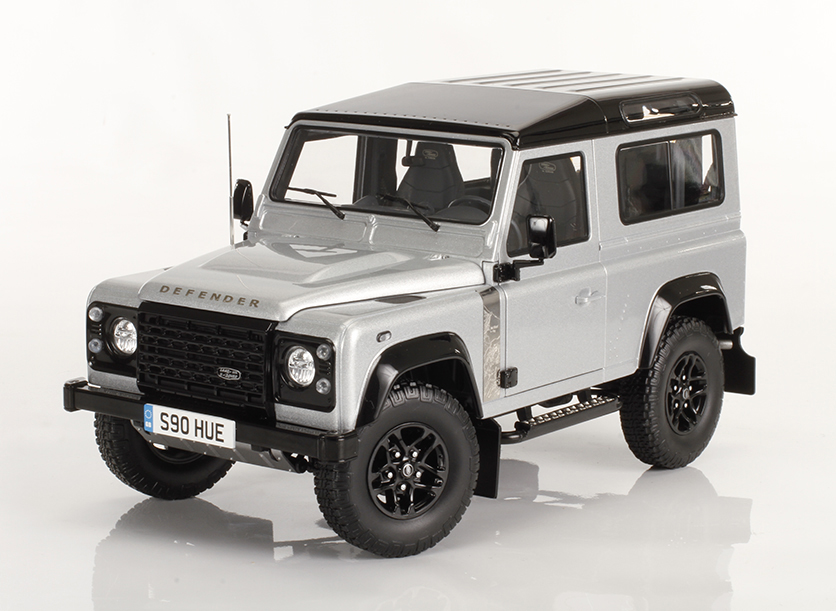 Land Rovers just don’t die. That’s a reputation that most manufacturers of rough and rugged off-road vehicles would kill for, and one that Land Rover earned the hard way over many decades—seven of them to be exact! The first of these boxy little British overland runabouts rolled out in 1948, and the model has trundled along with remarkably few changes ever since. That adherence to the fundamental design and utility embodied by the original Series I has contributed greatly to its extraordinary reliability: it was never broke, so they didn’t fix it! But that traditionalist mentality left the Defender seeming increasingly anachronistic in the face of modern competition. Under its various parent companies—which have included BMW (1994-2000), Ford (2000-08), Tata (2008-13), Jaguar Land Rover (2013-present)—several attempts have been made to discontinue the Defender and replace it with something more contemporary, but…Land Rovers just don’t die! 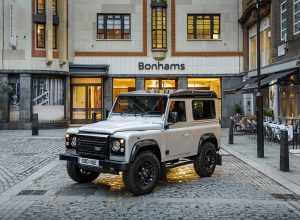 After the 2,000,000th Rover was built, Bonhams put it up for bid in a charity auction. It ended up claiming $600,000 for The Red Cross and the Born Free Foundation. (photo courtesy of Jaguar Land Rover.)

In 2015 Land Rover made a huge public relations effort to commemorate the manufacture of its 2,000,000th model. The special Defender 90 (short-wheelbase) was painted Indus Silver Satin with Santorini Black roof, grille and wheels. A special fender panel features a stylized relief map of Red Wharf Bay, the Welsh beach where legend has it Maurice Wilks first drew out the concept for the Land Rover in the sand. 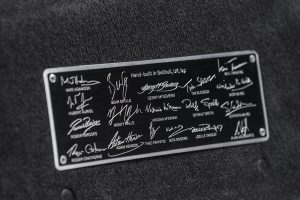 The VIP crew that hand-assembled the final pieces include a who’s who of Land Rover royalty from past and present. (photo courtesy of Jaguar Land Rover.)

The final assembly was completed by hand by a crew of nearly 20 VIPs embodying the spirit of Land Rover whose signatures are ensconced on a special plaque in the vehicle. After a press tour the vehicle was auctioned off at a special Bonhams Charity Auction to benefit Land Rover’s humanitarian and conservation partners he Red Cross and the Born Free Foundation, where it sold for $600,000—by far the highest sum ever commanded for a production Land Rover! 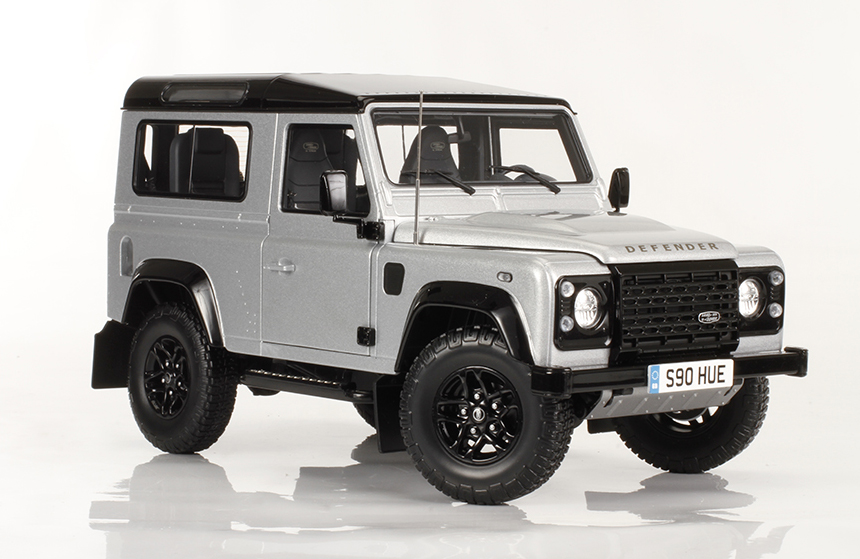 This Rover was born to be a collectible, and Almost Real’s model is the most detailed 1:18 LR we’ve seen to date.

Being one of a kind and with so many bespoke features that pay homage to the storied history of Land Rover, the “2,000,000” (2M) Edition was tailor made to be a collector’s item—both full-size and in scale. Almost Real is a new brand that’s been getting a lot of traction in the 1:18 space of late, and it has chosen to render the 2M as a limited run of 1999 pieces. Almost Real’s parent company is Sum’s Model Toys out of China, which has done model design and assembly on contract for some of the industry’s biggest names—including Kyosho, Ebbro, and Minichamps, among others. The relationship with Minichamps is especially important; now that the company has launched its own Almost Real brand it is partnering with Minichamps to handle distribution in the U.S. and Europe, meaning collectors should have access to Almost Real replicas through their favorite Minichamps dealer. 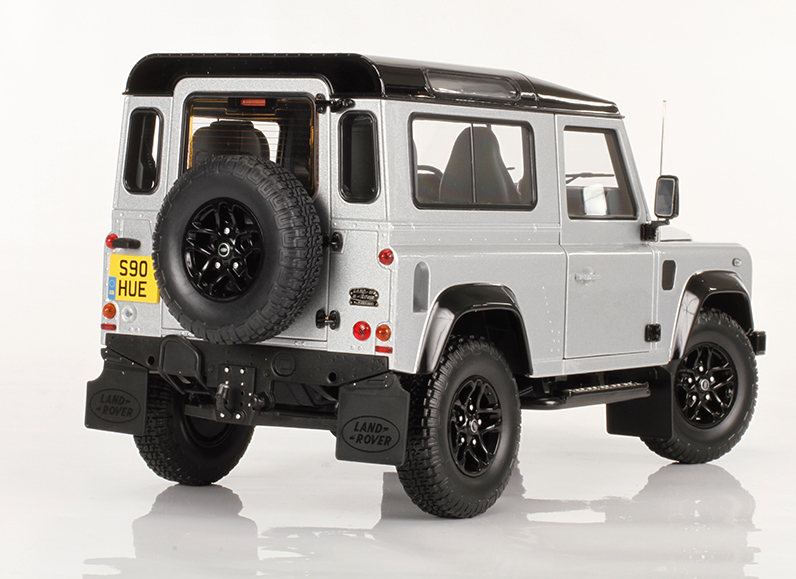 As I awaited the 2M sample I wondered how Almost Real’s Defender would compare with the Kyosho D90 I reviewed last year. I could tell from first glance that this model has a higher degree of detail in several notable areas. The boxy shape and large expanses of flat metal set forth a challenge for finish, as any paint blemish is amplified on that type of surface. Fortunately there are no such concerns here; the finish is lovely, and there is no pooling around the numerous panel lines and cast in rivets. The particles that produce the metallic sheen have a tad more sparkle than the full-scale 2M, resulting in a finish that is shinier and less satiny, but the effect is pleasant. 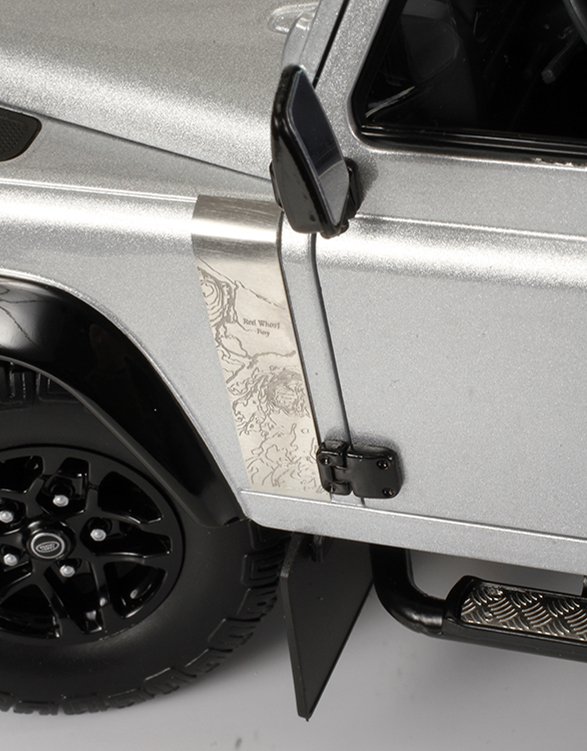 The etching detail on the map panel on the fender is amazing. It rivals the intricacy on the full-size Rover!

As you tour around the model all the little extras start to jump out at you; metal rather than plastic for the bumpers and door handles, a telescoping wire radio antenna, crystal-clear headlight lenses that clearly reveal the LED projector beam headlamps, and just gorgeous etching on the special panel on the left front fender that depicts the map of Red Wharf Bay, right down to the legible text. More etched metal can be seen just below it on the treaded running boards. The license plates read “S90 HUE” paying tribute to the original Land Rover pre-production model’s “HUE 166” plate. 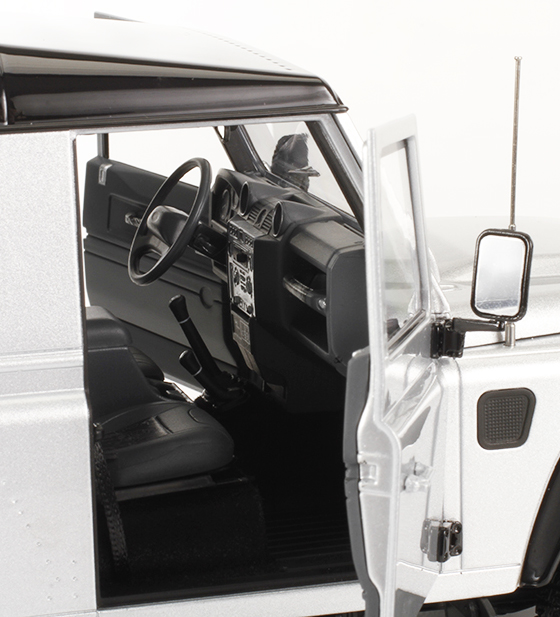 The doors open on scale, functional external hinges affixed to the body. They work well and allow the doors to open nice and wide, but they have no internal tension so they do allow the open doors to swing back and forth so be sure to snap them shut (they have nice firm detents) before handling the model. With them open you can see the familiar, upright cabin of the Defender. 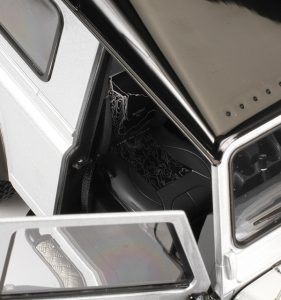 The center stack is nicely detailed, and the pair of gear levers—one to row the Ford-sourced 6-speed manual and one to engage the 2-speed transfer case for the 4WD—look just right. The instrument panel is a bit light on detail though. But really the thing that commands attention in the interior is the special seats with their pattern inserts also depicting Red Wharf Bay. The headrests also have a special inscriptions reading “Land Rover No. 2,000,000.” 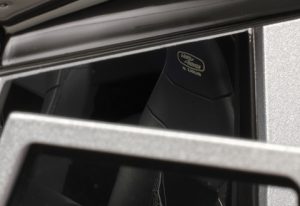 But the coolest extra on the 2M is difficult to see with the naked eye and impossible to photograph! Affixed to the back of the driver’s seat base (near the left rear passenger’s feet) is the panel depicting the signatures of all the celebrity VIPs that helped assemble this special Defender. You can only really see it by peering carefully through the right rear window, but it is fantastic that Almost Real captured it in scale. 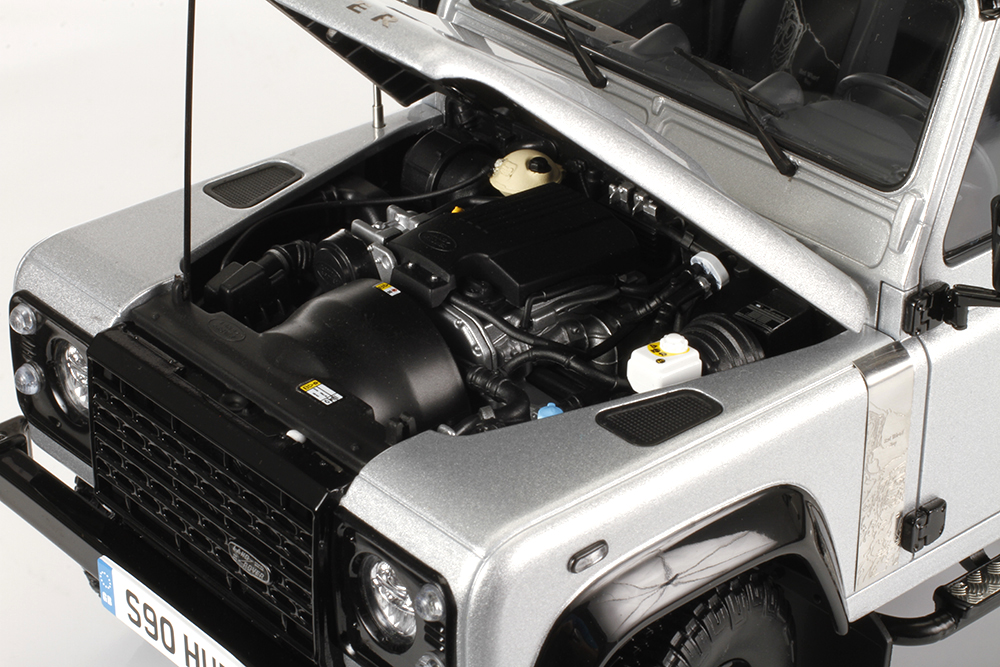 The hood can be opened almost vertical, but as with the doors its scale hinges have no internal tension so a wire prop rod swings up from the radiator housing to support it. You might be surprised to learn that a Defender that sold for $600k has the regular production 2.2L Ford Duratorq 4-cylinder turbodiesel churning out all of 120hp, but Land Rovers have never been about speed. Its 265 lb-ft of torque is enough to let it climb like a mountain goat—though the chances that this particular Rover will ever see any surface rougher than a museum floor is effectively nil. Almost Real lives up to its brand name underhood. All manner of hoses, lines and fittings weave their way through the top half of the engine bay, but the metallic painted block below is clearly visible and has excellent texture. Extras abound: coolant overflow containers have lines properly routed and the brake booster has authentic markings. 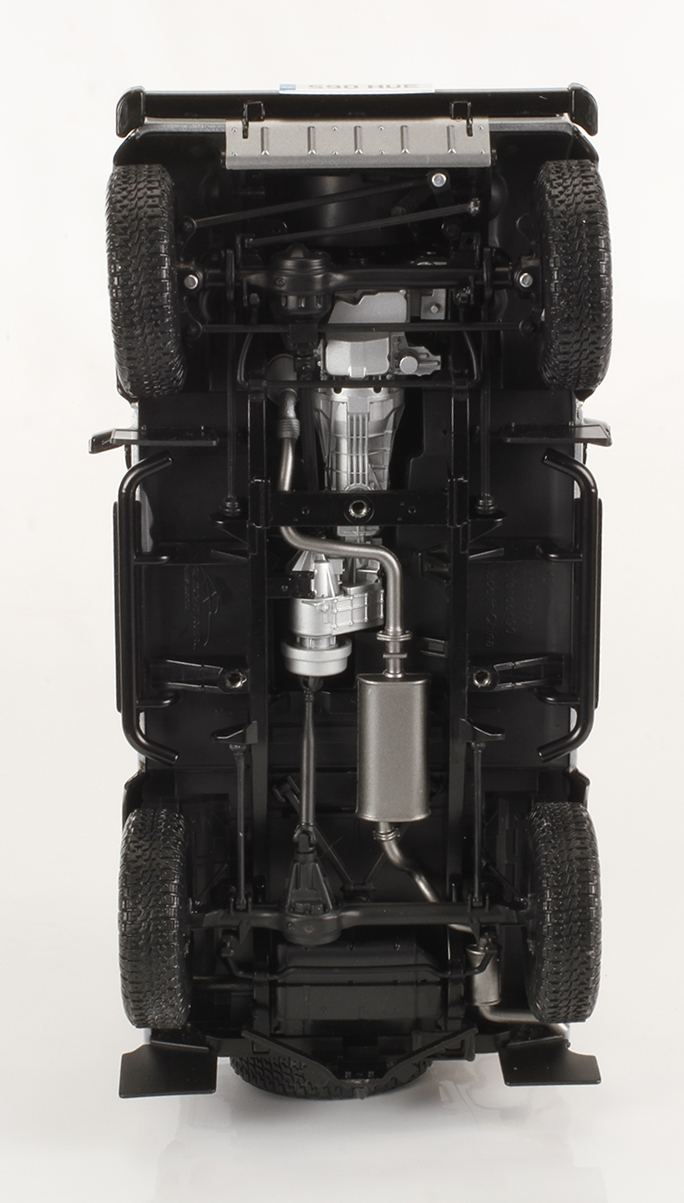 The biggest change separating Defenders like the 2M from their spiritual forbearers is the suspension. Starting in 1983 Land Rover inherited the coil spring suspension from its well-to-do cousin the Range Rover, and those underpinnings persist through to the 2M Edition. On the model, front and rear solid axles in cast metal ride on functional coil springs with associated linkages made of nicely molded plastic. The ladder-style frame is cast metal as well, and between its rails sits a nicely detailed transfer case connected to the Land Rover’s signature offset driveline. The glossy black wheels and off-road tires look quite  accurate to the 16-inch five double-spoke rims and Goodyear Wranglers on the full-scale version, minus the sidewall markings. 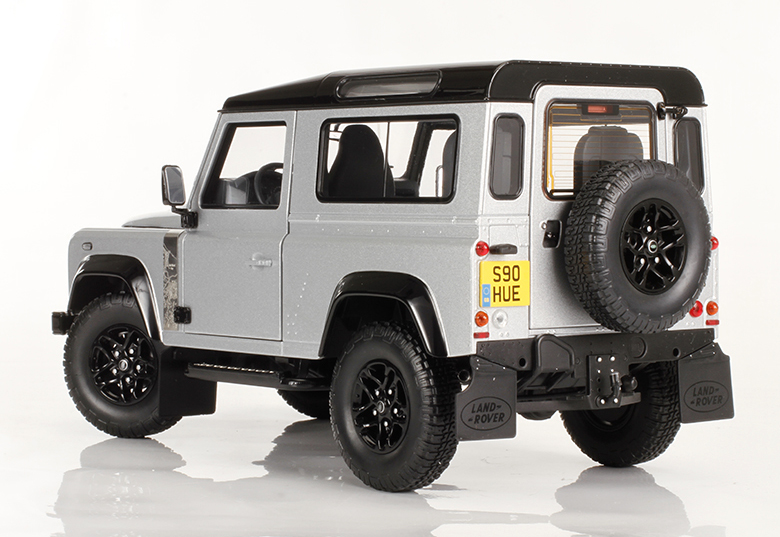 The excitement at the celebration of—and the auction price commanded by—the 2M Edition was in part due to the announced conclusion of Defender production in January of 2016. After 68 years of continuous production, the curtain was finally dropping on the classic LR. Except…Land Rovers just don’t die! In January 2018 it was announced that the Defender would be returning for one more curtain-call with a special 70th Anniversary Edition of 150 new models stuffed with a 400hp Jaguar 5.0L V8 and retailing for nearly $200k each! It just goes to show that the original Land Rover has a following as devoted as any vehicle ever made, and they remain in high demand 70 years after the first rolled off the line in Solihull, England. This model represents the most detailed 1:18 replica that we’ve seen to date of the iconic 4-wheeler. The extra cachet of this one-of-a-kind 2-millionth production model only enhances the appeal of what is already an exquisite collector piece.